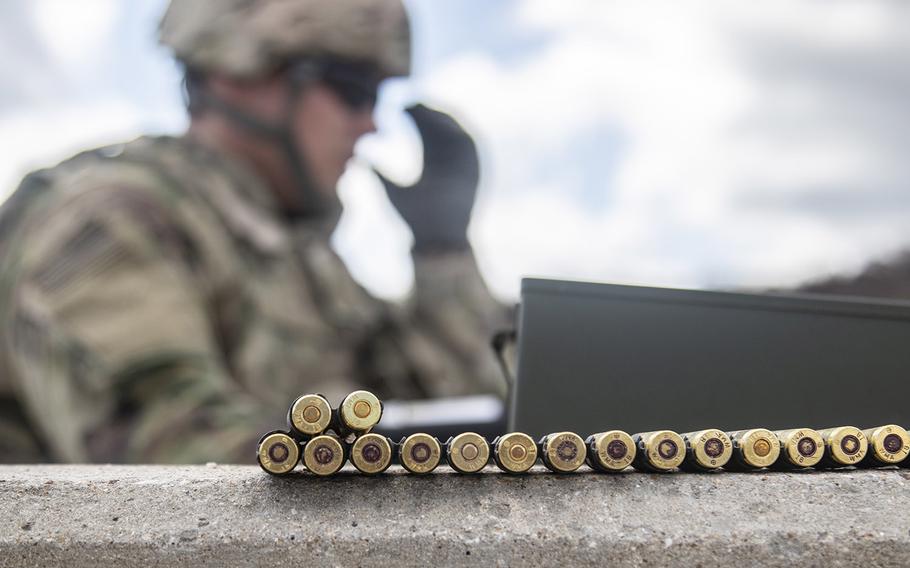 After a morning of zeroing their weapon systems, Red Bull Soldiers of the 34th Infantry Division take up a good prone firing position to qualify on the M240B, a medium-size machine gun, and the M249 a light machine gun, on the range at Fort Hood, Texas. The Red Bulls are completing pre-mobilization training before deploying to the Middle East in support of U.S. Central Command's Task Force Spartan Shield. (U.S. Army photo)

The Fort Bragg, N.C.-based 2nd SFAB will deploy in the spring to train and advise Afghan security forces across the country in its 18th year of war. The Army announced the about 800-soldier unit’s deployment in a statement that included upcoming rotations for several other units later this year and in 2019.

The adviser brigade’s deployment will come several months after the Fort Benning, Ga.-based 1st SFAB is expected to return home from Afghanistan, an Army official said. The official, who is not authorized to discuss sensitive deployment details and spoke on the condition of anonymity, said other forces would be used to ensure the training mission continues during that time gap.

The official said the Army wanted to provide the 2nd SFAB a full training cycle to prepare for the mission. The 1st SFAB, which arrived in Afghanistan in late February, was deployed before it could complete a full training cycle, though unit officials have said it was sufficiently prepared for the rotation.

Brig. Gen. Donn Hill, the 2nd SFAB commander, said his unit has been working hard to prepare for an overseas mission since it was established early this year. The full brigade will complete a rotation at one of the Army’s major training centers before the deployment, he said.

“We will build upon the success of the 1st SFAB and allies as we partner with Resolute Support forces and Afghan National Security Forces to build long-term stability through credible and ready security forces,” Hill said in a prepared statement. “Our partnered security forces successes in the future will define our own.”

Top military officials have praised the work of the 1st SFAB during its time so far in Afghanistan.

The unit has spread its battalions across Afghanistan to train and advise Afghan army and police units in their fight with the Taliban. Its soldiers were the first American servicemembers since 2014, when the United States announced the end of its combat mission in Afghanistan, to work directly with Afghan kandaks – battalion-sized, front-line fighting forces.

“I am extremely pleased with the performance of the 1st SFAB, and what they have done on the ground,” Army Gen. Joseph Votel, the U.S. Central Command chief, said last month. “And I think that the proof is really in the pudding when you talk to our partners out there, the Afghans, and what they are seeing out of this.”

Ultimately, the Army intends to build six security force assistance brigades, officials have said. It is in the process of building its third, stationed at Fort Hood in Texas.

While the SFABs are built to provide train, advise and assist capabilities to partner forces across the world, Army officials expect most will focus on Afghanistan for the near future.

Fort Hood’s 1st Cavalry Division Headquarters and the Fort Bliss, Texas-based 1st Armored Division’s Combat Aviation Brigade will deploy to Afghanistan in early 2019. The 1st Infantry Division’s Sustainment Brigade, based at Fort Riley in Kansas, will deploy there this winter, the Army announced.

Other units deploying are: