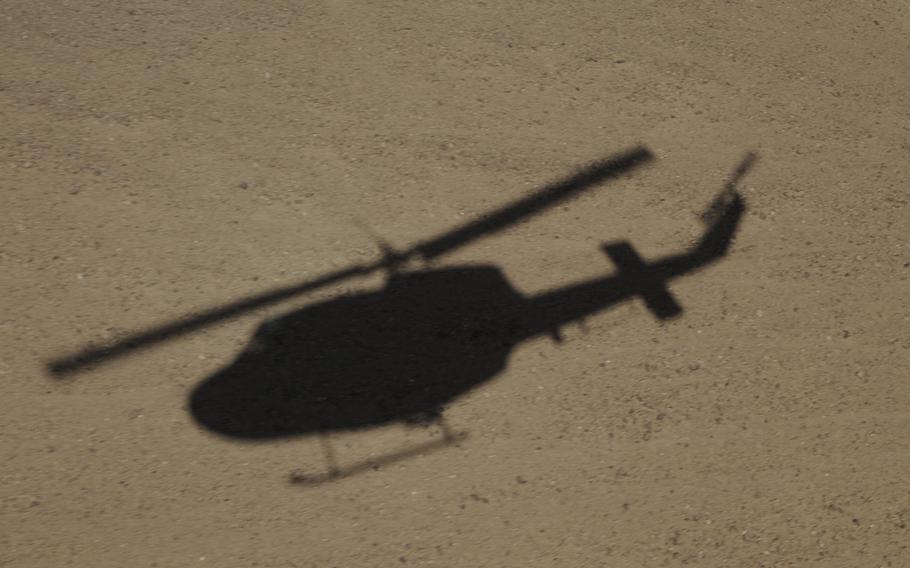 The shadow of an International Security Assistance Force helicopter is seen as it flies over western Afghanistan during a mission, Oct. 6, 2008. (Laura K. Smith/U.S. Air Force)

Five servicemembers with the International Security Assistance Force were killed in a helicopter crash in southern Afghanistan Saturday in the deadliest day for coalition troops since another helicopter crash killed six troops in December.

"ISAF is still in the process of reviewing the circumstances to determine more facts," an ISAF news release said. "Our thoughts and prayers go out to the family and friends affected by this tragic event."

The United Kingdom’s Defence Ministry told The Associated Press that the helicopter was British, but could not confirm the nationalities of the dead.

It is ISAF policy to defer casualty identification to the relevant national militaries, which usually wait to announce any information until next of kin have been notified.

The helicopter crashed in Chaghrai area of Takhta Pul district, according to an official at the Kandahar provincial governor's office.

Qair Yousuf Ahmadi, a Taliban spokesman responsible for southern region of the country, told Stars and Stripes that the insurgent group was responsible for bringing down the aircraft, but no confirmation has been made.

Accidents, however, have caused the vast majority of aircraft crashes in Afghanistan, and military helicopters belonging to the NATO-led coalition have accounted for most of the overall losses.

In January an aircraft accident in eastern Afghanistan claimed the lives of two ISAF servicemembers and a civilian working with the military.

International forces have relied on aircraft – especially helicopters – to overcome Afghanistan's remote and rocky landscape and to avoid threats like roadside bombs.

Early 2013 saw a spate of deadly crashes in Afghanistan, including at least two helicopters and three aircraft. No enemy activity was reported in any of those cases.

Zubair Babakarkhail and The Associated Press contributed to this report.