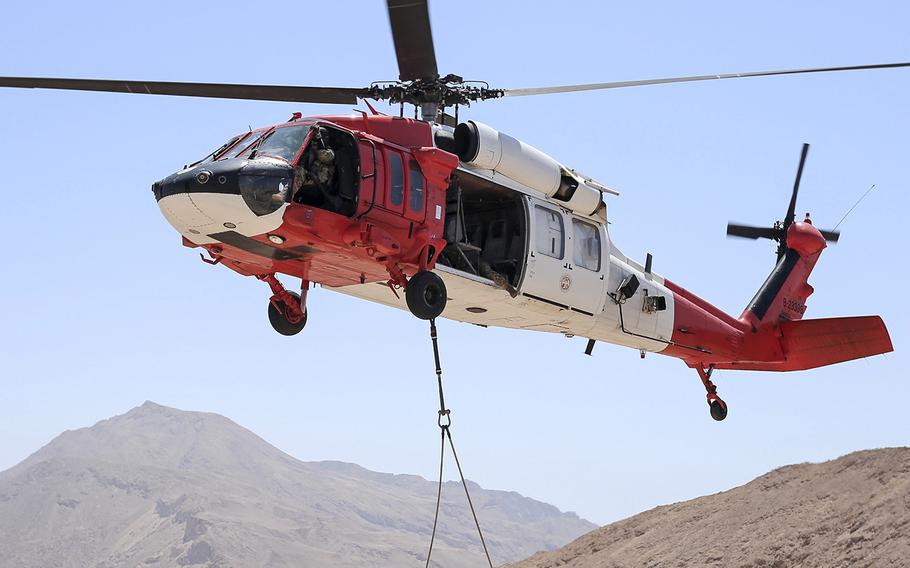 A Black Hawk of the Multinational Force and Observers. The international force that monitors the Israeli-Egyptian peace agreement said Thursday, Nov. 12, 2020, that eight peacekeepers, including six Americans, were killed when one of its helicopters crashed during a routine mission in Egypt's Sinai Peninsula. (Task Force Sinai)

Seven service members were killed, including five Americans, when a helicopter carrying international peacekeepers in Egypt crashed near the southern tip of the Sinai Peninsula on Thursday.

“We are deeply saddened by the loss,” the Multinational Force and Observers said in a statement. “This included one Czech, one French, and five U.S. MFO members.”

The U.S., France and Czech Republic are among 13 countries that provide military personnel to MFO, which since the early 1980s has monitored the Israeli-Egyptian peace accord signed in 1979.

Eight people were on board the helicopter. The only survivor, an American, was medically evacuated, MFO has said.

“We wish the one U.S. MFO member who survived the crash a speedy recovery,” the organization said.

“We are saddened by the loss,” Acting Defense Secretary Chris Miller said in an earlier Pentagon statement citing a slightly higher toll. “Yesterday we recognized the sacrifice of millions who have defended our nation, and today we are reminded of the last full measure our warriors may pay for their service.”

The crash happened near the Red Sea resort town of Sharm el-Sheikh during a routine mission, MFO said in a statement.

The organization’s Egypt headquarters and logistical hub, South Camp, is located on a bluff near the town, overlooking the sea.

The U.S. provides eight UH-60 Black Hawk helicopters and a C-12 Huron plane to the mission for reconnaissance, transport, medical evacuation and other purposes, the MFO website says.

The crash was apparently caused by a mechanical failure, the peacekeeping mission said in its latest statement.

The Americans on the helicopter were National Guardsmen, an Israeli official told the Washington Post.

The injured American was evacuated by the Egyptian military and transferred to an Israel Defense Forces aircraft near Eilat, the Israeli official said. The soldier was taken to the Soroka University Medical Center in Beersheba, Israel, The New York Times reported.

The survivor was in critical condition, the Czech military said in a statement expressing condolences to the family of its killed soldier.

The Israeli and Egyptian officials spoke on condition of anonymity because they were not authorized to speak to the media on the matter.

MFO, which is based in Rome, said all indications were that the crash was an accident. An investigation is being launched, it said.

The Pentagon is in close contact with the force’s leadership and is prepared to support the investigation, spokesman Jonathan Hoffman said on Twitter.

The U.S. Army provides about 450 troops to the MFO mission, including senior members of its leadership, the MFO website says. Known as Task Force Sinai and made up of active-duty, reserve and National Guard members, the American contingent is the largest of the force of around 1,150 troops.