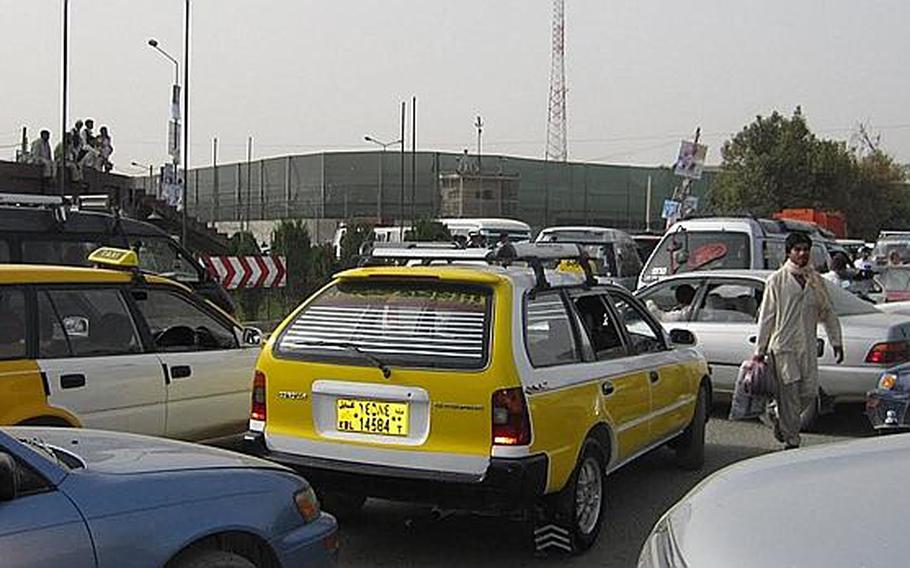 Traffic is a big problem in Kabul, where problems like narrow roads and too many vehicles are further complicated by vague interpretations of the rules of the road. (Photo courtesy of Abhi Bhasin)

Traffic is a big problem in Kabul, where problems like narrow roads and too many vehicles are further complicated by vague interpretations of the rules of the road. (Photo courtesy of Abhi Bhasin) 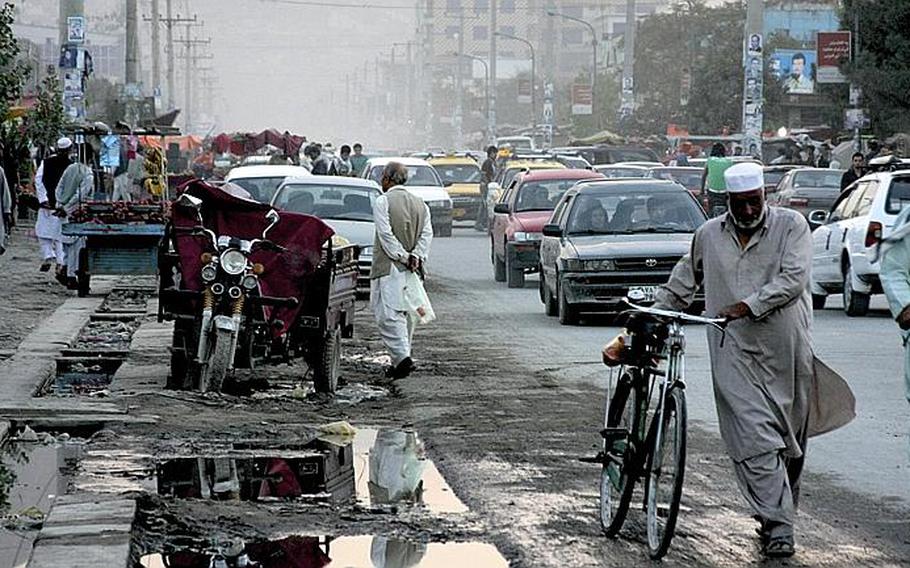 Traffic is a big problem in Kabul, where problems like narrow roads and too many vehicles are further complicated by vague interpretations of the rules of the road. (Photo courtesy of Mark Reidy)

KABUL, Afghanistan &mdash; If Hollywood had plans to film &ldquo;The Fast and the Furious: Kabul Surge,&rdquo; the midnight-blue Toyota Corolla that pulled up next to me looked primped to audition for a role: lustrous steel rims, wafer-thin racing stripes, shark-fin spoiler and mud-black windows, the better to thwart sunshine and stares.

My cab had arrived.

I slid into the backseat and gave my destination to the driver, a man in his early 20s with a coil of dark hair and a smile so white his teeth appeared to glow.

I expected him to crank open a canister of nitrous oxide with a toreador&rsquo;s whip of the hand, lock me in a stone-cold gaze and utter a suitably inane catchphrase to complete the &ldquo;Furious&rdquo; vibe. Something like, &ldquo;Feel the surge, bro.&rdquo;

He instead said nothing and began picking his way down the potholed dirt road as though the car were made of crystal. We inched over speed bumps with such care that I wondered if he&rsquo;d mistaken me for a pregnant woman, worrying that any jolt might cause my water to break.

In other words, despite his taxi&rsquo;s outward bravado, he drove like pretty much every other Kabul cabbie.

Their caution is forgivable. Most pilot bruised, aging Corollas with shocks that don&rsquo;t seem so much shot as imaginary, and many roads here are not only unpaved but stubbled with stones as big as beer kegs. The effect is akin to riding in a horse-drawn carriage down a dry riverbed.

We bounced along in silence for a couple of minutes. Then he flipped a switch and everything changed.

No, it wasn&rsquo;t nitrous. He flicked on a DVD player with two screens &mdash; one built into the dashboard for him, one affixed beside the rearview mirror for passengers.

The dark panels brightened with Nelly&rsquo;s video for &ldquo;Body on Me.&rdquo; Women wearing substantially less than burqas moved on the screens in a way that, I surmised, the Taliban would deem not very Taliban-y.

This was not like pretty much every other Kabul cabbie.

On one hand, I was heartened that my driver felt unafraid to play a video that defied the Taliban&rsquo;s oppressive, brutish, myopic worldview.

On the other, it would be a stretch to call Nelly&rsquo;s worldview enlightened. If the Taliban ever decided to write a rap song and acknowledged that women exist &mdash; I&rsquo;m not sure which is less likely &mdash; &ldquo;Body on Me&rdquo; might be the result. A sample of the low IQ lyrics:

Tryna get in those drawers/and bang it out til the mornin&rsquo;

I can already tell that you want it/&rsquo;cause you&rsquo;re shakin&rsquo; it all for me

I asked my cabbie if he ever worried that a passenger would see the video in his car and report him to the Taliban. He laughed.

&ldquo;No, I don&rsquo;t worry,&rdquo; he said, looking at me in the rearview mirror. &ldquo;I just like the music. Nelly &mdash; he&rsquo;s good.&rdquo; His eyes went back to the screen.

She slicker than loddy doddy/she work her body body ...

A band of insurgents staged an attack on the U.S. Embassy in Kabul in mid-September, firing rocket-propelled grenades and automatic weapons at the compound from a half-built high-rise they infiltrated.

Days before the assault, in a face-plant of bad timing, Ryan Crocker, the U.S. ambassador to Afghanistan, identified traffic as the biggest problem bedeviling the nation&rsquo;s capital.

In the wake of the deadly embassy siege, news wags tweaked Crocker for his comment. But as my cabbie steered through the constipated streets a few days later, I found myself agreeing, sort of, with the ambassador.

Traffic may not be Kabul&rsquo;s biggest problem, but it&rsquo;s a huge one.

The dilemma isn&rsquo;t simply a matter of narrow roads and too many vehicles. Drivers here treat lanes as vague notions rather than demarcations of which side of the street to stay on.

Cars and motorcycles jostle with rickshaws and bicycles in a crazed jumble, as though everyone found out only that morning the city has roads. It&rsquo;s like watching schools of fish swim through each other, only with collisions.

I told my cabbie the traffic patterns didn&rsquo;t make much sense.

This was true. I wished more drivers were watching Nelly.