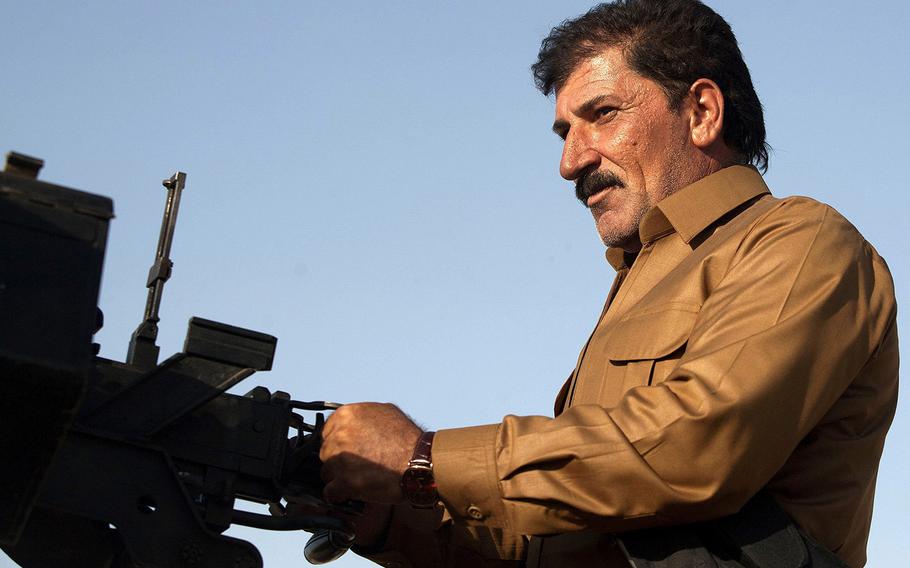 A volunteer dressed in traditional Kurdish garb shows off his Russian-made Dushka heavy machine gun Aug. 7, 2014 at the front lines in Kalak, west of the Iraqi Kurdish capital Irbil. Kurdish Pershmerga were gathered there, facing militants from the Islamic State just a little over a mile away. (Mitchell Prothero/MCT)

WASHINGTON — Iraqi Kurds are calling for powerful weaponry to help them battle Islamic State insurgents, but U.S. and Iraqi politics, combined with doubts about the Kurdish forces themselves, are causing a holdup, experts on the region say.

A retired U.S. general who spent years in Iraq and returned Thursday from his most recent trip to the region said leaders of the peshmerga, Kurdistan’s armed forces, told him that as their fighters battle to retake ground lost earlier this year to the militants, they have a number of pressing needs.

At the top of the list, said Lt. Gen. Michael Barbero, is artillery, antitank weapons and counter-IED equipment. U.S. airstrikes since August are helping, but U.S. supply lines are not, despite an announcement months ago that U.S. heavy weapon deliveries would begin.

“I asked the peshmerga leaders point blank, ‘Are you getting what you need from the United States?” said Barbero, who ran the U.S. military training effort in Iraq from 2009 to 2011 and now is doing business with private parties in the region. “They just kind of grimaced and said no.”

The United States has coordinated with the government of the Kurdistan region for years, seeing it as a haven of stability and a more reliable partner than the Iraqi central government. Yet the United States has been wary of overly strengthening the region’s hand and thereby threatening the unity of the country.

Baghdad, which exercises limited authority over Kurdistan, is eager to control the weaponry the region receives — ironically endangering all of Iraq, Barbero said.

“Our policy of ‘One Iraq, and everything goes through Baghdad’ does not reflect the reality on the ground,” Barbero said. “The reality is that the Kurds have a [620-mile] front with ISIS and they are fighting them every day and taking casualties.”

A barrier to swifter delivery of weapons, said national security scholar Anthony Cordesman of the Center for Strategic and International Studies, is the difficulty of assessing needs and distributing weapons without an adequate U.S. adviser force.

The Obama administration has repeatedly told the American public that ground forces would not return to Iraq.

Some of the advanced weapons may require significant time for training, and the United States will have to find a way to minimize the chance the armaments will be captured or misused, he said.

A small advisory corps working only with high-level Kurdish and Iraqi government commanders may not cut it, he said.

“If you’re going to do this at all you need to have advisers who are forward,” Cordesman said. “You don’t need to put in combat units, but you can’t do this from there rear.”

Kurdish retreats this summer in the face of the Islamic State onslaught cracked the illusion of the seasoned fighters near invincibility against other contenders in Iraq.

While the peshmerga has pointed to a shortage of heavy weapons as the reason, other factors are in play, said Michael Rubin, a defense analyst for the American Enterprise Institute.

“The Kurds need to acknowledge why they have done so badly,” said Rubin, who oversaw Iran and Iraq policy for the Pentagon during the George W. Bush administration. “It’s primarily because of corruption.”

Instead of shoring up their region’s defenses both with equipment and good leadership, Kurdistan’s leaders have focused on filling foreign bank accounts and buying properties overseas, he said.

When pressed, the peshmerga has recently needed the help of the Kurdistan Workers’ Party, or PKK — leftist guerrillas the United States classifies as terrorists who operate primarily in Syria and Turkey — to get them out of jams.

So arm the Kurds to help in the fight against the Islamic State, Rubin said, but don’t make it a gift.

“I would suggest that the Kurds should pay for that weaponry,” he said. “Forcing the Kurdistan regional government to pay for that makes it significantly less likely to be sold off.”