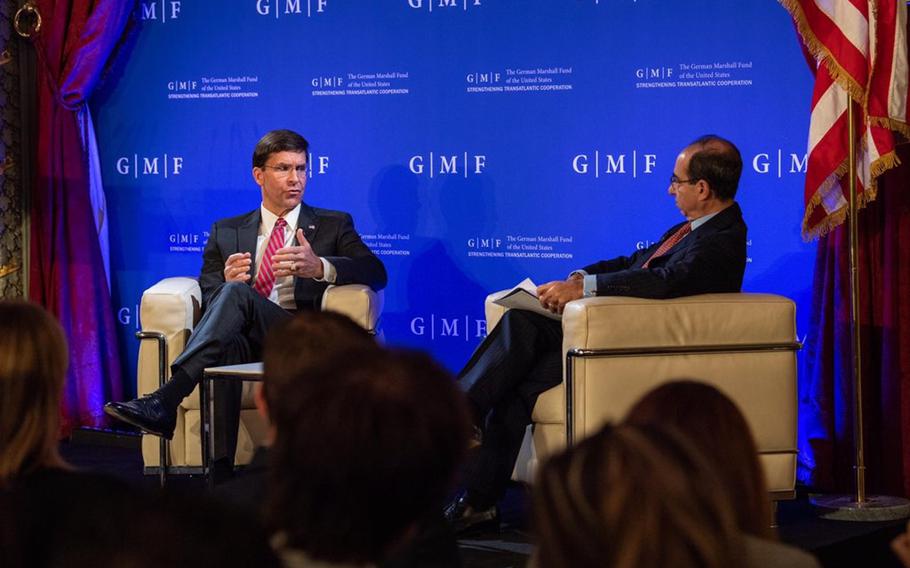 Esper also pushed back against critics who said the U.S. enabled Turkey’s advance into Kurdish-held Syria and named China’s ambitions as the West’s greatest long-term concern, during a wide-ranging talk at the German Marshall Fund in Brussels.

Esper, who spoke hours before the start of high-level talks at NATO headquarters, said he was looking for “serious and credible commitments” from allies to deter Iran. Military assets such as added air defenses are among the capabilities Esper wants.

“The burden cannot be shouldered by the United States alone … we urge our allies in Europe to contribute their own support to deter Iranian aggression,” Esper said.

The U.S. deployed fighter squadrons, an air expeditionary wing and other personnel to Saudi Arabia recently and has sent other units to the region since May, when U.S. officials said that intelligence reports indicated Iranian threats to U.S. interests and personnel.

While crises in the Middle East abound, including Turkey’s “unwarranted incursion into Syria,” such issues risk a “sap of resources” and distraction from bigger dangers, he said.

“There are new threats on the horizon that we ignore at our own peril,” Esper said.

For allies in Europe, Russia has been the top security concern in recent years, but Esper warned that China’s economic ambitions outweigh the threat posed by Moscow.

“China first, Russia second,” Esper said. And that applies not just to allies in the Pacific, but also in Europe, he said.

Both countries, Esper said, want to “reshape the world” and undermine the “rules-based order” at the expense of the West.

While Russia is a military threat, Europe must be cautious about locking into deals connected to China’s “One Belt, One Road” global trade plan that could put Beijing in a position to dominate and set the global agenda, Esper said.

Esper also warned allies against making deals with China’s Huawei telecommunications company, and that if Chinese 5G technology becomes the norm in Europe it will hinder U.S. military cooperation on the Continent.

“If Huawei becomes the provider of choice [for 5G services] it’s going to seriously affect our ability to share intelligence,” Esper said.

In Brussels, allied defense ministers are expected to agree to update baseline requirements for telecommunication security. They would require members to put in place options to restore systems in case of a disruption or outages, and to prioritize network access for national authorities during a crisis. NATO states also are expected to consider the risk of foreign ownership of telecommunications systems.

Although the longer-term threat posed by China has increasingly become a NATO focal point, defense ministers are likely to be consumed this week with the crisis in Syria.

Esper on Thursday responded to criticism of the U.S. decision to pull forces from the Syrian border with Turkey and abandon Kurdish partners who helped defeat and imprison the Islamic State group.

Turkish President Recep Tayyip Erdogan was determined to invade regardless of the U.S. presence on the border, and the U.S. troops in the area were in danger, Esper said.

“I am not about to start a fight with a NATO ally,” Esper said. If that happened, “we would be having a different discussion today about the future of the alliance.”

Meanwhile, Esper said he supported an idea forwarded by German Defense Minister Annegret Kramp-Karrenbauer to establish an international security zone in northern Syria, in cooperation with Russia. Allies are expected to discuss the matter during talks at NATO headquarters Thursday and Friday.

However, if such a plan materializes it would be a matter left to the Europeans to figure out, Esper said.

“I think it is fine and good for those countries that want to step up,” Esper said. “We don’t intend on contributing ground forces to that operation.”

Russia and Turkey struck an agreement on Syrian security earlier this week and it remains unclear if they would be interested in a broader European peacekeeping presence.