Embedded Marines teaching Afghans to fend for themselves 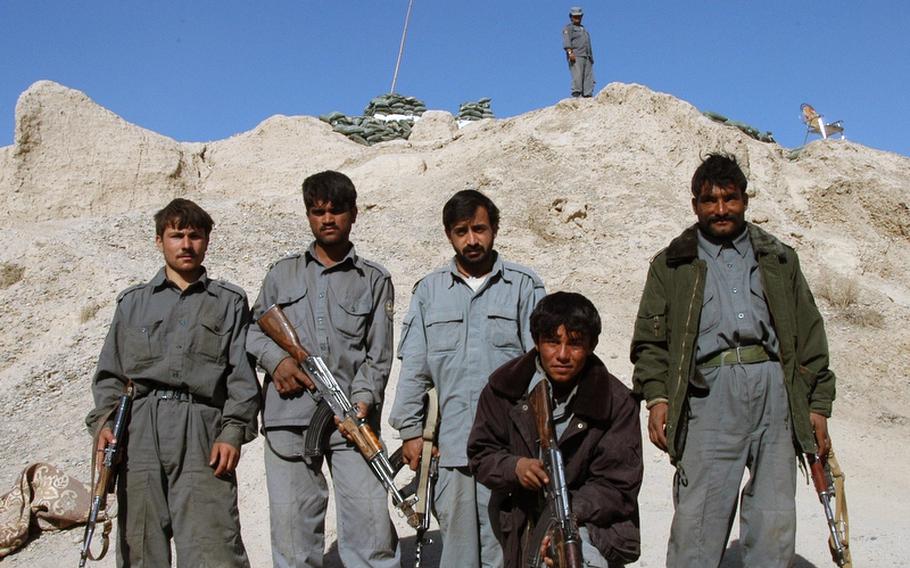 Buy Photo
Members of the Afghan National Police pose in front of an earthen mound used as an observation point at Checkpoint Kupak in Garmsir District, Afghanistan. Members of the 2nd Battalion 1st Marines police advisory team live alongside the ANP officers at the checkpoint as part of a multi-faceted approach to training up the local security forces so they are ready to take on the Taliban when coalition forces withdraw from their country. (Jon Rabiroff/Stars and Stripes)

Buy Photo
Members of the Afghan National Police pose in front of an earthen mound used as an observation point at Checkpoint Kupak in Garmsir District, Afghanistan. Members of the 2nd Battalion 1st Marines police advisory team live alongside the ANP officers at the checkpoint as part of a multi-faceted approach to training up the local security forces so they are ready to take on the Taliban when coalition forces withdraw from their country. (Jon Rabiroff/Stars and Stripes) 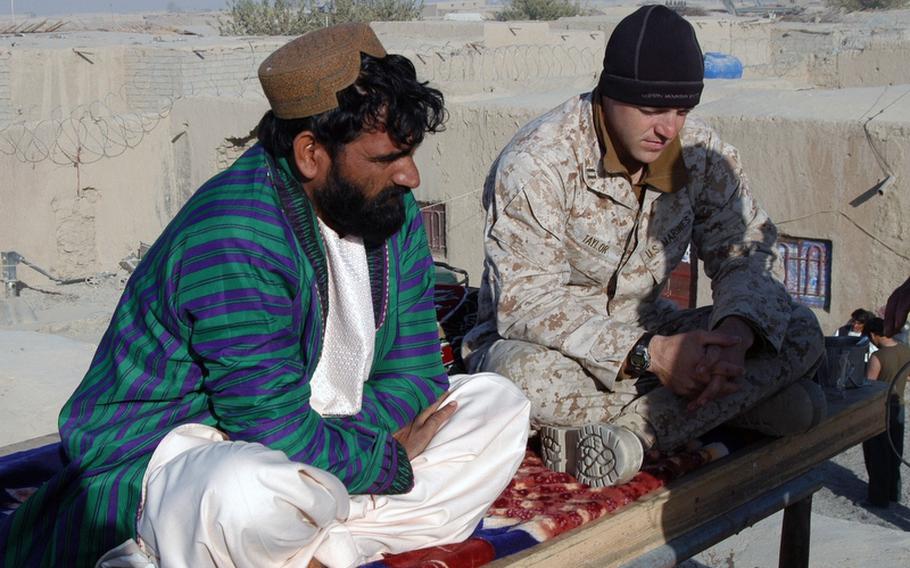 Buy Photo
Afghan National Police Garmsir District Chief Omar Jan, left, confers with Capt. Matthew Taylor, the officer in charge of the police advisory team in the Garmsir District of Afghanistan for the 2nd Battalion 1st Marines, on a roof overlooking adjacent compounds where the ANP and Marines live. Jan says his men need more training and education from the Marines before they will be able to handle the defense of their district on their own. (Jon Rabiroff/Stars and Stripes) 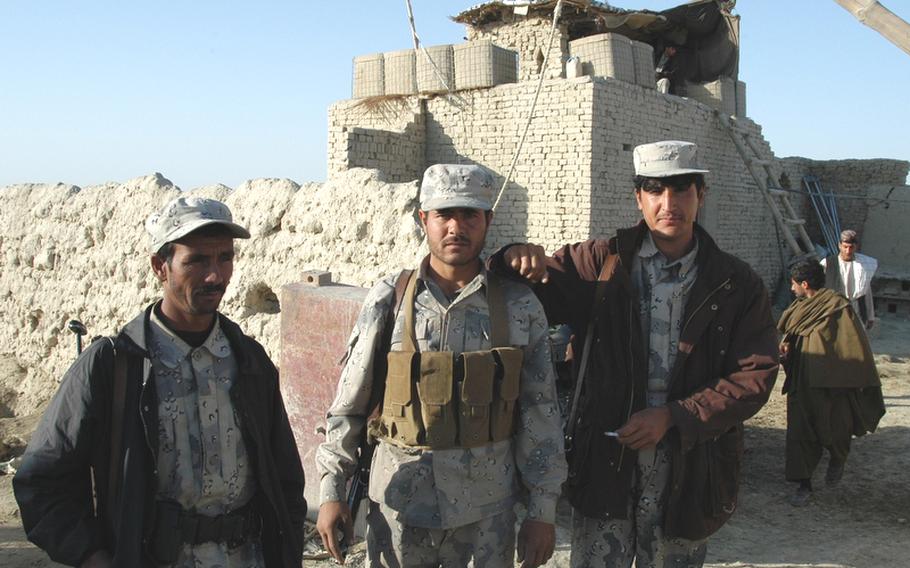 Buy Photo
Members of the Afghan Border Police pose in front of a roadside checkpoint near Spin Boldak in Kandahar province. U.S. Army units recently visited checkpoints throughout the area seeing what the ABP officers need to get through the upcoming winter, but did so on the condition that the local police keep better tabs on any clothes and other equipment that is handed out. (Jon Rabiroff/Stars and Stripes)

GARMSIR DISTRICT, Afghanistan -- Here, it seems, you can lead a force to water but you can&rsquo;t make it think.

When the U.S. Marines exposed an Afghan National Army weapons company to the wonders of bottled water &mdash; and how much better it tastes than the canal water they had been using &mdash; the ANA soldiers at Patrol Base Tuffan here asked their American counterparts to bring more.

&ldquo;I was like, &lsquo;No, you can bring it down yourselves,&rsquo;&thinsp;&rdquo; 1st Lt. Tyler Johnston of the 2nd Battalion 1st Marines Embedded Training Team for the ANA recalled telling the Afghans. &ldquo;&thinsp;&lsquo;You conduct a tactical convoy to (nearby Forward Operating Base) Delhi to pick up the water, or Delhi can push a convoy down to you to get it. You have a logistics officer, tell him what you need.&rsquo;&thinsp;&rdquo; He thought to himself, &ldquo;I&rsquo;m not your errand boy or your taxi that goes back and forth.&rdquo;

&ldquo;When they need something &hellip; I will try to push them to figure out how they can get it themselves,&rdquo; he said. &ldquo;They are absolutely great individuals, and all they need is a little bit of tough love to guide them in the right direction.&rdquo;

Tough love and other interpersonal skills are what U.S. military representatives in Helmand and Kandahar provinces are using to manage their complicated relationships with Afghanistan&rsquo;s security forces, including the ANA, the Afghan Border Police, the Afghan Highway Police, the Afghan National Police and the National Directorate of Security.

While most agree that the Afghan forces are undermanned, underequipped, undereducated and undertrained &mdash; not to mention allegations that some are prone to drug use, taking bribes and abusing their authority &mdash; U.S. Marines and soldiers generally defer to their Afghan counterparts, while occasionally giving them gentle verbal nudges toward the more advisable, and more American, way of doing things.

Think of it like a big brother letting his little brother lead the way to the store, but eventually asking, &ldquo;Do you think we might get their faster and safer if we were to cross the street here instead of at the busy intersection?&rdquo;

The idea, according to Marine Cpl. David Forrest of the 2-1&rsquo;s police advisory team, is to &ldquo;lead by example.&rdquo;

&ldquo;The Taliban has ruled for a long time, and we&rsquo;re trying to empower the police because once we leave, they&rsquo;re going to basically be in power,&rdquo; said Forrest, 23, from Kansas City, Kan., gesturing toward the ANP officers he was working with at Checkpoint Kupak in Garmsir district. &ldquo;We&rsquo;re here to set them up as best as possible to give the surrounding area some peace and justice.&rdquo;

Afghans, Johnston said, &ldquo;have played both sides of the fence for hundreds of years. That&rsquo;s how they&rsquo;ve survived. You have to give them some type of alternative. They know all the other empires that have come through here haven&rsquo;t [stayed] here forever, and they know we&rsquo;re not going to be here forever.

&ldquo;So what we&rsquo;re doing with the ANA &hellip; is provide them a stable force that is ready to take over this (area) when we leave,&rdquo; he said.

Tough love was also on display at a recent meeting of members of the Army&rsquo;s 4th Squadron, 2nd Stryker Cavalry Regiment&rsquo;s K and Headquarters troops with Sahib Jan, an Afghan Highway Police commander for the Robat area of Kandahar province.

The soldiers tried through pointed questions and polite urging to see whether Jan&rsquo;s men were equipped for the winter months. When the Americans said they would be bringing back coats, hats, gloves and socks for Jan&rsquo;s officers, they asked how the commander tracks supplies distributed to his men.

&ldquo;You know how Afghan soldiers are. They use it and abuse it,&rdquo; Jan said through an interpreter.

In response, the soldiers repeatedly stressed that when they returned with the winter clothes, they expected to see some sort of record-keeping system set up because the coats are designed to last two or three winters, and anyone getting a coat this year will not get one next year.

According to Afghan security force leaders in Kandahar and Helmand, the key to making their agencies self-sufficient and ready to take on the Taliban on their own is time &mdash; years rather than months &mdash; for them to get manpower levels up, and the training they need from U.S. and coalition forces.

&ldquo;Afghanistan for more than 30 years has been a war area, and that&rsquo;s why there are no facilities for education and for the police to get good training,&rdquo; Omar Jan, Afghan National Police chief for the Garmsir district, said through an interpreter.

Having tea on a roof overlooking the adjacent compounds that house his headquarters and a Marine police advisory team, he said, &ldquo;For the last eight years, we&rsquo;ve been trying to become more professional police, but they still need to be educated. There are a lot of police who don&rsquo;t know anything about education and they&rsquo;re illiterate.

&ldquo;The Marines need to train them and send them to school,&rdquo; he said.

Toward that end, the Afghan government and the Marines in Garmsir are putting in place a multifaceted approach to getting the local ANP force up to speed. That training will include eight weeks at a police academy in Lashkar Gah, one-week courses at the ANP&rsquo;s Garmsir District Headquarters and regular literacy classes.

In addition, Capt. Matthew Taylor &mdash; the 2-1&rsquo;s officer in charge of the Police Advisory Team for Garmsir &mdash; said, &ldquo;My Marines will be living at the [ANP] checkpoints, conducting day-to-day training and assessment.&rdquo;

Sgt. Joshua Phillips, a member of the 2-1&rsquo;s police advisory team, said that at ANP Checkpoint Kupak, &ldquo;The literacy rate is not very high. Getting them to get up to our standard of accountability is pretty hard because they don&rsquo;t have the written language that we use.

&ldquo;They can carry on a conversation like an adult, but when it comes to mathematics and things like that, it&rsquo;s slightly difficult,&rdquo; he said.

Taylor, 29, of San Clemente, Calif., said that, with training, &ldquo;Hopefully, in the next couple of months, we&rsquo;ll be able to craft a police force capable of a full spectrum of counterinsurgency operations and community-based policing.&rdquo;

In the case of the ANA, Marine Regimental Combat Team 1 commander Col. David Furness said: &ldquo;Sometimes they&rsquo;re too aggressive. They don&rsquo;t lack courage. You can&rsquo;t train courage. You&rsquo;ve either got it or you don&rsquo;t.

&ldquo;Are they perfect? No. Do they need more training? Yes,&rdquo; Furness said. &ldquo;We can&rsquo;t win this. [But] we can help them win this.&rdquo;

ANA 1st Lt. Abdul Agha, the 22-year-old executive officer for the Patrol Base Tuffan-based weapons company, said coalition forces and their governments back home just have to be patient.

&ldquo;If the coalition forces leave Afghanistan &hellip; it would be a big problem,&rdquo; he said through an interpreter. &ldquo;This time, we would have more casualties, more everything than we had during the Taliban because we have a bigger enemy &mdash; it is Pakistan. All the time, it is interfering in our politics and in our country.

&ldquo;I cannot tell you the exact time we will be able to control all of the security all around Afghanistan,&rdquo; he said. &ldquo;The Afghan National Army is just eight years old. We are looking for our ability.&rdquo;

Mir Hanza, the Garmsir district director of the National Directorate of Security &mdash; an Afghan hybrid version of the CIA and FBI &mdash; said through an interpreter: &ldquo;The ANA, the ANP, the NDS &mdash; they still need the coalition forced to help them for more time. They need military training, education. They need some other resources, like tanks and different kinds of weapons. They need to be complete, with all kinds of logistical things.&rdquo;

Then, he said, &ldquo;It will be easy for us to take over all of Afghanistan, and the coalition forces can go back home.&rdquo;