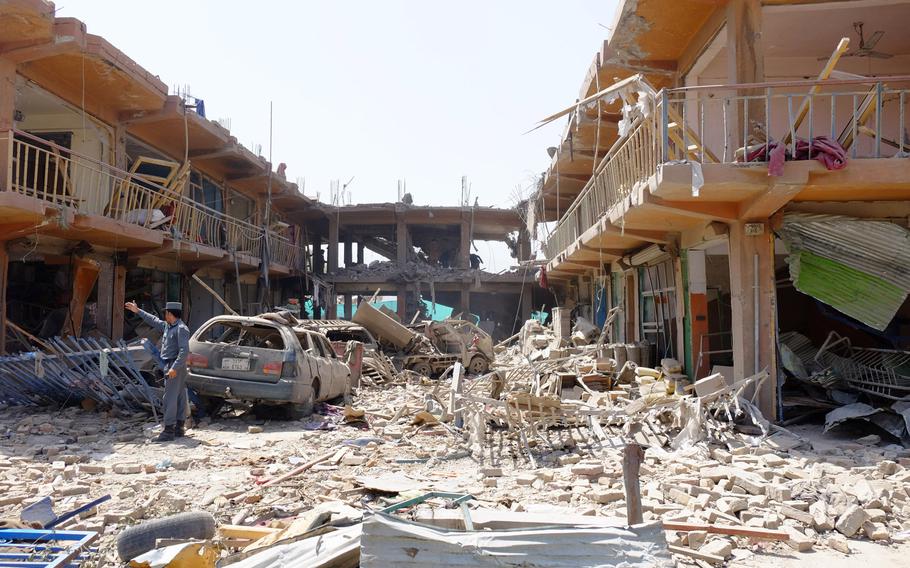 Buildings and cars sit mangled near the site of a large truck bomb that exploded in Kabul on Aug. 7, 2015. The blast left a wide swath of destruction and killed or wounded more than 100 people. (Josh Smith/Stars and Stripes)

Buildings and cars sit mangled near the site of a large truck bomb that exploded in Kabul on Aug. 7, 2015. The blast left a wide swath of destruction and killed or wounded more than 100 people. (Josh Smith/Stars and Stripes) 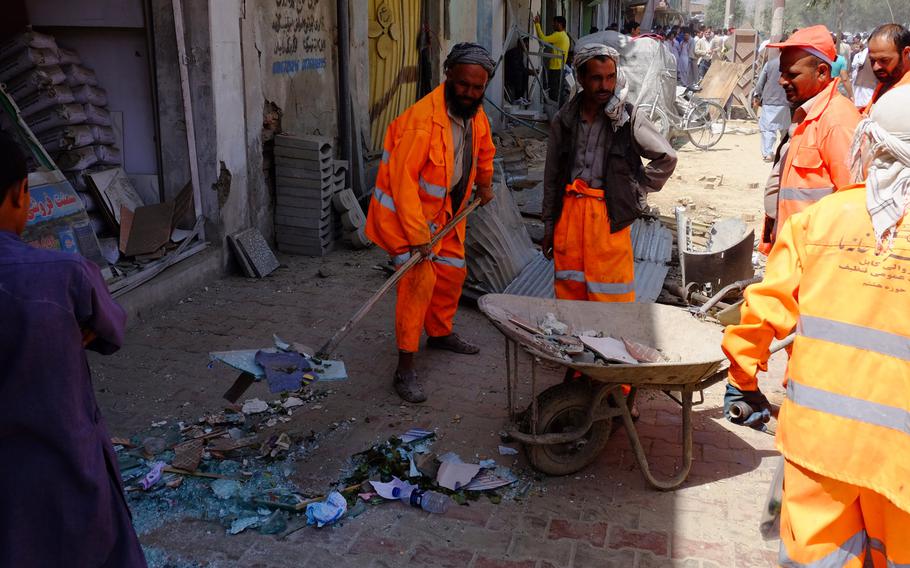 City workers clean up debris near the site of a large truck bomb that detonated early on Aug. 7, 2015 in Kabul. The explosion shattered windows and twisted metal for blocks. (Josh Smith/Stars and Stripes)

On Friday evening, a man said to have been in a police uniform blew himself up amid a crowd of recruits outside a police academy in the city. As many as 26 cadets were killed and another 25 were wounded, according to an official at the academy.

As Friday is the traditional Muslim holy day, the young cadets were returning to their barracks after a day of leave, said the official who asked not to be named.

Also on Friday evening, explosions were heard near the Kabul airport. In one incident around 10:15 p.m., two attackers were killed as they tried to assault the international military base near the airport, according to a spokesman for the NATO-led coalition, Col. Brian Tribus.

In another incident, a single suicide car bomb struck a building used by a counternarcotics police unit, according to a police official in the area, who spoke on condition of anonymity, told Stars and Stripes.

Although gunfire was heard after the blast, the official said no other attackers appeared to have been involved. He did not have information on any casualties.

Earlier in the day a massive truck bomb detonated near a Ministry of Defense compound, killing at least 11 people and wounding more than 200, nearly all of them civilians.

The attacks come amid uncertainty over the future of nascent peace talks, which had tentatively begun in Pakistan until they were put on hold last month after it was revealed that the Taliban’s reclusive leader, Mullah Omar, had been dead to for several years.

Afghan President Ashraf Ghani, who has staked political capital on a push to strike a deal with insurgent groups, decried the high number of civilian casualties and vowed a strong response.

"We are still committed to peace,” he said in a statement. “But we will respond to these sort of terrorist attacks with force and power.”

The Taliban claimed responsibility for the attack on the police academy, but did not immediately attach their name to the first attack, which occurred in the Shah Shaheed neighborhood about 1 a.m.

There were no casualties among ministry staff, and no damage to the compound, which is protected by large, concrete blast walls, said Dawlat Waziri, the ministry’s deputy spokesman.

The shops and houses on the street opposite were not as well protected. The explosion caused the collapse of many mud-brick buildings, shattered windows and twisted metal blocks away. It left cars burning and shops and homes damaged along the street.

“It was very huge blast, and we all woke up to the explosion,” said Hafizullah 27, a resident at the scene who, like many Afghans, uses only one name. “The power went off, but it was still light from the flame from the explosion.”

Taliban insurgents have mounted repeated attacks against military and government targets in Kabul in recent months. But the power of the morning explosion was rare for the capital because of a ban on large trucks entering the city during most of the day. Trucks are allowed to enter only from 9 p.m to 5 a.m.

“It is mostly a residential area and many civilian homes are damaged by the blast,” Rahmani said.

The U.S. Embassy in Kabul released a statement condemning the morning bombing.

“This attack in a heavily populated area shows a complete disregard for human life,” the embassy said. “Our thoughts and prayers are with the victims and their families at this time.”

Attacks have taken an increasingly heavy toll on civilians, with noncombatant casualties hitting a record high in the first six months of this year, according to the United Nations.

In its latest report, the U.N. said its investigators confirmed 1,592 deaths and 3,329 injuries, for a total of 4,921 civilian casualties.