Doctors Without Borders pulls out of Kunduz after airstrike 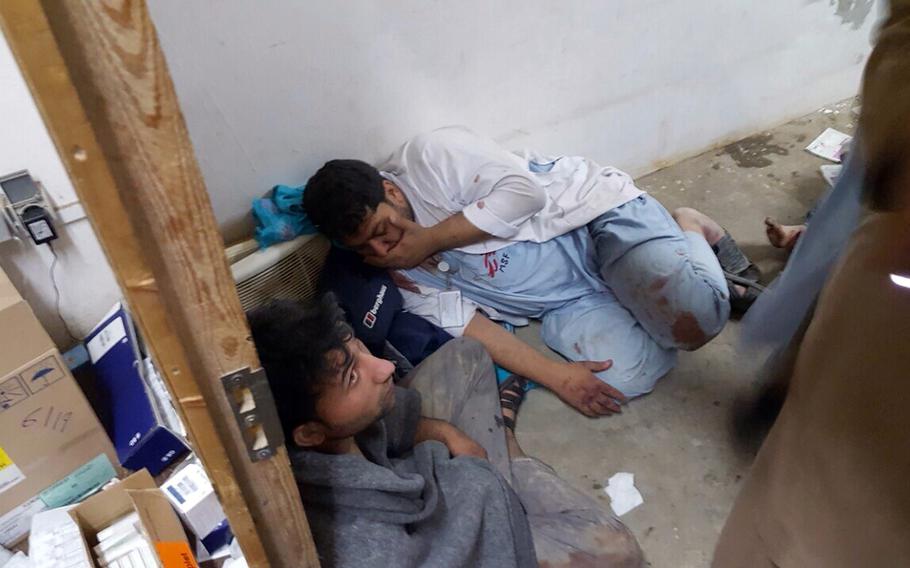 KABUL, Afghanistan — Doctors without Borders on Sunday demanded an impartial, international investigation into a suspected American airstrike on its hospital in Kunduz that killed 22 people, rejecting NATO and U.S. military investigations as "insufficient."

The international aid organization, which goes by its French initials, MSF, also announced it was closing down the hospital, which was heavily damaged in what MSF officials said was a prolonged aerial bombardment early Saturday. The hospital had treated hundreds of patients since the Taliban seized Kunduz city in a lightening offensive on Monday. Casualties mounted as government forces, aided by U.S. special forces advisers and airstrikes, launched a counteroffensive to retake the city.

Both the NATO-led coalition in Afghanistan and the U.S. military have launched investigations into the attack on the MSF trauma center. The U.S. military has acknowledged it conducted an air strike against insurgents who were firing on U.S. troops "in the vicinity" of the hospital, which housed more than 100 patients and about 80 medical staff at the time it was hit.

A U.S. military official said the aircraft involved was an AC-130, a four-engine turboprop favored by special operations forces.

Secretary of Defense Ash Carter on Sunday promised a full and transparent investigation and said he would hold personnel accountable if the investigation warrants that.

The acting governor of Kunduz province, Hamdullah Danishi, told The Washington Post that the Taliban were using the MSF hospital grounds as a base from which they had been firing rocket-propelled grenades for days. But MSF denied that there were any insurgents in the hospital compound beyond those seeking treatment or that there had been any fighting in the hospital.

MSF, which on Saturday said indications were that the coalition was responsible for the attack on the hospital, said an impartial probe was needed.

"Under the clear presumption that a war crime has been committed, MSF demands that a full and transparent investigation into the event be conducted by an independent international body," MSF General Director Christopher Stokes said in a statement. "Relying only on an internal investigation by a party to the conflict would be wholly insufficient."

"The secretary-general recalls that hospitals and medical personnel are explicitly protected under international humanitarian law," a statement from his spokesman said.

The death toll from the attack rose Sunday to 22, 10 patients, including three children, and 12 staff. More than 30 others were injured. Both Afghan and American forces were operating in the area at the time.

The hospital is "not functional anymore," said Kate Stegeman, spokeswoman for MSF in Kabul, in explaining the decision to close the only MSF hospital in northern Afghanistan. Some staff have remained, however, to help out at other hospitals, she said.

President Barack Obama expressed condolences to the victims on Saturday, but stopped short of a full apology, citing the military investigation.

"On behalf of the American people, I extend my deepest condolences to the medical professionals and other civilians killed and injured in the tragic incident at a Doctors Without Borders hospital in Kunduz," the president said in a statement.

"The Department of Defense has launched a full investigation, and we will await the results of that inquiry before making a definitive judgment as to the circumstances of this tragedy."

Civilian casualties and "friendly fire" incidents caused by airstrikes and other military operations have been a source of significant tension between Afghans and the American military presence. Former President Hamid Karzai was a staunch public critic of American airstrikes and special operations missions and imposed limitations on how airstrikes could be conducted. But current President Ashraf Ghani, faced with the pullout of U.S. troops and a potential reduction in aid, has been more muted, merely urging the coalition to avoid civilian casualties.

He and the head of U.S. and coalition forces in Afghanistan, Gen. John F. Cambell, met Saturday and agreed to work together in examining the hospital attack.

Since pushing back into Kunduz early on Thursday, Afghan troops have fought house-to-house to try to clear Taliban from the city, sometimes with the help of American special forces soldiers and airstrikes.

The mopping-up operation was continuing Sunday, police said, with pockets of resistance remaining on the outskirts of town.

An airstrike as defined by the military may include multiple aircraft attacking one target, and may use different types of weapons at the same time, including bombs, missiles, or guns.

MSF officials said there were no insurgents inside the hospital besides those who may have come to be treated. The compound gate was closed all night, officials said.

"Not a single member of our staff reported any fighting inside the MSF hospital compound prior to the U.S. airstrike on Saturday morning," Stokes said. "The hospital was full of MSF staff, patients and their caretakers."

Obama said he expects "full accounting of the facts and circumstances" and pledged to stay apprised of the probe’s findings.

Staff described scenes of horror as the hospital was repeatedly struck over the course of about an hour, then burned as patients too injured to move died inside.

Lajos Zoltan Jecs, a nurse who was sleeping in the facility’s safe room when the attack occurred, said as the dust settled, staff and patients emerged, wounded. "In the Intensive Care Unit, six patients were burning in their beds," he said in an account released by Doctors Without Borders.

Even as they recovered from their own shock, and in some cases injuries, the staff immediately tried to administer first aid to the survivors in makeshift operating rooms.

"We did an urgent surgery for one of our doctors. Unfortunately he died there on the office table," Jecs said. "We saw our colleagues dying. Our pharmacist … I was just talking to him last night and planning the stocks, and then he died there in our office."