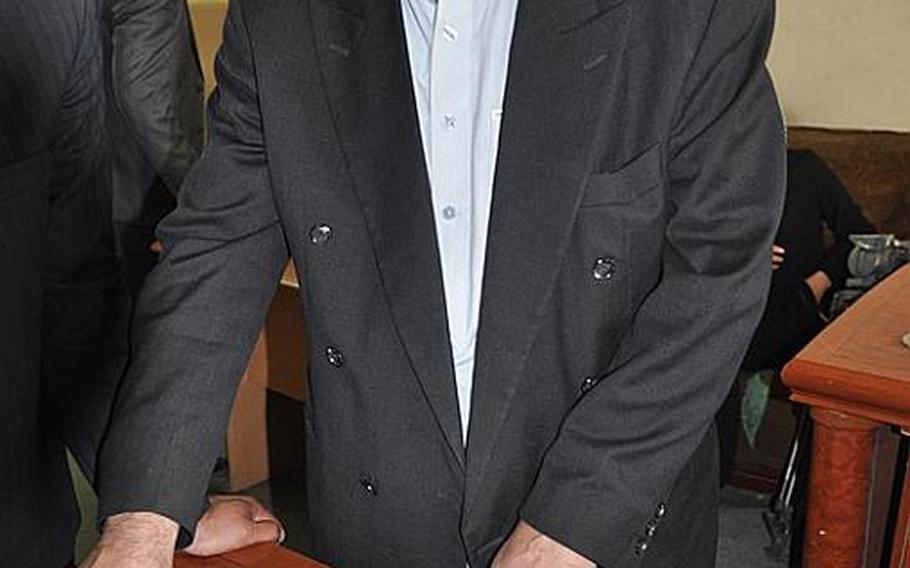 Haji Abdul Rahman Shafeq, a losing candidate from Baghlan Province, points to descrepancies between preliminary and final vote tallies as he waits to submit a complaint to the attorney general in Kabul on Nov. 27. (Dianna Cahn/Stars and Stripes)

Haji Abdul Rahman Shafeq, a losing candidate from Baghlan Province, points to descrepancies between preliminary and final vote tallies as he waits to submit a complaint to the attorney general in Kabul on Nov. 27. (Dianna Cahn/Stars and Stripes) 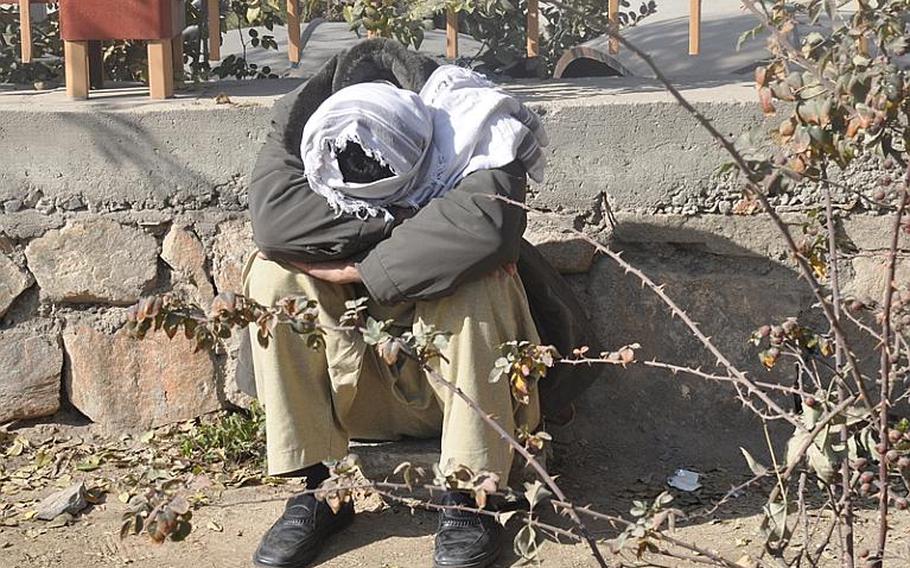 An Afghan man sits forlornly in Zar Nagar Park in Kabul on Nov. 28 where losing candidates of fraud-tainted parliamentary elections gathered for a protest. (Dianna Cahn/Stars and Stripes) 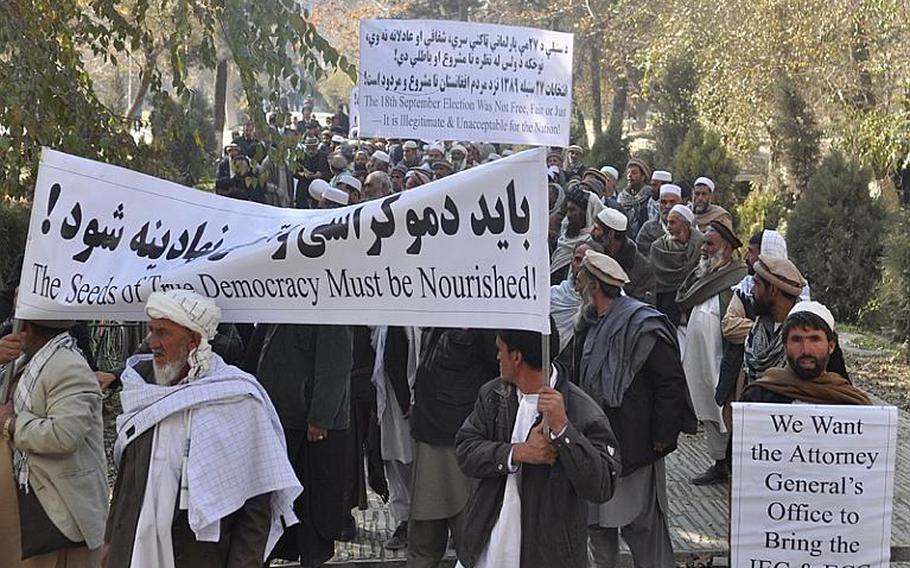 Afghan parliamentary candidates march in Kabul on Nov. 28 to protest the questionable outcome of the fraud-riddled Sept. 18 elections. (Dianna Cahn/Stars and Stripes) 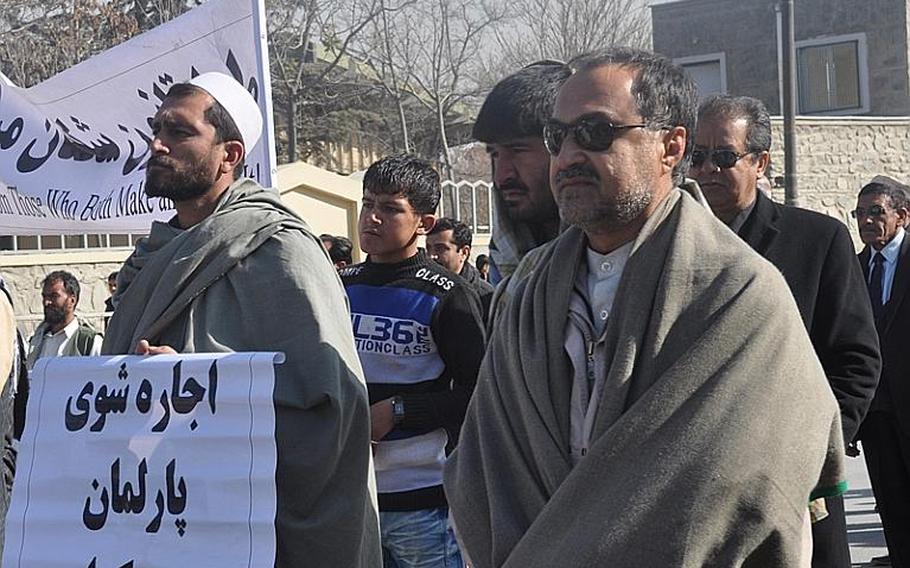 Parliamentary incumbent candidate and protest organizer Daoud Sultazanoi (right), marches along with fellow demonstrators in Kabul on Nov. 28 against fraud-riddled elections that led to their losses. (Dianna Cahn/Stars and Stripes) 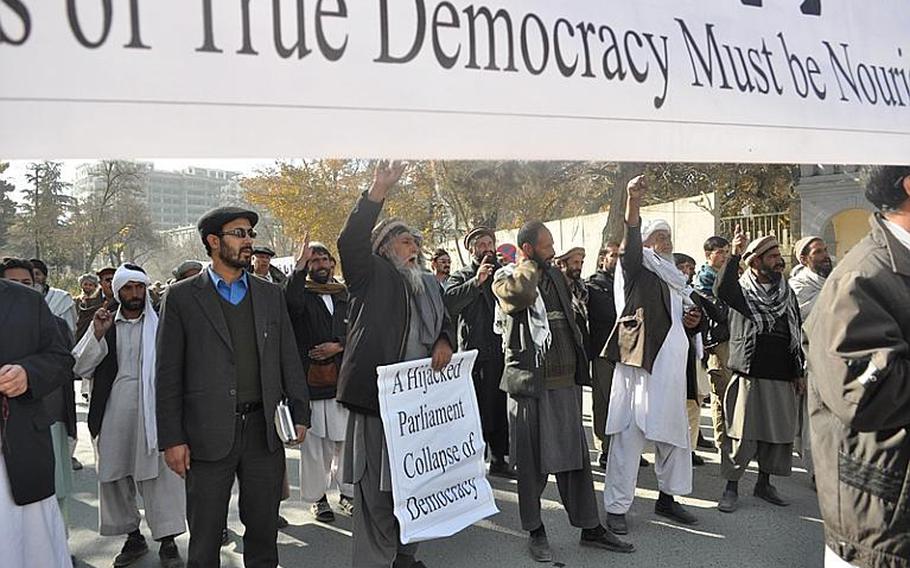 Afghan parliamentary candidates march in Kabul on Nov. 28 to protest the questionable outcome of the fraud-riddled Sept. 18 elections. (Dianna Cahn/Stars and Stripes)

KABUL &mdash; When the United States and the United Nations praised the recent conclusion of the Afghan parliamentary elections as a step forward for representative government, it stoked fresh cynicism among many Afghans who once believed democracy was possible.

Mired in conspiracy, riddled by fraud, the prolonged September vote concluded last week when the elections oversight commission released the last of the final tallies.

But the chaotic story is not over.

Allegations of bribery, intimidation and manipulated votes are widespread, while the electoral and government bodies addressing these concerns are blaming each other. There is suspicion of broad criminal activity, and deep distrust of the very measures taken to rectify those problems.

Still, the commissions tasked with administering the elections were far more assertive than during last year&rsquo;s tainted presidential election, leading the western powers to praise Afghanistan&rsquo;s electoral progress despite its well-documented irregularities.

For many Afghans, though, the tarnished results outweighed any perceived gains. They were left questioning not only their corrupt leadership, but also the dubious interests of the international powers who&rsquo;ve waged war here for the past nine years declaring that governance, justice and rule of law were the means to bring peace.

&ldquo;It&rsquo;s almost patronizing,&rdquo; said Daoud Sultanzoi, a prominent member of parliament from Ghazni who lost his seat and helps organize street protests by losing candidates. &ldquo;They came in and endorsed a process that is colossally bad. &hellip; We cannot make this problem go away simply by looking in the other direction or saying this is the best we can have.&rdquo;

The newly named 249-seat parliament is seen as a platform for the wealthy and those tied to old warlords.

Pashtuns, who make up the country&rsquo;s largest ethnicity, are severely under-represented in areas where the insurgency is heaviest, particularly Ghazni province. The outcome favors smaller factions and deepens ethnic and tribal divides &mdash; a serious concern for President Hamid Karzai, who relies on a Pashtun constituency and worries this slight could turn more Pashtuns toward insurgency.

So tainted was the Sept. 18 vote that the attorney general opened criminal investigations and warned that the Independent Election Commission release of final tallies &mdash; coming before his investigations were complete &mdash; was potentially catastrophic.

In Afghanistan, there is no single arbiter of truth.

Instead, the chairman of the IEC and other observers questioned whether Attorney Gen. Mohammad Ishaq Alako, a presidential appointee, was acting on behalf of Karzai. The president&rsquo;s aides were among those warning that certification of the Ghazni outcome could strengthen the Taliban &mdash; and that this was yet another effort to manipulate the ballot.

The confusion has left people bitter both toward the process and toward an international community that they believe refuses to recognize the crisis.

Even in Kabul, where the insurgency is barely felt and business is bustling, ordinary Afghans look forward with despair.

&ldquo;Neither our government nor the international community care about democracy here,&rdquo; said Sabaoun Sherzai, 18, who worries about his future once he graduates high school this year. &ldquo;For the common people, I don&rsquo;t know who they can trust.&rdquo;

For the international community, it was a choice between the lesser of two evils. What&rsquo;s better, one western official pondered, flawed elections, or none at all?

By all accounts, the elections were marred by fraud.

The IEC and its sister organization &mdash; the Electoral Complaints Commission, which investigates complaints &mdash; took actions seen as positive in addressing reports of ballot stuffing, blatant bribery and the handover of voter cards to the highest bidders or the most intimidating operatives.

The disqualification of 1.3 million votes was hailed as a bold step that established independence of the electoral groups, which &ldquo;did a pretty remarkable job under very difficult circumstances and under enormous pressure,&rdquo; according to a western official who spoke on condition of anonymity.

Ultimately, though, there was no transparency in the process. No one was able to verify the accuracy of final tallies. Election observers urged widespread electoral reform.

There were no requirements established for candidates, not even basic literacy, said Jandad Spin Ghar, executive director of the Free and Fair Elections Foundation of Afghanistan, the largest electoral watchdog agency in the country.

The same lack of standards marred the Karzai-appointed commissions, There were no requirements to vet commissioners for professionalism or impartiality, Spin Ghar said. Many had no knowledge of election law, and some had close ties to candidates or government officials, he said.

Other complaints went unheeded by the commissions, and Alako, the attorney general, stepped in. Despite IEC objections, he launched investigations into 413 candidates, among them 59 declared winners. He apprehended 16 people &mdash; including this week&rsquo;s detention of four IEC workers &mdash; and made 12 arrests of money changers and agents looking to sell seats. His office planned to charge two officials each from the IEC and ECC, said Deputy Attorney General Rahmatullah Nazari.

The move was highly controversial. The IEC and some western diplomats said Alako had overstepped.

The top United Nations diplomat in Afghanistan, Staffan de Mistura, issued a statement last month saying these investigations were &ldquo;the exclusive authority of the two Afghan electoral institutions&rdquo; and should be done &ldquo;without interference from any state organ or foreign interest.&rdquo;

Ruttig and other observers warned that the IEC and ECC had lost control of the process, even as they questioned the objectivity of the attorney general&rsquo;s office.

Suspicions lingered that Alako was sent by Karzai to delay results until a solution could be worked out in Ghazni, where the ethnic-vote balance was so out of whack that not a single person from the Pashtun majority won a seat.

On Nov. 24, the IEC released its final tally of all but Ghazni province. Chairman Fazal Ahmad Manawi said the Ghazni delay was due to &ldquo;technical reasons,&rdquo; though The Associated Press reported an official saying that a re-vote was being considered.

&ldquo;We were assigned to perform a duty and we think we have done everything in accordance with international standards, in complete honesty,&rdquo; Manawi said.

The U.S. and the U.N. immediately welcomed the certifications with praise.

&ldquo;There were irregularities and fraud in this election, but ... (the commissions) have worked well to advance a credible process,&rdquo; said a U.S. Embassy statement.

On a chilly morning after the results were released, protesters gathered with their signs and their frustrations at Zar Nagar Park in central Kabul.

Protests are quite frequent now, a hundred or so people carrying banners bearing messages like &ldquo;A Hijacked Parliament, Collapse of Democracy.&rdquo;

&ldquo;There is no democracy in Afghanistan right now,&rdquo; said Baz Mohammad Zazai, a 24-year-old student of law and political science who listened to the protesters. &ldquo;The elections were not fair and the international community knows they were not fair.&rdquo;

For many, faith that this can be rectified is waning.

&ldquo;&ldquo;There is no justice in our country, and the Taliban is getting stronger every day.&rdquo;

The inauguration of the new parliament is slated for Jan. 20, but could be delayed. De Mistura called it a major step in the country&rsquo;s path to better governance and improved delivery of services to the Afghan people.

But Sultanzoi looked around Zar Nagar park this week and pointed out forlorn Afghans who furnish its dusty lawns. A man sat on the ground, his head resting on folded knees.

&ldquo;People are sitting hopelessly,&rdquo; Sultanzoi said. &ldquo;That guy has no job. He&rsquo;s probably thinking how is he going to feed his family? Whether you talk democracy or not, we need to provide services, hope, security to millions.

&ldquo;We have to start from scratch,&rdquo; he said. &ldquo;The U.S. and Europe, nobody wants to admit that they made colossal mistakes from the beginning.&rdquo;