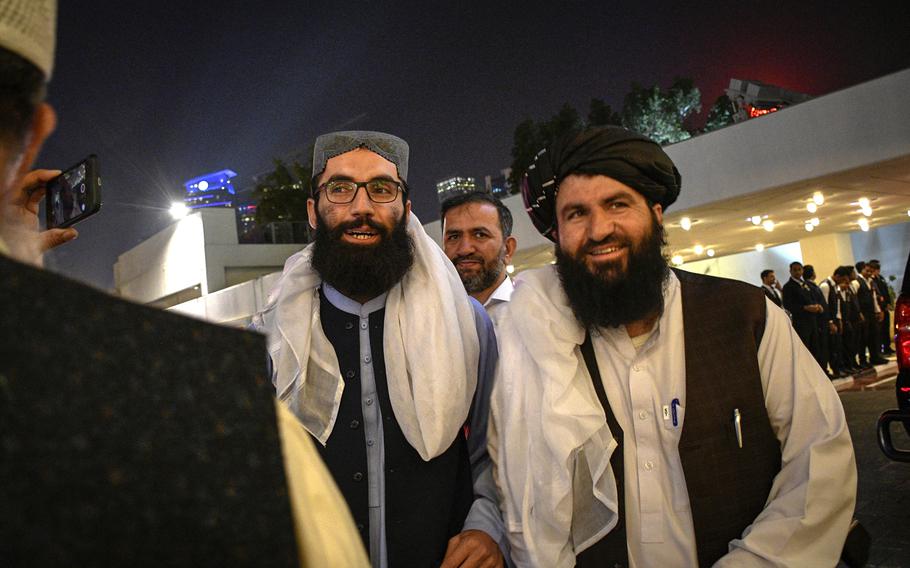 High-ranking Taliban official Anas Haqqani, left, and a press aide for the group meet with reporters on the eve of a historic agreement between the militant group and the United States in Doha, Qatar, Feb. 28, 2020. (J.P. Lawrence/Stars and Stripes)

High-ranking Taliban official Anas Haqqani, left, and a press aide for the group meet with reporters on the eve of a historic agreement between the militant group and the United States in Doha, Qatar, Feb. 28, 2020. (J.P. Lawrence/Stars and Stripes) A boy plays on an abandoned Soviet tank on a side of a highway east from Kabul, Afghanistan, on Feb. 22, 2020, the first day of a declared period of reduced violence in the country. Afghanistan in the month afterward saw a surge in violence. (J.P. Lawrence / Stars and Stripes)

KABUL, Afghanistan – The drawdown of U.S. troops from Afghanistan has encouraged the Taliban’s belief that they are closer than ever to victory, analysts and fighters said, one year after a deal was signed with the militant group meant to bring peace to the country.

On Feb. 29, U.S. and Taliban representatives gathered in Doha, Qatar, to sign an agreement that would allow for the withdrawal of American troops in exchange for concessions by the militants.

The concessions included opening peace talks with the government in Kabul and preventing extremist groups like al-Qaida from using the country to launch attacks on America and its allies.

But a year later, a peaceful end to the bloodshed remains elusive, with the increasingly emboldened Taliban escalating their attacks on government forces, still maintaining ties with al-Qaida, and remaining unlikely to compromise in negotiations, a recent report to Congress said.

“The Taliban’s military momentum and the continued drawdown of U.S. troops have reinforced the Taliban’s narrative of its political and military ascendancy,” the report by the Lead Inspector General for Operation Freedom’s Sentinel said.

President Joe Biden’s administration is reviewing the deal with the Taliban, with some U.S. policymakers calling for a renegotiation of the agreement ahead of a May 1 deadline to pull all troops from the country. Some 2,500 U.S. troops remain in Afghanistan at about a dozen bases, alongside 9,600 NATO troops and around 18,000 civilian contractors.

Taliban fighters told Stars and Stripes they are on the verge of taking over the country and believe the deal is proof that they defeated U.S. and NATO forces, in the same manner that earlier militants defeated the Soviet Union.

Fighter Nasrullah, a 25-year-old former shepherd from Nangarhar province, recalled during a phone interview the day he asked his commander about the deal after hearing about it on the radio.

His commander said the peace deal meant they need to keep fighting because “when U.S. leaves, the government will not survive, so we all should be ready,” said Nasrullah, who insisted on using a pseudonym out of concern for his safety.

The efforts by the Trump administration to end the war in Afghanistan included two concessions the Taliban had long demanded and the U.S. had resisted, said Elizabeth Threlkeld, deputy director for South Asia at the Stimson Center, a Washington think tank. The U.S. committed to leaving Afghanistan and held direct talks with the Taliban in a process that shut out the recognized Kabul government, Threlkeld said.

Both steps helped Taliban leaders celebrate the deal “as a victory won on the battlefield ahead of a Soviet-style withdrawal, building a sense of momentum among their fighters over the past year,” Threlkeld said.

Even on the day of the signing, there were fears that the Taliban would view the peace deal as a victory and not a compromise.

“I know there will be a temptation to declare victory,” then-Secretary of State Mike Pompeo said to the Taliban. “But victory for Afghans will only be achieved when they can live in peace and prosper.”

Instead of peace, Taliban offensives swept the country, overrunning checkpoints and surrounding key cities like Kandahar and Lashkar Gah.

Attacks last summer and fall were 18% higher than the same period the year before the deal, the United Nations said.

While no U.S. troops have died in combat since the signing of the deal last February, Afghan forces lost nearly 10,000 soldiers and police in dozens of Taliban attacks last year, officials said. More than 3,000 civilians also died amid a surge in assassinations against government officials and religious leaders, the U.N. said.

“I had to lie to my soldiers, that we had air support and ammunition, to keep them fighting,” Sulaimankhail said.

The continuing bloodshed has undermined public support in Afghanistan for the long-delayed peace talks between the Kabul government and the Taliban, the Freedom’s Sentinel report said.

While the U.S. insisted the Taliban speak to Kabul as part of the deal, the militant group doesn’t believe there is “any obligation to make substantive concessions or compromises,” the report said. The negotiations are unlikely to result in any extended cease-fire this year.

Those calling for an extension of the May 1 troop withdrawal deadline argue that a few more months would buy time for the peace talks, dull the Taliban’s belief that they will win through violence, and hold them accountable for promises made in their deal with Washington.

“It is important that the Taliban be held responsible for some of the things they’re doing,” said Fawzia Koofi, one of the few women representing Kabul in the negotiations.

Among others calling the May 1 deadline premature is Sen. Jack Reed, an Army veteran and chairman of the Senate Armed Services Committee.

“To pull out within several months now is a very challenging and destabilizing effort,” Reed told reporters Wednesday. His comments follow a call by the congressionally appointed Afghan Study Group to extend or abandon the May 1 deadline.

Those against extending the troop withdrawal deadline say putting U.S. troops in danger again will not increase the chances of a peaceful end to the war in Afghanistan.

“The violence, corruption, cronyism, distrust, and regional spoilers that plague Afghan negotiations today is outside Washington’s control and will still exist in fall,” said Adam Weinstein, a research fellow at the Washington D.C.-based Quincy Institute for Responsible Statecraft.

The Taliban have threatened to again attack American forces if Biden opts to extend the U.S. military mission in Afghanistan.

“If they refuse to leave Afghanistan, we will start attacking them everywhere,” said Mawlawi Ghulam Rasool, a Taliban commander in Kandahar province. “We cannot say what will happen, but we feel that we defeated the U.S. and are winners,” he said.