Corolla's the car of choice in Kabul 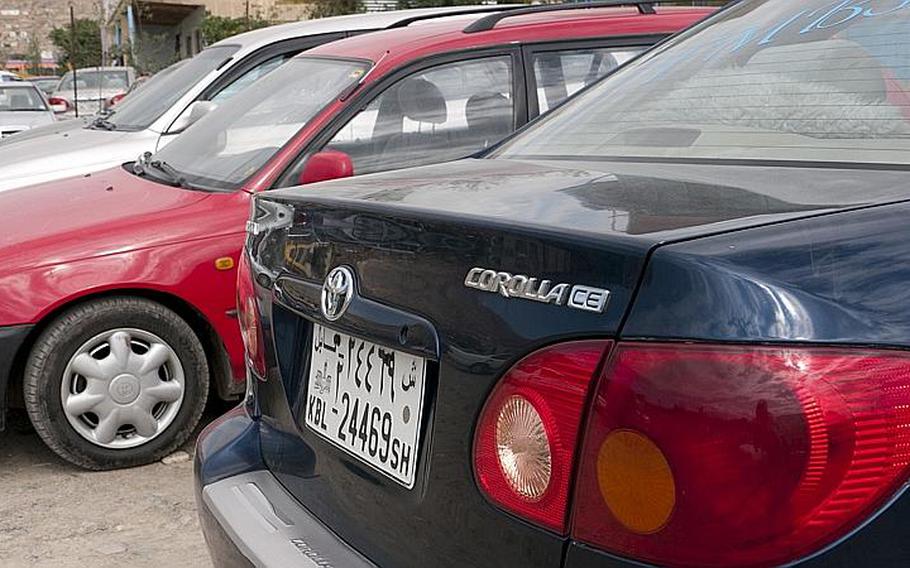 Toyota Corollas line a lot at a car dealership in Kabul. The Afghan capital has seen a boom in car ownership in recent years and the Corolla has remained king, accounting for the vast majority of passenger car sales. (Michael Gisick/Stars and Stripes)

Toyota Corollas line a lot at a car dealership in Kabul. The Afghan capital has seen a boom in car ownership in recent years and the Corolla has remained king, accounting for the vast majority of passenger car sales. (Michael Gisick/Stars and Stripes) 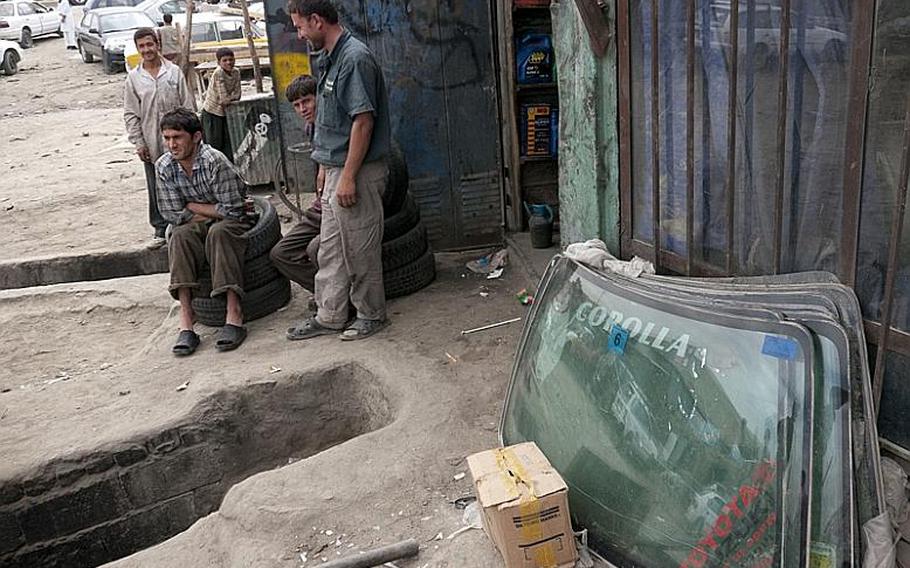 The Toyota Corolla is so ubiquitous in Kabul that most mechanics work only on them. Other cars are available, dealers say, but good luck getting parts. (Michael Gisick/Stars and Stripes)

KABUL &mdash; Taxi drivers prefer 20-year-old yellow Corollas with the steering wheel on the right side, British style. Families opt for a practical Corolla in a neutral color from the late &rsquo;90s. Young men with good jobs might go for a flashier new Corolla with a spoiler and a sporting decal across the back window saying &ldquo;Special Drag and Street Fighter&rdquo;or maybe just &ldquo;Corolla.&rdquo;

As urban Afghans take to the wheel in growing numbers, they find a wide variety of choices at the dealership &mdash; between different kinds of Toyota Corollas. So ubiquitous is this stalwart of Japanese motoring that perhaps in a bid to add some variety to their automotive universe, Afghans call the Corolla by several names.

&ldquo;Nobody is asking for anything else,&rdquo; said Al-Haj Najeeb Ullah, the head of a union representing 110 auto dealerships in Kabul. He estimates that 90 percent of passenger cars sold in Kabul are Corollas.

&ldquo;It&rsquo;s a good car,&rdquo; he said. &ldquo;Also, only the international forces and very rich people can afford anything other than a Corolla.&rdquo;

Of course, the Toyota Corolla is hardly the world&rsquo;s only economical compact sedan. So what of the Honda Civic or the Volkswagen Golf, to say nothing of the Ford Escort?

About 40 years ago, Ullah said, cars made in America and Europe were popular in Kabul. But decades of war and the Iranian revolution deepened Afghanistan&rsquo;s geographic isolation, and the Opels and Chevrolets disappeared.

Corollas &mdash; and just as importantly, the spare parts to keep them running &mdash; kept arriving through it all. Reliable and good on gas, the car proved popular and gained such a hold on the market that Corolla parts were all that many mechanics stocked.

During the chaotic years of the early &rsquo;90s, when the country was immersed in a civil war, Corollas bound for Pakistan were often smuggled through Afghanistan to avoid customs. Some stayed behind, explaining the British-oriented taxis; Pakistan, a former British colony, follows British driving patterns. (At least in theory, drivers in Afghanistan hew to the right side of the road, and most cars conform to the international standard.)

Since the U.S. invasion, auto ownership &mdash; which is to say Corolla ownership &mdash; has grown exponentially. From 77 dealerships in 2003, Ullah counts more than 550 now in Kabul alone. Older models can be had for as little as $3,000.

A used Corolla from the early &rsquo;90s typically goes for about $3,000 or $4,000, Ullah said. Dealerships rarely stock new models because of the lack of a formal distribution system in Afghanistan. Instead, dealers use agents in Europe and North America to buy used Corollas and ship them to Afghanistan via Dubai and Iran or Pakistan.

As the U.S. military has learned to its discomfort, all that shipping can drive up costs. A used Corolla purchased for $8,000 in the U.S. might sell for $20,000 in Kabul, according to Mohammed Nabi, a car dealer. He said it costs about $7,000 to ship a car from the U.S.

Still, Nabi said, American Corollas are considered the best and most reliable version.

&ldquo;Most of the Canadian Corollas had an accident,&rdquo; he said.

Given the uncertain provenance of the cars arriving in Afghanistan &mdash; and the lack of Carfax reports &mdash; Corollas that do prove reliable once they&rsquo;re in the country often appreciate in resale value. There are few options other than Corollas. Luxury brands like Mercedes and Lexus are available in small numbers, but come with price tags well above a Corolla.

&ldquo;You can buy a very nice Mercedes, but if you have any problem with it, it&rsquo;s going to take you about two months to get any parts and maybe then the mechanic won&rsquo;t know what he&rsquo;s doing, unlike a Corolla,&rdquo; said another car dealer, Khalid Aref.

And after all, it&rsquo;s not like Afghans have given their loyalty to some sort of lemon like a Yugo or a Ford Festiva. The Corolla is the most popular car of all time, with more than 30 million sold worldwide since the model was launched in 1966, according to Toyota.

Ullah said he hasn&rsquo;t heard anything about that.