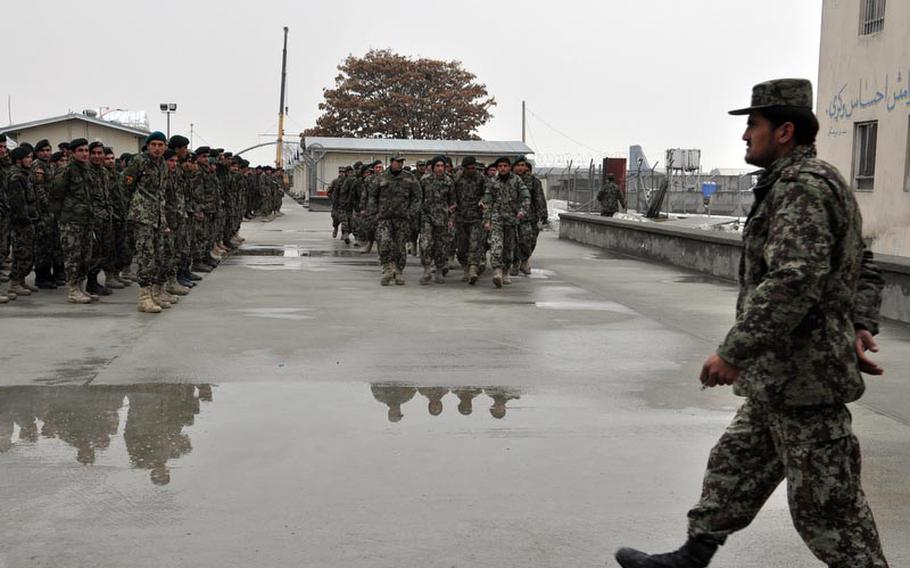 Buy Photo
Afghan Air Force cadets at the Pohantoon-e-Hawayee (the Afghan Air Force college) near the Kabul Airport, march in formation. Like the rest of the Afghan Security Forces, the air force is having trouble finding literate recruits and most of these students are taking classes to gain a basic level of reading comprehension. (Heath Druzin/Stars and Stripes)

Buy Photo
Afghan Air Force cadets at the Pohantoon-e-Hawayee (the Afghan Air Force college) near the Kabul Airport, march in formation. Like the rest of the Afghan Security Forces, the air force is having trouble finding literate recruits and most of these students are taking classes to gain a basic level of reading comprehension. (Heath Druzin/Stars and Stripes) 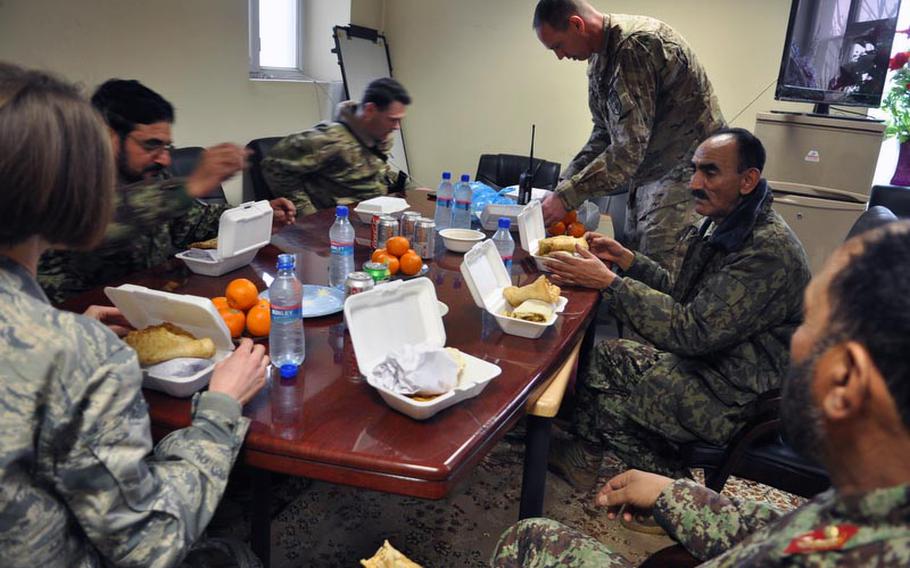 Buy Photo
Air Force Lt. Col. Michael Needham, standing, and his Afghan counterpart, Col. Mahmood Ur Rahman, middle right, sit down to a lunch of Afghan cuisine during a lunch break at Pohantoon-e-Hawayee (the Afghan Air Force College). At the college, as well as at the Thunder Lab program for prospective pilots, Coalition mentors, like Needham, have made a point of sitting down to meals to build camaraderie with their Afghan Air Force counterparts. (Heath Druzin/Stars and Stripes) KABUL &mdash; After more than 30 years of war, the few qualified pilots in Afghanistan are largely graying veterans of the old Soviet-backed military who haven&rsquo;t flown a MiG in decades.

Long before pilots can get in the cockpit, mechanics under the hood or enlisted soldiers to checkpoints, there are two basic problems to address: literacy and, in the case of the pilots, the ability to speak English, which is the international language of aviation.

Several checkpoints past the bustling NATO side of Kabul International Airport, a handful of coalition troops are working to build an air force with a fleet that consists of a few Russian helicopters and a collection of transport planes and Cessnas.

At Thunder Lab, a select group of prospective Afghan pilots live, eat and train with their American and British counterparts in an immersion environment aimed at improving their English, as well as their aviation skills. The students are expected to speak almost entirely English, and push-ups are handed out at formation to those caught straying into their native language.

There is camaraderie among the Afghans and NATO mentors, rare in the country where distrust between forces is the norm &mdash; and more so since the deadly riots triggered by the burning of Qurans at Bagram Air Field and subsequent rash of U.S. deaths at the hands of Afghan troops. Thunder Lab students accompany their coalition counterparts to the dining hall, and mentors sit down to traditional Afghan meals regularly, getting to know each other intimately.

Still, trust extends only so far. Other than gate guards and a few intelligence officers, Afghan soldiers are not allowed to carry weapons on their own base, and their U.S. mentors travel in full body armor to go even the few hundred yards to the entrance of the NATO side of the base. Since the Quran-burning incident, they have taken even more precautions, though officials would not get into specifics.

During the day, Thunder Lab students spend most of the time in the classroom at the Kabul Education Language Training Center, where contract teachers oversee English courses of varying levels. Students must show steady improvement on regular tests and get an 80 percent on a final English exam to go on to pilot training. Many students emerge bleary-eyed in the mornings from all-night study sessions before tests.

One problem is that all but two of the teachers (plus one American mentor who fills in from time to time) at the center are Afghans for whom English is not a first language. In one classroom recently, the Afghan teacher continually stumbled, writing grammatically incorrect sentences as examples on a whiteboard, such as, &ldquo;He goes to bus stop.&rdquo;

In the afternoons and evenings, students head back to Thunder Lab&rsquo;s small collection of two-story metal buildings, where they chat with their mentors and take classes in basic aviation. The classes include the use of flight simulators programmed to mimic the terrain at Shindand Air Base in western Afghanistan, where qualifying students will go to take hands-on flight training. Thunder Lab itself is in the process of moving to Shindand.

Despite the problems, students such as air force Lt. Nilofor Rhamani, one of two women at Thunder Lab, say they are determined to improve their English and make it to the cockpit.

&ldquo;It&rsquo;s my ambition, and I want to serve my country,&rdquo; she said of her goal to fly helicopters for the Afghan air force.

Starting with the basics

Below the pilot level, the air force is struggling, like all the other branches of the Afghan security forces, to recruit literate troops. In a country where only an estimated 28 percent of the population can read, almost all of the recruits who come to Pohantoon-e-Hawayee, or PeH, the Afghan air force training college, are illiterate.

Without the ability to read identification cards and mechanical manuals, the nascent air force won&rsquo;t get off the ground, said U.S. Air Force Lt. Col. Michael Needham, of the 738th Air Expeditionary Advisory Squadron, who oversees the coalition mentoring program. Students must achieve a third-grade reading level in the Dari language (they don&rsquo;t offer Pashto classes, although 35 percent of the population speaks it, and identification cards are in Dari and Pashto).

&ldquo;If they&rsquo;re illiterate and you&rsquo;re going to train them to work on an airplane, well, that doesn&rsquo;t make any sense,&rdquo; he said.

Needham praised his Afghan counterparts, but acknowledged some basic problems. Literacy is required of officers and noncommissioned officers, but it&rsquo;s considered rude to test them; just getting students to show up can be a challenge.

According to the head of the college, Col. Mahmood Ur Rahman, crumbling infrastructure is a major obstacle to recruiting.

&ldquo;The biggest challenge right now is the lack of facilities,&rdquo; he said.

As the lights flickered off on a recent day at the PeH headquarters, U.S. Air Force Master Sgt. Joe Fleming sighed.

&ldquo;And we just lost some translations,&rdquo; he said.

Fleming oversees a team that translates documents, including mechanical manuals, from English to Dari. The power goes out four or five times per day, and there&rsquo;s never enough fuel for the generator. The frequent outages mean lots of do-overs for translators.

Despite the problems, Needham sees progress in his program, which has expanded in terms of both number of students and resources. Prospective mechanics even have a hangar with a Russian Mi-8 helicopter and an airplane engine to practice their skills.

In the midst of hundreds of Afghan students in the middle of an Afghan-run base, trust is everything for Needham and his team of mentors. Needham said there was never talk of shutting down or scaling back the program in the Quran-burning aftermath and subsequent violence, noting his personal relationship with Rahman.

The work will take years, and with President Barack Obama setting 2014 as the deadline for a drawdown of combat forces, Afghan military officials are nervous about the future.

&ldquo;I don&rsquo;t want to talk about 2014 because it&rsquo;s just an idea,&rdquo; Rahman said.

While mentors work hard to improve Afghan skills, some of the security force&rsquo;s most persistent problems &mdash; corruption, nepotism and low pay &mdash; may be beyond the coalition&rsquo;s control. This came into stark relief with the investigation, reported last week by The Wall Street Journal, into possible drug-running by senior Afghan air force officers. They included an Afghan colonel who gunned down eight U.S. Air Force officers last year, allegedly after he was implicated.

During an English speech at Thunder Lab on the history of Afghanistan, one student joked about corruption in his country.

&ldquo;Yama was the first king of Afghanistan; maybe Karzai is the next one,&rdquo; he said.