CENTCOM: Weapons shipment from Iran seized in Arabian Sea was on the way to Houthi rebels in Yemen 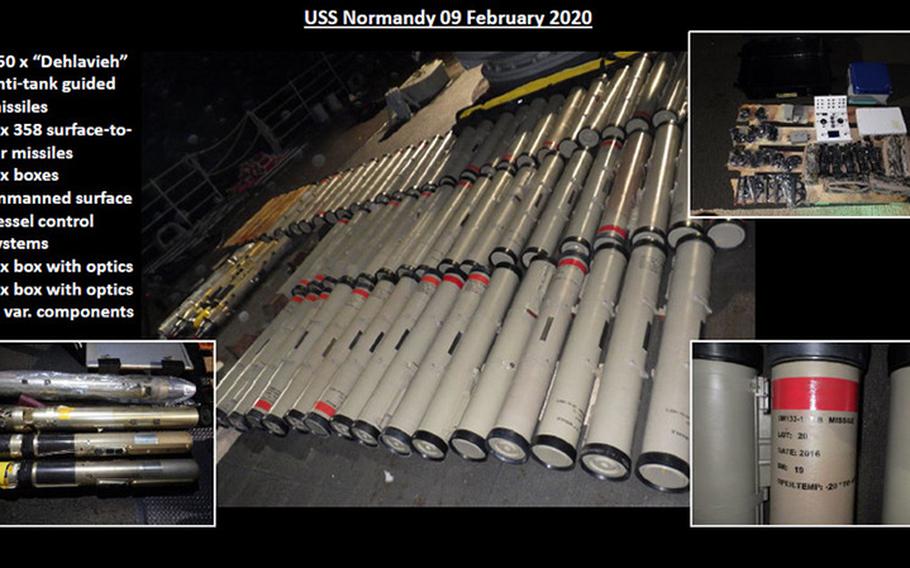 This slide provides a look at the breadth of weapons and components seized by the USS Normandy. It shows anti-­tank weapons, surface-to-air missiles, and various electronic components for unmanned systems. (CENTCOM)

This slide provides a look at the breadth of weapons and components seized by the USS Normandy. It shows anti-­tank weapons, surface-to-air missiles, and various electronic components for unmanned systems. (CENTCOM) 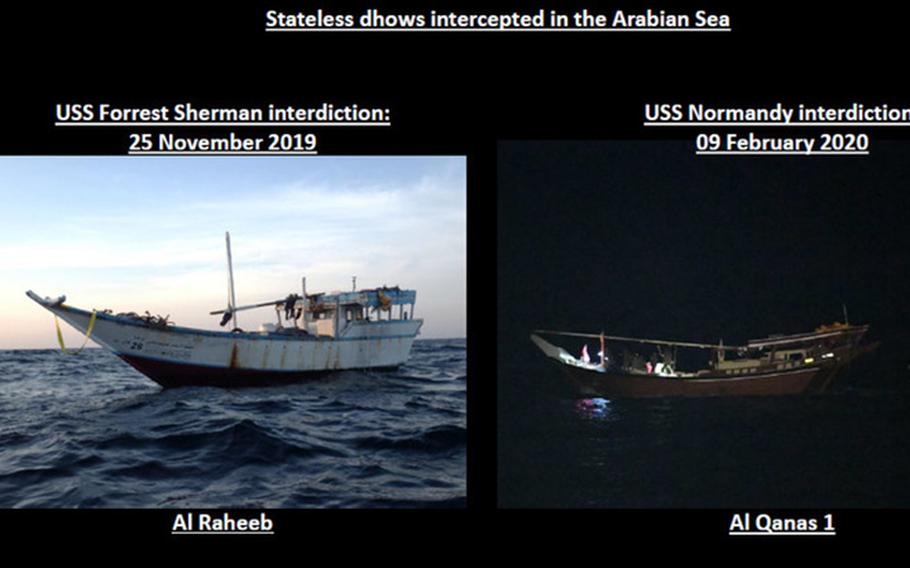 While conducting routine maritime security operations in the Arabian Sea, a team from the USS Normandy boarded this dhow and discovered a large cache of Iranian-made weapons that we assess were intended for delivery to the Houthis in Yemen. (CENTCOM)

WASHINGTON — A U.S. military spokesman said Wednesday that a large shipment of Iranian-made weapons seized last week by the Navy in the Arabian Sea was being transported illegally to Houthi rebels, who have been supported by Tehran in Yemen’s five-year civil war.

The intercepted shipment was found aboard a small sailing vessel know as a “dhow” and discovered during a routine inspection of the boat, which was not flying a national flag. It was the sixth shipment of similar weapons believed to be on the way to Yemen from Iran seized by the U.S. military in the last five years, including a very similar cache seized in November by sailors aboard the guided-missile destroyer USS Forrest Sherman.

“The United States assesses with high confidence that the weapons seized by the USS Forrest Sherman in November and the weapons seized by the USS Normandy in February were manufactured in Iran and were being illicitly smuggled to the Houthis in Yemen,” Urban told reporters Wednesday at the Pentagon. “There is no doubt to where these weapons came from or where they were going.”

Urban cited markings on the weapons in English and Farsi languages that he said were unique to Iranian weaponry. Some of the parts of the cruise missiles matched weaponry used in attacks conducted by Iran and its proxy organizations, including the September attack on Saudi oil facilities by drones and cruise missiles, he said.

The U.N. announced last month that it agreed with the U.S. assessment that the weapons cache left Iran bound for the Houthis. Such shipments from Iran to Yemen are barred by a U.N. Security Council resolution, which restricts Iranian support for the Houthi rebels.

In Yemen, Shiite fighters triggered a devastating civil war when they overran the country’s capital Sana’a in March 2015. The war has sparked the world’s worst humanitarian disaster, according to the U.N., and has resulted in near-famine. The Houthis continue to fight against the U.N.-recognized Yemeni government, which is backed by a Saudi-led military coalition and supported by the United States.

Urban said Wednesday that the Houthis are largely supplied by Iran, especially with advanced weapons including drones and ballistic missiles that have been used to attack military and civilian targets in Yemen and in neighboring Saudi Arabia.

The Navy captain also said he hoped highlighting the continued illicit supply of Iranian weapons to the Houthis would galvanize the international community to take notice, and perhaps take action against Tehran.

The United States and Iran have seen increased tensions in recent years, which reached a boiling point early this year when the U.S. military on Jan. 3 killed Iran’s top military leader, Maj. Gen. Qassem Soleimani, who commanded the Quds Force, which has trained and directed Tehran’s proxy forces.

Iran retaliated by launching more than a dozen ballistic missiles into a key Iraqi base that hosts more than 1,000 American troops. More than 100 U.S. service members suffered traumatic brain injuries in the attack. But President Donald Trump did not retaliate militarily, keeping the tensions from rising further.

Urban said Wednesday that even without Soleimani, the continued shipments of advanced weapons from Iran showed the Quds Force is still supplying proxy forces.

“There’s an extensive portion of weapons being transferred into Yemen,” he said. “That just continues the conflict and continues the suffering.”

See more photos of the seized weapons on a CENTCOM press release.