CENTCOM’s Votel: ISIS will be defeated before US leaves Syria 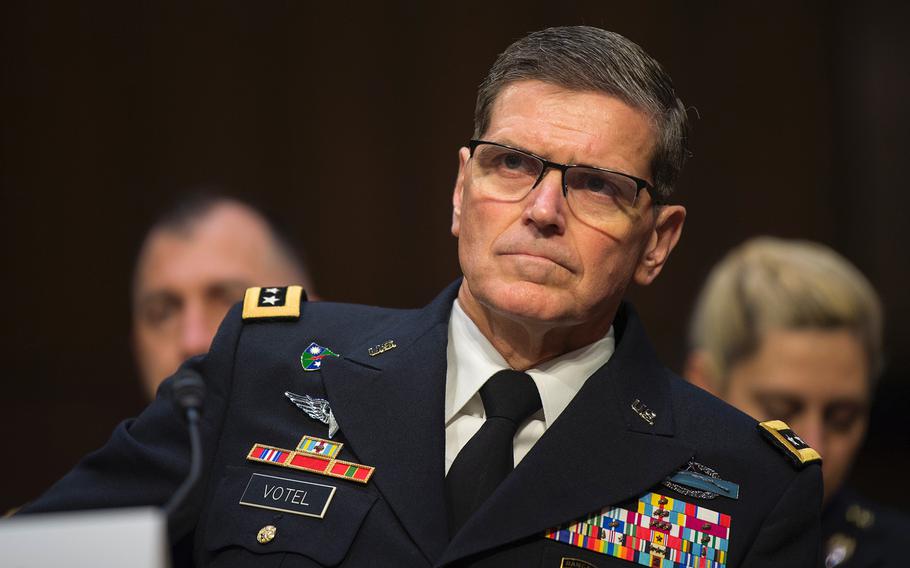 U.S. Central Command Commander Gen. Joseph Votel testifies during a Senate Armed Services Committee hearing on Capitol Hill in Washington on Tuesday, Feb. 5, 2019. Votel told lawmakers that instructions for the withdrawal of U.S. troops from Syria entail “a very, deliberate approach to how we depart.” (Carlos Bongioanni/Stars and Stripes)

WASHINGTON — A top military general told Senate lawmakers Tuesday that the Islamic State will be defeated in Syria and the terrorist group will not be capable of a resurgence after U.S. troops leave the country.

Army Gen. Joseph Votel, commander of U.S. Central Command, made the comments before a Senate panel following weeks of controversial and conflicting plans from top officials from President Donald Trump’s administration on how U.S. troops will leave Syria.

Votel, who has had a 38-year career in the military, is due to leave his post at the end of next month.

“The fight against ISIS and violent extremists is not over and our mission has not changed” in Syria, Votel told members of the Senate Armed Services Committee. “The [U.S.-led] coalition’s hard-won battlefield gains can only be secured by maintaining a vigilant offensive against a now largely dispersed ISIS.”

Votel, in an exchange with Sen. Jim Inhofe, R-Okla., chairman of the committee, said the Syria withdrawal instructions entail “a very, deliberate approach to how we depart.” Votel also confirmed to committee members that he believes the remaining ISIS stronghold in Syria will be eliminated by the time of U.S. troops drawdown.

Votel said there are between 20,000 to 30,000 ISIS fighters left in the region, most of whom are underground or dispersed. He said one remaining ISIS stronghold of about 1,000 fighters remains within a 20-square-mile area near the southern Euphrates River and the Iraqi border.

However, a government watchdog report released Monday suggested the Islamic State in Syria could resurge within six to 12 months and regain territory in the Middle Euphrates River Valley without sustained counterterrorism pressure. Of the territories ISIS controlled two years ago, more than 99 percent has been returned to Syrians, military officials have said.

“We are in a very deliberate planning process for how we will work with the international community, with our partners on the ground and with the rest of the coalition to ensure we can keep pressure on this organization,” Votel said.

The general also stopped short Tuesday of saying the U.S. withdrawal from Syria was time- or conditions-based and postponed many responses to a closed hearing with committee members that was to follow Tuesday afternoon.

In December, President Donald Trump stunned Capitol Hill and the Pentagon with plans that the roughly 2,000 U.S. troops fighting the ISIS in Syria would withdraw from the country within 30 days. Since the Dec. 19 announcement, then-Defense Secretary Jim Mattis resigned and was replaced by his then-deputy Patrick Shanahan in an acting capacity.

Shanahan backed Trump’s decision last week to withdraw troops from Syria and he said the military was in the early stages of the process. He estimated ISIS would lose all of its Syrian territory in the next two weeks.

On Tuesday, Votel confirmed he learned of the Syria withdrawal with Trump’s public announcement.

“I was not consulted,” he said in an exchange with Sen. Angus King, I-Maine.

The administration has also since shifted its plans for what a withdrawal from Syria will look like or when it will happen, raising fierce concerns on both sides of the political aisle.

“In the case of Syria withdrawal, contradictory statements by the president, his national security adviser and other administration officials have only served to underscore that this decision was anything but thoughtful and deliberate,” said Rhode Island Sen. Jack Reed, the panel’s ranking Democrat.

Sen. Marsha Blackburn, R-Tenn., a newcomer to the Senate and the panel, said the move has been clouded in confusion.

“I think the administration has sent some really mixed messages about the terms of the U.S. withdrawal from Syria,” she said.

On Monday, the Senate defied Trump’s plan to withdraw troops in Syria as well as Afghanistan, voting 70 to 26 to reaffirm the U.S. commitment to those countries through an amendment to a larger legislative package on American security in the Middle East. The amendment was authored by Senate Majority Leader Mitch McConnell.

The vote captured the widening gulf between Trump’s view of foreign policy and the upper chamber.

Senate lawmakers also raised concerns Tuesday that the Kurds in Syria, who have fought alongside U.S. troops, must not be abandoned and left to be annihilated by Turkey.

“If they are slaughtered by the Turks, it will be a stain on the honor of this country that will persist” and hurt our ability to attract allies in future, King said.

Last week, Blackburn and Sen. Tammy Duckworth, D-Ill., a combat pilot veteran, wrote to Trump, requesting he stay away from such a move.

“The fact is the president made a decision and we are going to execute his orders to withdraw forces from Syria and as we do that we are going to do that in a very deliberate manner,” Votel told lawmakers.