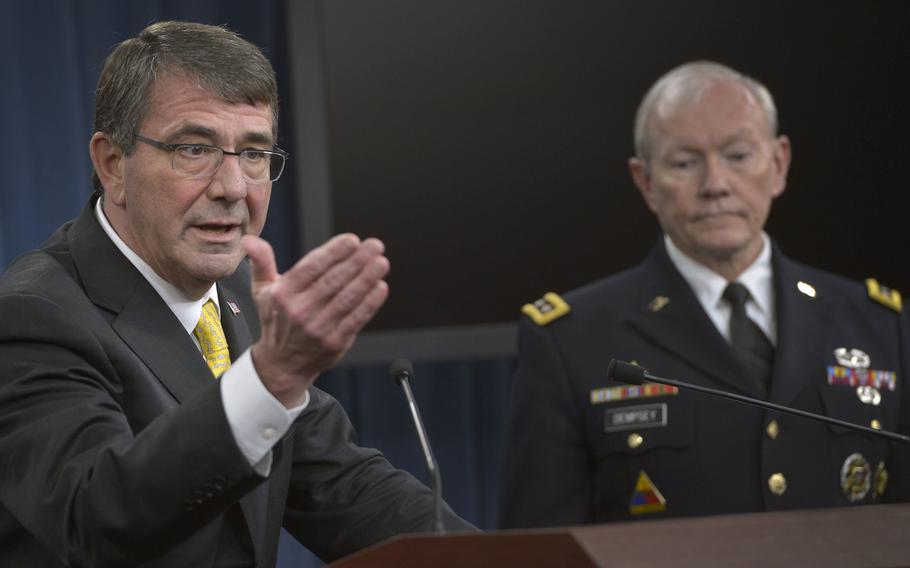 Secretary of Defense Ash Carter and Chairman of the Joint Chiefs of Staff Gen. Martin E. Dempsey hold a press conference in the Pentagon Briefing Room May 7, 2015. (Glenn Fawcett/Department of Defense)

WASHINGTON — Defense Secretary Ash Carter said Wednesday that U.S. training of Iraqi and Syrian forces to fight the Islamic State has been slower than expected, raising doubts about a key part of the U.S. strategy to defeat the extremists.

Only about 7,000 Iraqi security troops have been trained so far, well below the Pentagon target of 24,000 by this fall, Carter told House lawmakers. In Syria, the Defense Department is still struggling to find candidates who could be trained as U.S. allies.

Carter’s comments were made amid growing skepticism in Congress about U.S. progress in the war against the Islamic State. The defense secretary blamed much of the delay in training Iraqi troops on Iraq’s Shiite-dominated government, many of whose members oppose efforts to bring Sunni Muslims into the fight.

“As I’ve told Iraqi leaders, while the United States is open to supporting Iraq more than we already are, we must see a greater commitment from all parts of the Iraqi government,” Carter told the House Armed Services Committee.

The U.S. military has been running four infantry training camps and a special operations site in Iraq. In addition to the 7,000 Iraqi troops trained so far, the U.S. training mission has turned out an additional 2,000 counter-terrorism forces that have fought relentlessly in Iraq, according to Carter.

The U.S. is now deploying an additional 450 American personnel to a new training facility at Taqqadum air base in Anbar province, where they will try to rally Sunni tribes to the fight. U.S. personnel will also advise the leadership in the Iraqi 8th army division as it tries to retake the Anbar capital of Ramadi and other areas lost to the Islamic State.

“The numbers are not as significant as the location,” Carter said of the Taqqadum mission. “It is in the heart of the Sunni territory, and I think it will make a big difference in the performance of the train-and-equip program.”

The additional personnel could have effects on the conflict within weeks, according to Carter.

The Obama administration plans to arm moderate Syrian rebels now fighting the regime of President Bashar Assad and back them in the fight against the Islamic State, which maintains its power center and headquarters in the Syrian city of Raqqa.

Carter said the U.S. is still trying to find fighters who can be trusted and are not aligned with jihadi groups.

“It turns out to be very hard to identify people who meet both of those criteria,” he said.

The U.S. now has training camps for Syrians in allied countries but cannot find enough fighters to fill them, Carter said.

Joint Chiefs Chairman Gen. Martin Dempsey, who also testified before the committee, agreed the Syria program has been more difficult and said the administration is reviewing the kind of training support it might provide. Decisions will be made in the next couple of months, he said.

“It is a little too early to give up on it,” Dempsey said.

The U.S. spent $25 billion training Iraqi security forces before pulling out of the country in 2011. Last year, Islamic State fighters swept across northern and western Iraq from Syria, seizing Iraq’s second largest city of Mosul. Baghdad suffered another major defeat last month when the security forces fled Ramadi after months of fighting, prompting Carter to say the troops lacked the will to fight.

Rep. Mac Thornberry, R-Texas, Armed Services chairman, said it does not seem logical to believe that a new training site in Anbar will cause new Iraq recruits to begin flooding in and there is little likelihood of training allies in Syria “in the near term."

The chairman, along with his GOP colleagues in the House and Senate, has hammered the Obama administration for not having a clear war strategy and pressed for U.S. advisers on the battlefield.

Thornberry said the testimony by Carter and Dempsey did not change his perception that the war is being lost.

“I mean it just doesn’t give you a lot of confidence that this thing is on the right track,” he said.