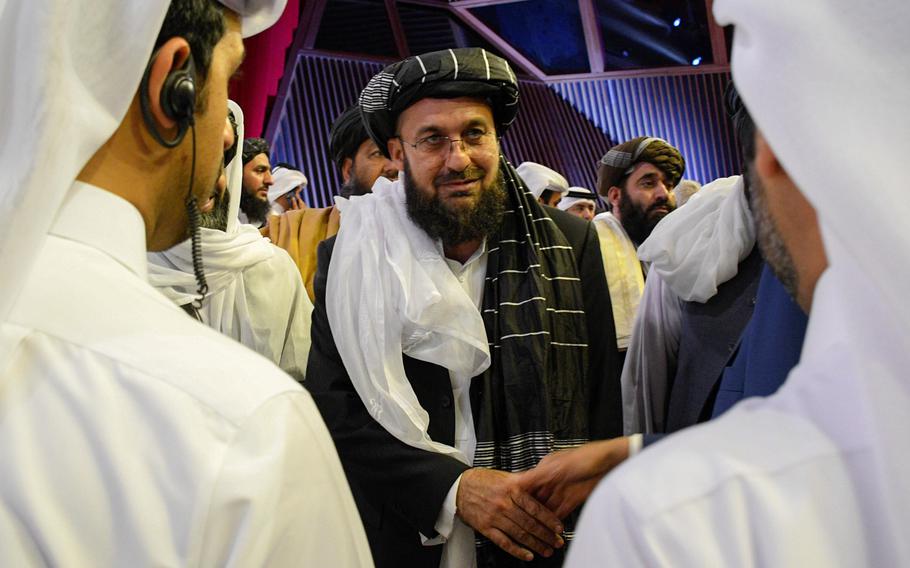 Buy Photo
A Taliban official greets others Feb. 29, 2020, in Doha, Qatar, after the group signed a deal with the U.S. that would lead to the full withdrawal of foreign forces from Afghanistan if the Taliban meets the conditions spelled out in the agreement. The Taliban said they expect the United States and President-elect Joe Biden to continue following the deal. (J.P. Lawrence/Stars and Stripes)

Buy Photo
A Taliban official greets others Feb. 29, 2020, in Doha, Qatar, after the group signed a deal with the U.S. that would lead to the full withdrawal of foreign forces from Afghanistan if the Taliban meets the conditions spelled out in the agreement. The Taliban said they expect the United States and President-elect Joe Biden to continue following the deal. (J.P. Lawrence/Stars and Stripes) 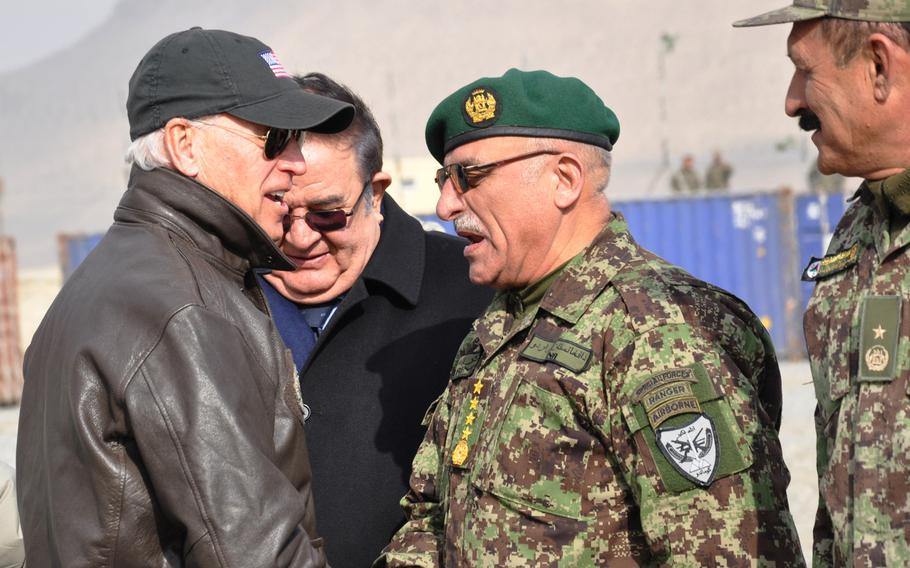 Then-Vice President Joe Biden meets Afghan National Army Chief of Staff Gen. Sher Mohammad Karimi during a tour of the Kabul Military Training Center in 2011. Some Afghan politicians called on President-elect Joe Biden to reevaluate the deal signed in February 2020 between the Trump administration and the Taliban. (Brian Brannon/U.S. Navy) 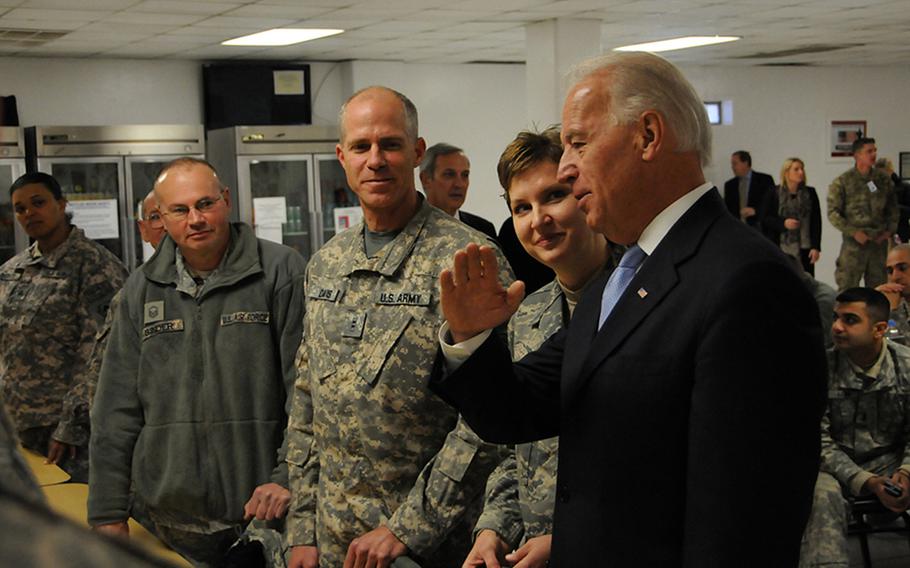 Then-Vice President Joe Biden meets with service members from Delaware during a visit to Bagram Airfield in Afghanistan in 2011. Now the president-elect of the United States, Biden has said he supports keeping a residual counterterrorism force in Afghanistan. (Michael Sparks/U.S. Army)

KABUL, Afghanistan — U.S. President-elect Joe Biden may look to keep a residual counterterrorism force in Afghanistan, a move expected to face resistance from the Taliban, analysts have said.

But even as American gears in the country shift, the Biden administration is expected to retain most aspects of the deal struck in February between the Taliban and the Trump administration, which was supposed to bring peace to Afghanistan, they said.

Like President Donald Trump, the president-elect has spoken out against “forever wars,” including America’s longest, in Afghanistan. But while Trump wanted all troops home by Christmas, Biden has said he would consider keeping a small counterterrorism force there.

“I support drawing down the troops. But here’s the problem, we still have to worry about terrorism and [the Islamic State],” Biden told Stars and Stripes in a telephone interview in September.

Afghan President Ashraf Ghani said in a congratulatory tweet to Biden and Vice President-elect Kamala Harris that he wanted to continue and deepen the “multilayered strategic partnership with the United States … including in counterterrorism and bringing peace to Afghanistan.” He did not directly address whether he wanted the U.S. to maintain a military presence in Afghanistan.

The Taliban, on the other hand, have told Biden he should stick firmly to the deal negotiated by his predecessor — even though they have fallen short of meeting several of the conditions — and fully withdraw international troops by the agreement’s May deadline.

“The Islamic Emirate would like to stress to the … American president-elect and future administration that implementation of the agreement is the most reasonable and effective tool for ending the conflict between … our countries,” the group said in a statement.

Although there have been calls from Afghan lawmakers for the deal struck by the Trump administration and the Taliban to be renegotiated — including the clause calling for the full withdrawal of international forces — doing so would mean the U.S. would have to “recommit to war,” said Ashley Jackson, a researcher with the Overseas Development Institute.

“And I don’t know if the U.S., or Biden specifically, is willing to do that,” Jackson said. “Whatever he does, he’s walking a tightrope.”

U.S. military leaders have said withdrawing all international troops from the country was contingent on the Taliban meeting the conditions in the deal. The focus of the new U.S. administration will be to ensure the security of the United States and its allies, analysts said.

“If the Biden Administration is satisfied on that front, it might largely keep the same deal,” university lecturer and journalist Dawood Azami said.

But the new administration “will definitely be more mindful of the Taliban’s continued ties to al-Qaida,” Husain Haqqani, Pakistan’s former ambassador to the United States, said Tuesday on Radio Free Europe/Radio Liberty’s website.

Still, while the Trump administration has hailed the February deal as historic, violence has sharply escalated in Afghanistan since it was signed. A United Nations report released last month said that, even after another of the deal’s conditions was met and intra-Afghan talks got underway in Qatar in September, Afghanistan remained “among the deadliest places in the world to be a civilian.”

The talks in Doha between the Afghan government and Taliban stalled soon after they began as the two sides dickered over the agenda and the basic framework the negotiations should take. Since then, they’ve made little progress.

And last week, Taliban and Afghan government negotiators in Doha “were glued to televisions and smartphones as (U.S.) election results rolled in,” said a report in the Washington Post on Tuesday.

“Both sides saw the future of peace efforts as closely tied to the outcome, even if many don’t anticipate a dramatic shift in U.S. policy with a Biden presidency.”