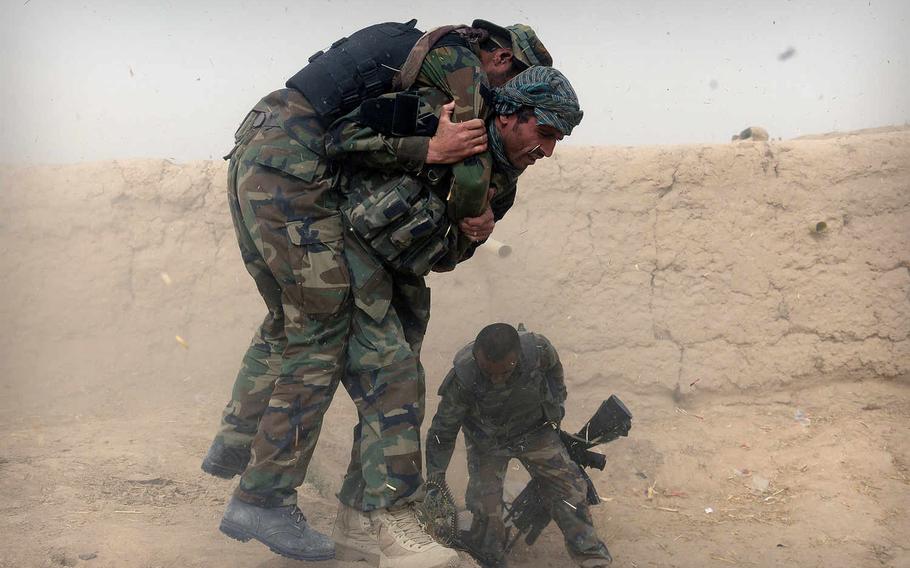 Dust and debris shower an Afghan soldier as he carries a comrade injured during a firefight with Taliban gunmen on the outskirts of Kunduz city. The battle for Kunduz is only one of many that have played out across northern Afghanistan as the Taliban have launched offensives. (Josh Smith/Stars and Stripes)

Dust and debris shower an Afghan soldier as he carries a comrade injured during a firefight with Taliban gunmen on the outskirts of Kunduz city. The battle for Kunduz is only one of many that have played out across northern Afghanistan as the Taliban have launched offensives. (Josh Smith/Stars and Stripes) 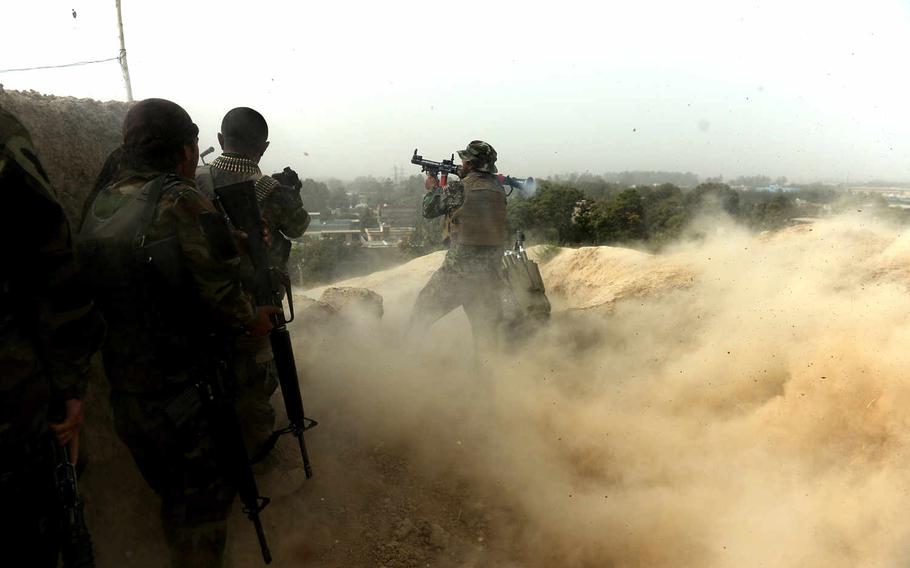 An Afghan soldier fires a rocket-propelled grenade at Taliban positions on the outskirts of Kunduz during mop-up operations in October 2015. It took nearly two weeks of house-to-house fighting before most pockets of Taliban resistance had been eliminated. (Josh Smith/Stars and Stripes) 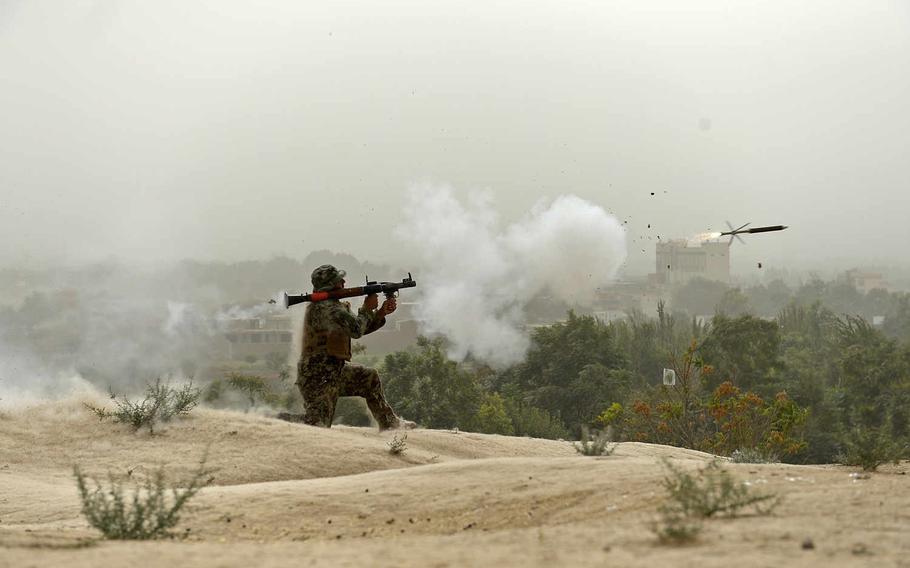 An Afghan soldier fires a rocket-propelled grenade at Taliban positions on the outskirts of Kunduz during mop-up operations in October 2015. Though security forces greatly outnumbered insurgents, the Taliban continued to threaten the area. (Josh Smith/Stars and Stripes) 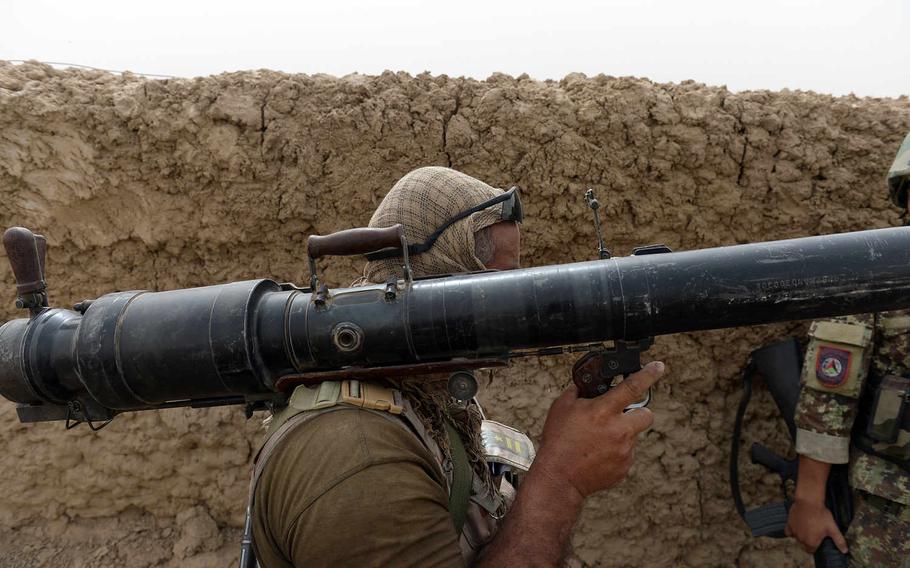 An Afghan army soldier carries a shoulder-fired rocket launcher to the front during an operation to clear Taliban from an area on the outskirts of Kunduz city. Neighborhoods often changed hands as security forces fought to dislodge the insurgents. (Josh Smith/Stars and Stripes) 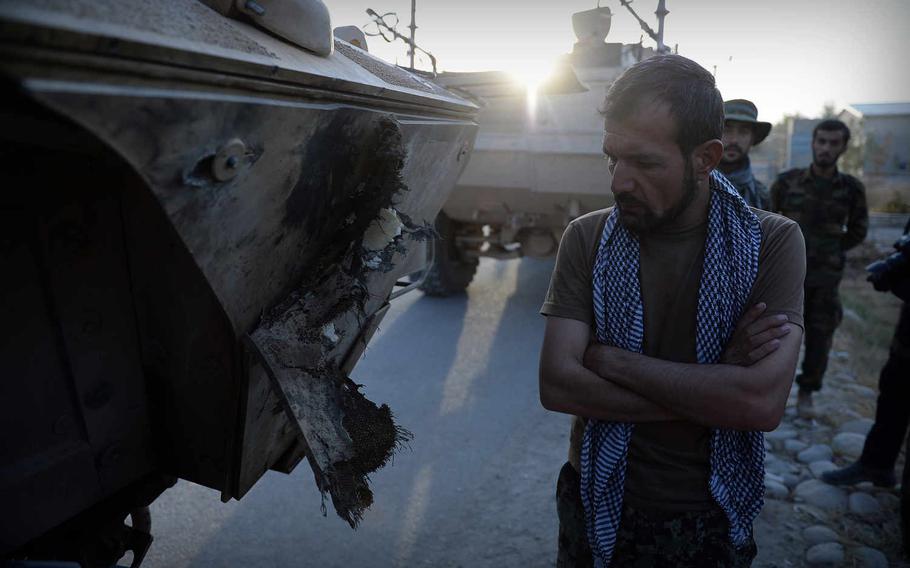 An Afghan army commander examines damage to his armored fighting vehicle caused by a Taliban rocket during battles in Kunduz city. The Taliban's lightning occupation of the city was its greatest victory since 2001. (Josh Smith/Stars and Stripes) 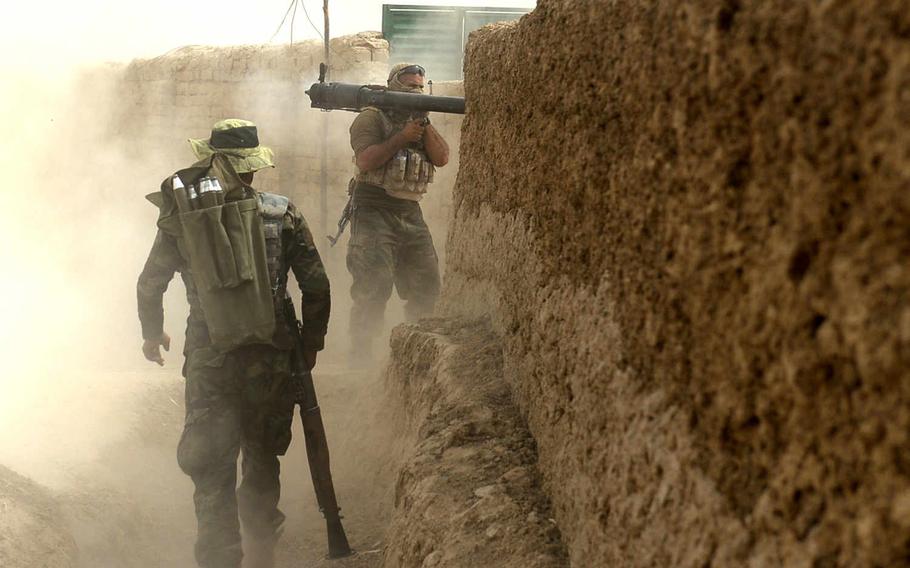 Afghan troops fire rockets at Taliban positions during the battle to clear militants from Kunduz city. The Taliban capture of Kunduz and the struggle to retake the city has called into question the capabilities of the NATO-trained government forces. (Josh Smith/Stars and Stripes) 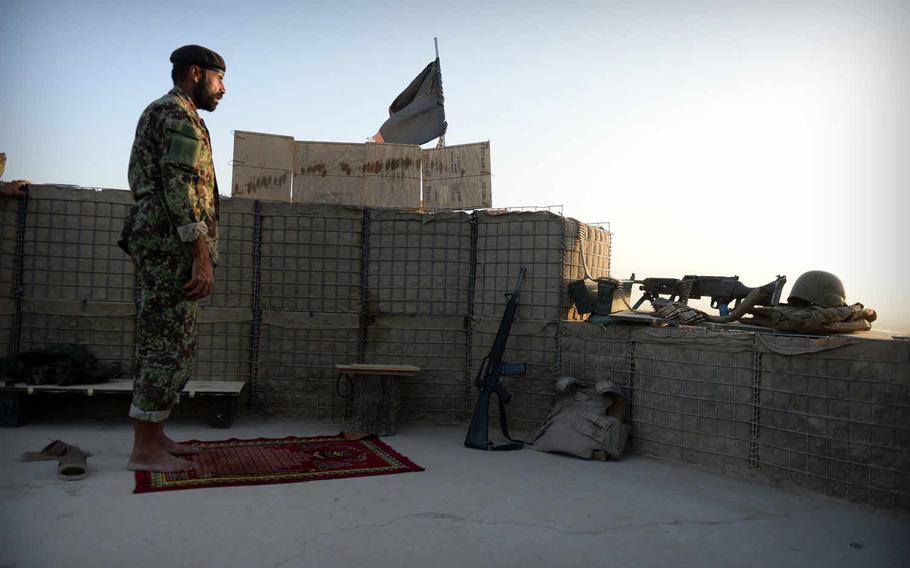 An Afghan army soldier faces the setting sun as he prays at a checkpoint near the Kunduz airport. When Taliban forces captured the city in late September 2015, most government troops retreated to the airport and a nearby military base. (Josh Smith/Stars and Stripes) 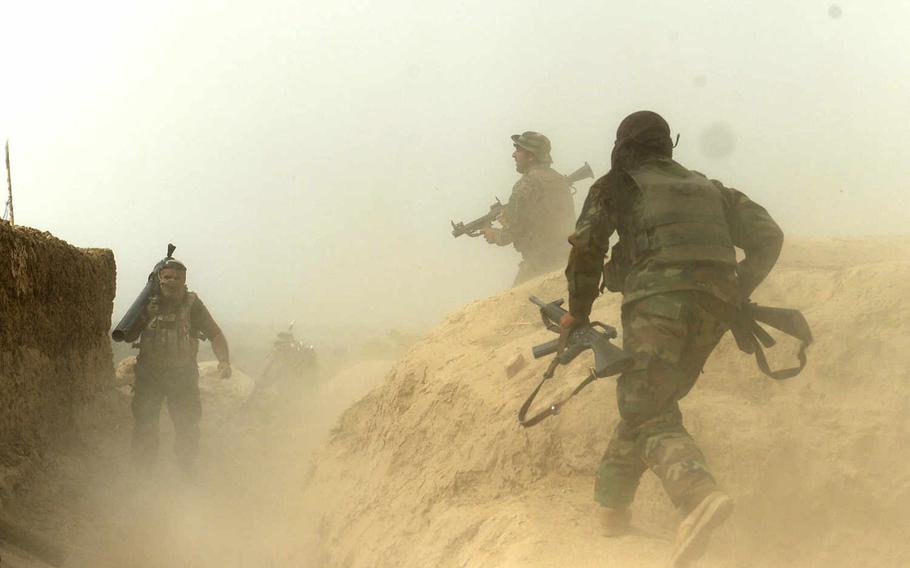 Afghan army soldiers run for position during a firefight with Taliban gunmen in Kunduz city. It took government troops about two weeks to dislodge most Taliban fighters. (Josh Smith/Stars and Stripes) 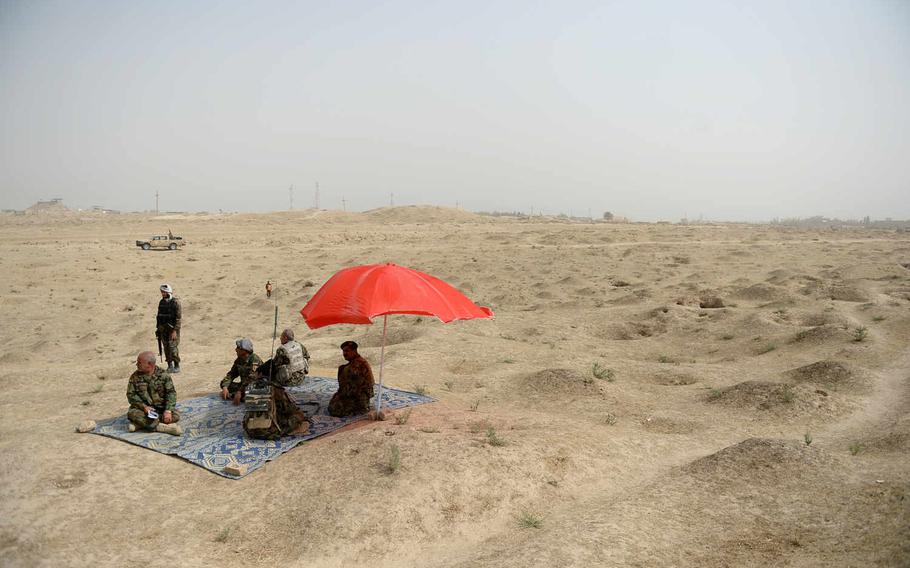 Headquarters staff for the Afghan army's 2nd Brigade, 209th Corps, set up a forward command post in a vast cemetery on the outskirts of Kunduz city during a clearing operation on Saturday, Oct. 10, 2015. (Josh Smith/Stars and Stripes) 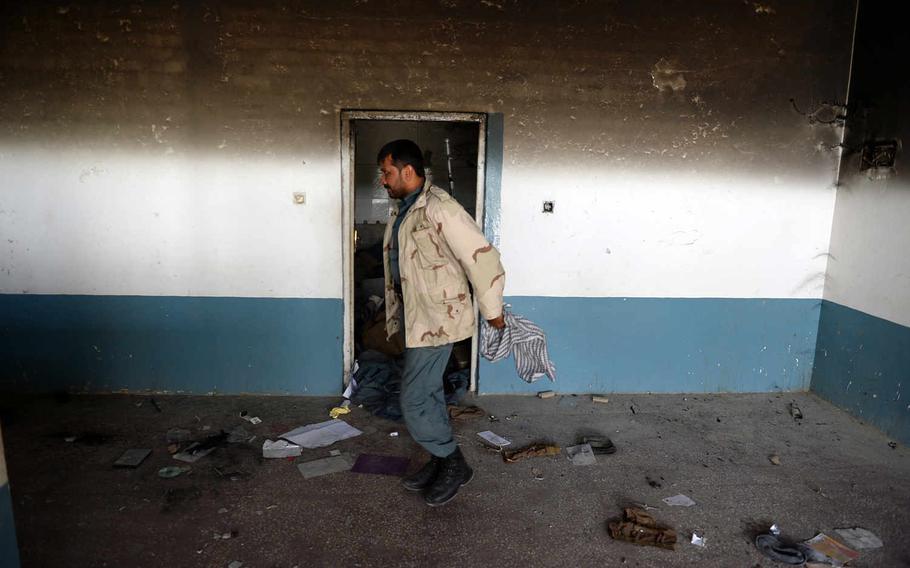 A policeman walks through the burned ruins of a police station in Kunduz, Afghanistan. The station was destroyed and as many as eight officers killed when the Taliban captured the city in September 2015. (Josh Smith/Stars and Stripes) 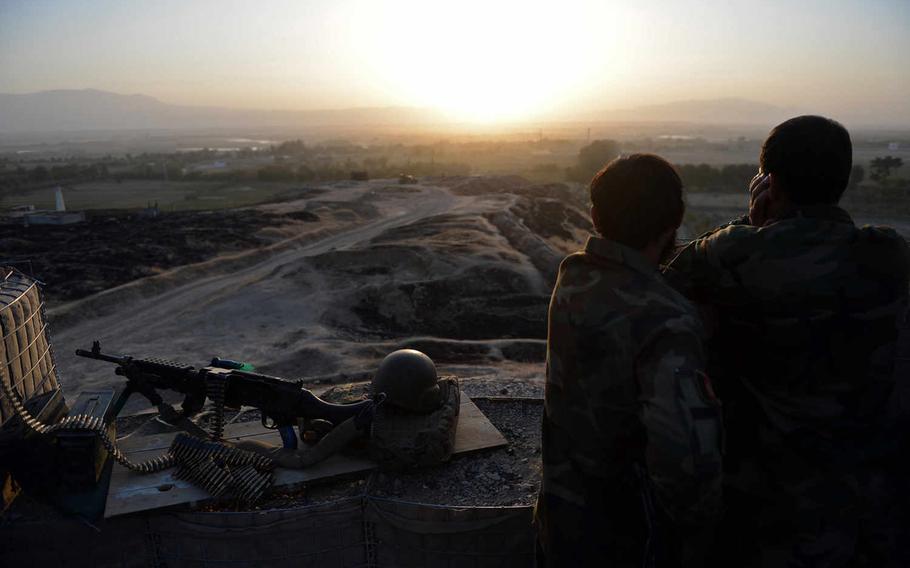 Two Afghan soldiers at a base near the Kunduz airport watch the sun set over Taliban positions across the Kunduz river. Most government troops felll back to the airport and its nearby military bases when the Taliban overran the city. (Josh Smith/Stars and Stripes) 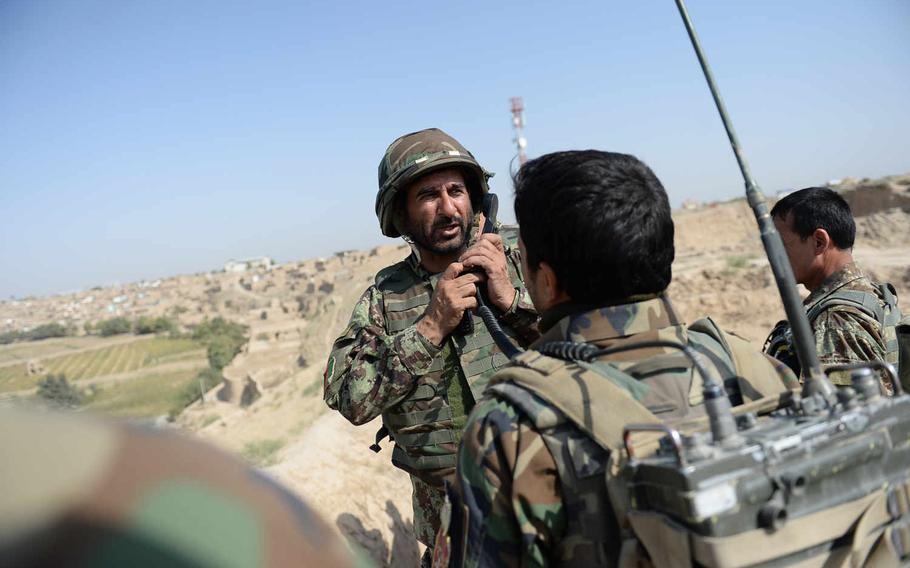 Brig. Gen. Ahmad Habibi, commander of the Afghan army's 2nd Brigade, 209th Corps, gives commands over his radio during a clearing operation on the outskirts of Kunduz city on Oct. 10, 2015. Habibi says the Taliban can now fight with nearly the strength they could before 2001. (Josh Smith/Stars and Stripes) 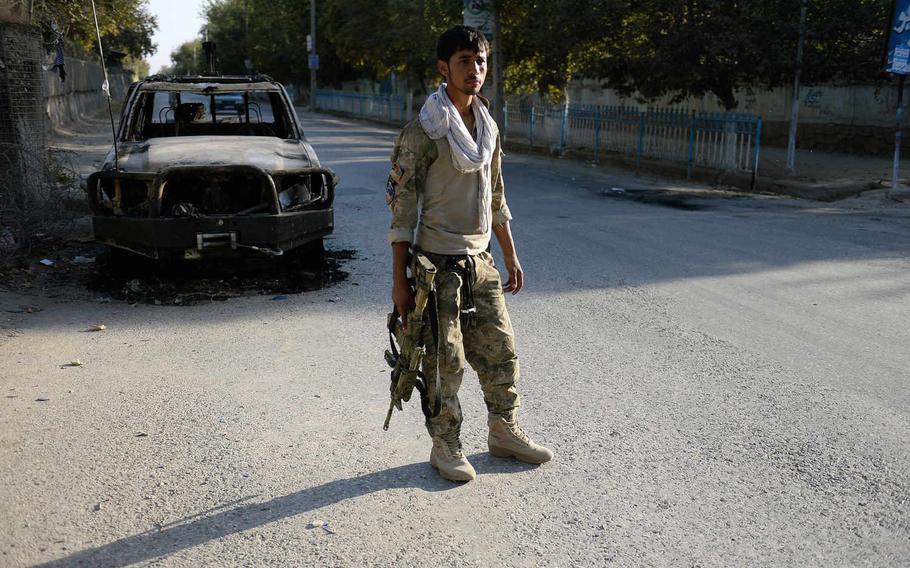 An Afghan police officer mans a checkpoint next to a burned-out military truck in Kunduz after security forces pushed Taliban fighters from the city's center. The capabilities of the NATO-trained forces have been called into question by the Taliban's brief occupation of the city. (Josh Smith/Stars and Stripes)

KUNDUZ, Afghanistan — The Afghan army’s limitations in urban fighting were on full display during the two-week effort to drive the Taliban from Kunduz — a city that the insurgents overran in a single day.

The Taliban announced Tuesday they were pulling out of Kunduz, insisting they had not been beaten but had chosen to withdraw to spare further civilian casualties. Afghan forces had pushed Taliban fighters from most of the city in two weeks of fighting after the millitants’ biggest battlefield success since they were driven from power in 2001.

Even though Afghan security forces have finally prevailed, the Taliban’s ability to seize a major city — especially one far from their traditional southern strongholds — threatens to change the character of the war, which had been fought mostly in rural areas.

“The Taliban have the capability to fight like they did before 2001,” Afghan army Brig. Gen. Ahmad Habibi said Saturday as he nodded toward his troops firing rocket-propelled grenades and heavy machine guns on the outskirts of Kunduz. “The terrorists fought the NATO coalition, and they are still fighting now.”

Before the U.S.-led invasion of 2001, the Taliban had seized Kabul and nearly all major cities.

The Afghan security forces, however, have had little experience with full-scale urban warfare — a weakness that was clear during the Kunduz fighting.

Raining down fire on outnumbered Taliban fighters barricaded in houses below, Habibi’s troops struggled with old weaponry, sometimes banging rocket-propelled grenade launchers on the ground to get them to work; and in one instance, they threw an apparently faulty RPG warhead down the hill into residential houses below.

At one point, debris from the back blast of an RPG fired carelessly by an Afghan soldier tore a chunk of flesh from the leg of a comrade.

In their initial assault on Kunduz, the Taliban successfully exploited weaknesses in the security forces, which far outnumber the insurgents. Insurgents not only successfully infiltrated the city, but their forces in neighboring provinces prevented reinforcements from reaching Kunduz for days.

Soldiers on the front lines told of frantic efforts to escape the advancing Taliban forces as government control collapsed in a matter of hours in Kunduz on Sept. 28. Residents and security forces alike said police largely melted away without much of a fight, while army troops were too far away to quickly respond.

Sgt. Abdul Ghani, who commands an American-made Mobile Strike Force Vehicle, was among the reinforcements dispatched to the city on the first day to try to stem the insurgent offensive.

Driving into the city in their armored vehicles, the troops were ambushed by Taliban fighters. The soldiers returned fire with their vehicles’ turret-mounted machine guns and grenade launchers, fighting their way out of a flurry of automatic gunfire and incoming rockets.

In the face of the onslaught, Ghani said, his force of three vehicles fell back to the base at the old fortress Bala Hisar, north of the city. As Taliban fighters closed in on the besieged troops and police at the fortress, the defenders collapsed. Some ran away, and dozens reportedly surrendered. Ghani said his trucks, packed with soldiers, burst from the base and rammed through several insurgent roadblocks before escaping to rejoin the majority of the city’s defenders, who had retreated to the airport and a nearby army base south of Kunduz.

Other security forces weren’t so lucky. In the burned-out remains of a police station, officers told of a lightning Taliban assault that left at least eight of their colleagues dead.

Among other shortcomings, Afghan National Defense and Security Forces are often plagued by poor coordination, and are known for staying in static defensive positions like checkpoints and bases, the top American and coalition commander in Afghanistan, Gen. John Campbell, told Congress last week.

“In general, I would characterize the ANDSF’s performance this fighting season as uneven and inconsistent,” he said, arguing that Afghan leaders will need to learn how to better decide “when to take the offensive, when to defend, and where to assume risk.”

“They do not possess the necessary combat power and numbers to protect every part of the country,” Campbell said. “This makes it very difficult for the ANDSF to counter the Taliban’s ability to temporarily mass, seize an objective, and then blend back into the population when confronted with an ANDSF counterattack.”

But the already overstretched Afghan troops are being asked to defend an increasing number of areas. According to The New York Times, the United Nations estimates that the Taliban have spread through more of the country than at any point since 2001, challenging contentions by Campbell and other military officials that the government still controls “nearly all” of the district centers.

The Taliban advances in the face of struggling security forces have also drawn American troops into the fight. Special operations troops in Kunduz conducted night raids alongside Afghan commandos, and American airstrikes are credited with helping prevent a total government loss in Kunduz.

The increased fighting in urban areas has exacted a terrible toll on the civilians caught in the crossfire. An American airstrike reportedly called in by U.S. special forces on Oct. 3 struck a charity hospital, killing at least 22 medical staff and patients, some of whom burned to death in their beds. Aid organizations also reported abuses by Taliban fighters as they stormed into the city.

The debacle in Kunduz is a dire warning of what could come as the Taliban attack more cities, said Jason Lyall, director of the Political Violence Field Lab at Yale University.

“In particular, the operation shed light on the poor morale of the ANSF and their lack of coordination with local militia and among senior commanders,” Lyall said. “Figuring out whether the ANSF will fight, and what the local populations will do when the Taliban arrive, will be key lessons if the Taliban shift to more urban operations. Since many key urban centers are now partly or mostly encircled, this may represent the next phase of the war.”

Farshad Usayn and Zubair Babakarkhail contributed to this report.