Austin: Islamic State fighters in Kobani are targets of opportunity 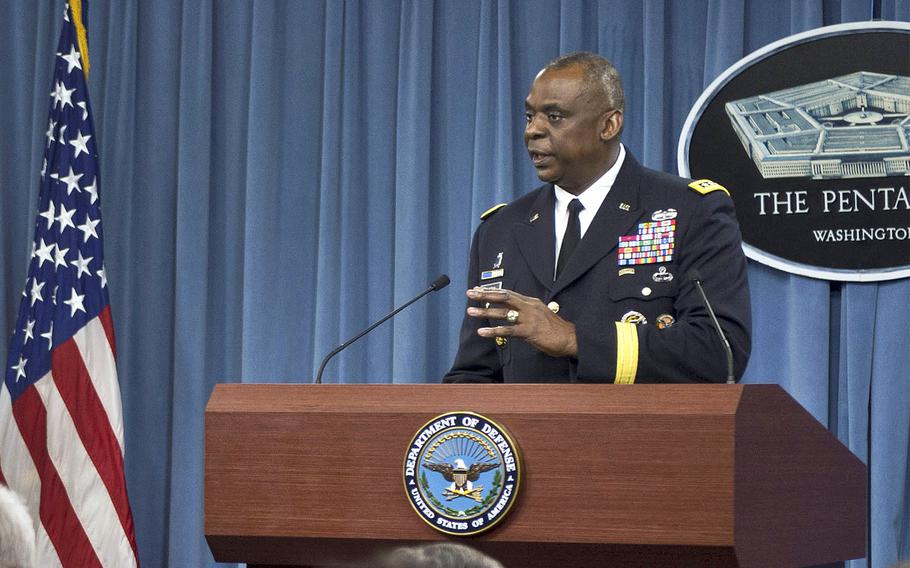 WASHINGTON — The United States is focused mainly on the security of Iraq, but Islamic State fighters attacking the Syrian town of Kobani in recent days have made themselves targets of an opportunity too good to pass up, the commander of U.S. forces in the Middle East said Friday.

The Pentagon has said hundreds of Islamic State militants have died in dozens of U.S. airstrikes around the town near Syria’s border with Turkey. That reduces the number of extremist fighters available to attack Iraq, Gen. Lloyd Austin told reporters at a Pentagon press conference.

“In my assessment, the enemy has made a decision to make Kobani his main effort, and what you’ve seen him do in the last several days is continue to pour manpower into that effort,” Austin said. “As long as he pours legions of forces into that area, we’ll stay focused on taking them out.”

Strikes near Kobani have significantly outnumbered airstrikes within Iraq since last week, and Austin noted that Islamic State leaders might try to conduct operations within Syria to divert attention from U.S. priorities in Iraq.

“We must be mindful of this and we must remain focused and disciplined in our approach,” he said.

On Thursday and Friday, U.S. aircraft conducted six strikes near Kobani, knocking out Islamic State-held buildings, vehicles and fighting positions, according to officials from U.S. Central Command. Another Syria airstrike targeted an militant-controlled oil refinery, while in Iraq, unspecified “partner nation aircraft” from two separate countries destroyed an artillery piece, wiped out an ammunition depot and targeted a small Islamic State unit on the ground north of Baghdad near the city of Bayji, CENTCOM officials said.

Other factors have weighed against a robust pace of air operations in Iraq’s Anbar province, where the Islamic State fighters have made gains since the U.S. operation — named Operation Inherent Resolve just this week — began in August.

Weather in Iraq in recent days has hampered reconnaissance and reduced opportunities for U.S. attacks on militants, he said.

Austin said political objectives regarding the government of Iraq, as well as those aimed at building a coalition of regional partners, also make planning airstrikes there difficult because of the risk of collateral damage.

“Had we killed a lot of innocent civilians, specifically in Sunni areas, I think that it’s fair to say that we would be in a much different place at this point,” Austin said. “But because we’ve done this the right way, we’ve secured the support of our Sunni Arab partners in the region, and together we are making progress.”

Despite the limitations, Austin said the United States air campaign is achieving the “desired effects” of stopping Islamic State fighters from moving about Iraq in massed groups and has hampered their communications and command and control efforts as well. The measured U.S. campaign will take time, he said, and the goal is for a unified Iraqi military to eventually do the necessary job on the ground of taking and holding territory. The United States training and advisory mission is designed to bring that about, he said.

Iraqi and Kurdish troops have made incremental gains on the ground, taking back territory lost earlier this year to militants, Austin said. The big test is likely to be urban combat with dug-in Islamic State opponents in the major city of Mosul, for which Austin indicated Iraqi forces aren’t yet ready.

“Mosul is probably going to be a much bigger effort, and again, we’re going to need to regenerate a bit more combat power and do some more things to shape the environment before we go after Mosul,” he said.

Austin said the United States and its allies also have much work ahead to develop a reliable ground force of coalition-backed rebel fighters in Syria able to take on the Islamic State, also known as ISIL. But by the time they’re ready to go, Austin said he thinks the U.S. campaign will have winnowed down the militant group’s power significantly.

“What does ISIL look like eight months to a year from now?” he said. “My personal opinion is that they’ll be much degraded from what they are now.”