At Role 3 hospital, ‘There’s essentially nothing that can come in here that we can’t handle’ 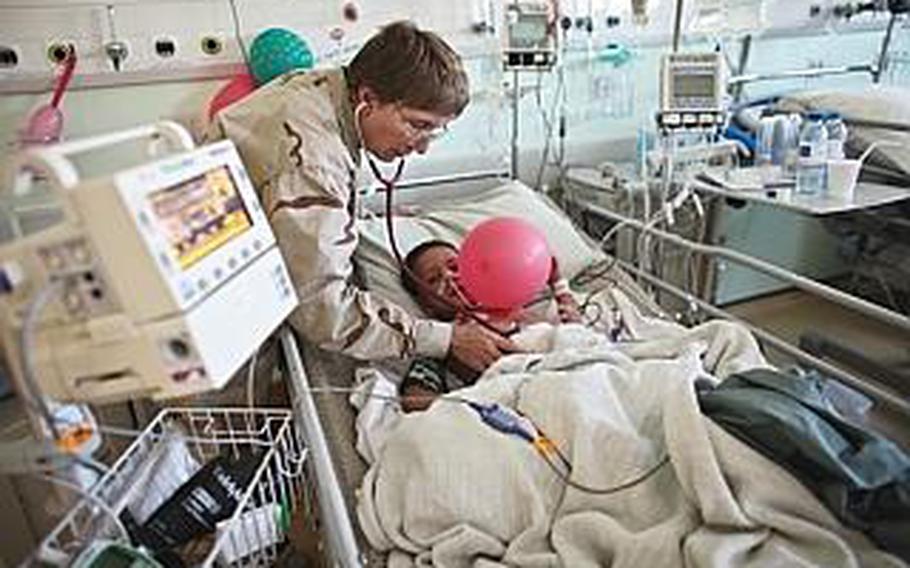 Buy Photo
Razzia's brother, 8-year-old Nic Mohammad, who was injured in the same bomb blast as his sister, recuperated more slowly because of the extent of his injuries. (Drew Brown/Stars and Stripes)

Buy Photo
Razzia's brother, 8-year-old Nic Mohammad, who was injured in the same bomb blast as his sister, recuperated more slowly because of the extent of his injuries. (Drew Brown/Stars and Stripes) 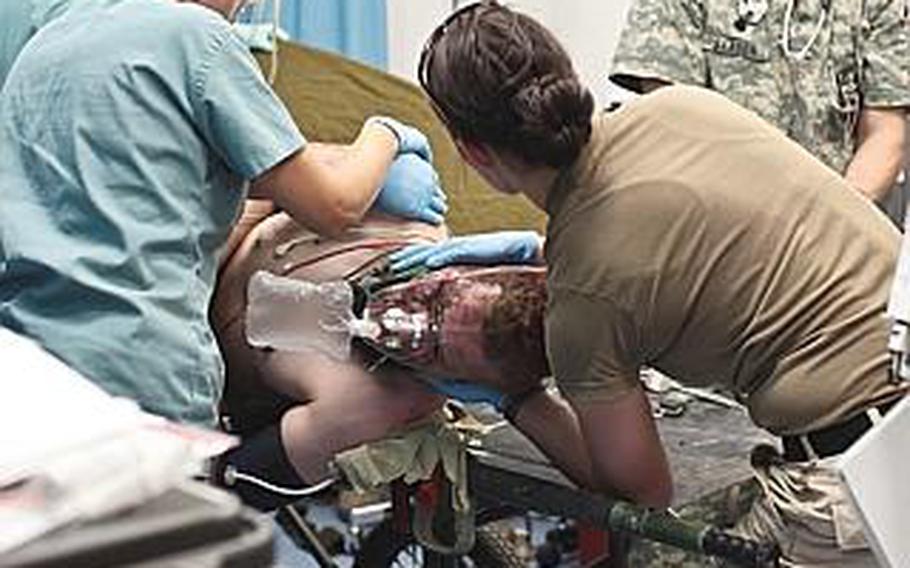 Buy Photo
Trauma room staff at Kandahar Airfield's Role 3 hospital roll a wounded U.S. soldier over onto his side to check for injuries to his back. Although the soldier had been wounded in a bomb blast and received extensive shrapnel wounds to his face and side, none of his injuries were life-threatening. (Drew Brown/Stars and Stripes) 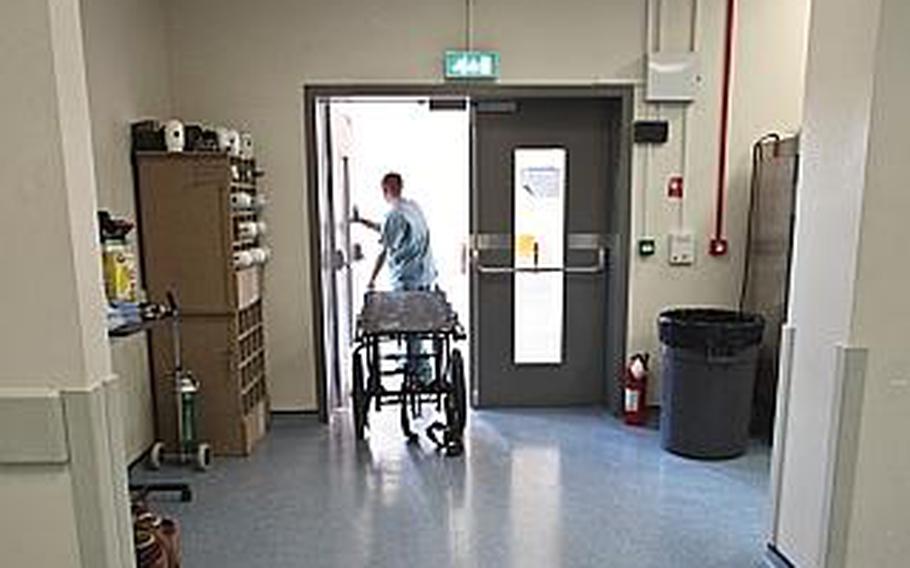 Buy Photo
A trauma room staff member at Kandahar Airfield's Role 3 hospital wheels a gurney that has just been used to bring in a wounded U.S. soldier back outside where it will wait for the inevitable next patient. (Drew Brown/Stars and Stripes) 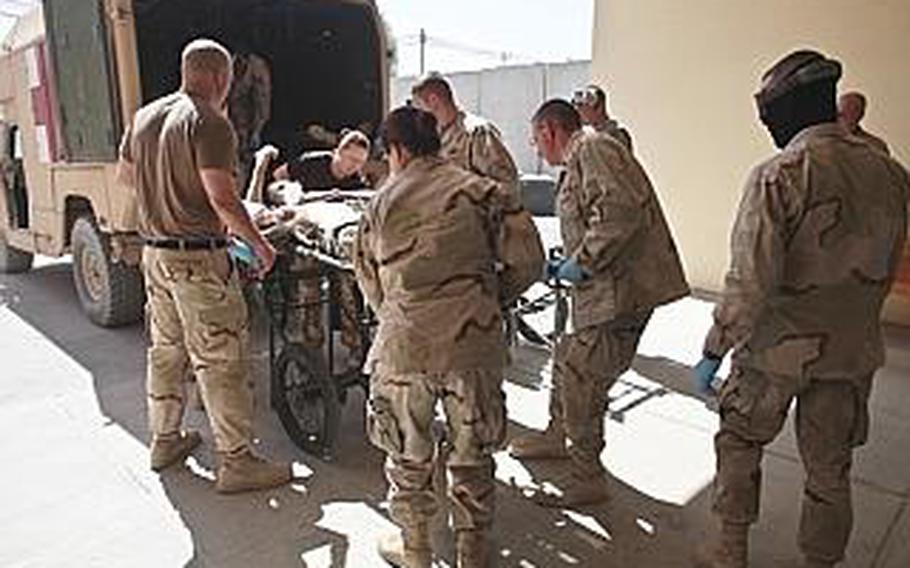 Buy Photo
The next day, Pfc. Kevin Macari, wounded by a Taliban bomb blast is brought into Kandahar Air Field's Role 3 hospital. Macari lost a foot in the blast. (Drew Brown/Stars and Stripes)

Second in a two-day series

KANDAHAR AIR FIELD, Afghanistan &mdash; The U.S. soldier arrived at NATO&rsquo;s Role 3 hospital here in dire shape. A homemade Taliban bomb had torn off both legs and an arm, and he had lost a tremendous amount of blood.

But he survived, and within 24 hours, was on his way through the military health-care pipeline back to the United States, thanks to the care he received at this state-of-the-art hospital.

Despite increasingly severe battlefield injuries, 98 percent of all patients who make it to NATO&rsquo;s Role 3 at Kandahar Air Field survive, military officials say.

&ldquo;There&rsquo;s essentially nothing that can come in here that we can&rsquo;t handle,&rdquo; said U.S. Navy Dr. (Capt.) Michael McCarten, commander of the Role 3 hospital.

Opened in May, the $60 million hospital is built to withstand direct hits from rockets and other high explosives. It replaced a ramshackle structure made primarily of plywood and protected by sandbags and concrete blast walls. The U.S. Navy took over hospital operations from Canadian forces in August 2009.

Its trauma bay can handle several dozen severely injured patients at any given time. During one recent week, nearly 100 trauma patients were treated &mdash; an all-time high. Increasing their odds: multiple operating rooms, a dozen ICU beds, clinics for traumatic brain injury and physical therapy, and access to specialists in neurosurgery and orthopedics.

&ldquo;If they come in with vital signs ... if they make it to the door alive, there&rsquo;s a 98 percent chance they&rsquo;re going to leave alive,&rdquo; McCarten said.

With U.S. and other NATO forces stepping up operations in southern Afghanistan since this summer, the Taliban have been fighting back with larger and more powerful bombs. The result: More soldiers and civilians losing limbs than at any other time since the war began in 2001.

According to hospital staff, at least 67 of the nearly 800 battlefield casualties treated at Kandahar Air Field&rsquo;s Role 3 from May through September &mdash; the traditional fighting season in Afghanistan &mdash; had lost at least one limb. Of the 432 battle casualties treated during the same period last year, only 28 suffered amputations, officials said.

More than half of the cases this year were U.S. or other NATO troops. The rest were Afghan soldiers and civilians too badly hurt to be cared for at nearby Afghan military or civilian hospitals.

About 45 percent of all battlefield injuries treated at Role 3 are caused by improvised explosive devices, records show.

&ldquo;The amputation cases that we&rsquo;re getting this year are a lot sicker than they were last year,&rdquo; said U.S. Air Force Maj. Randy Snoots, a nurse trauma coordinator. &ldquo;In a lot of cases, it&rsquo;s more than one limb.&rdquo;

Nearly 300 U.S. servicemembers have lost limbs in Afghanistan since the war began in 2001, according to statistics provided by the Army and Navy, which handle the vast majority of battlefield casualties. At least 87 servicemembers had lost more than one limb.

Snoots, who served six tours in Iraq before this, his first in Afghanistan, says that the insurgent-made bombs there didn&rsquo;t compare to those in Afghanistan &ldquo;with the size of the bombs ... and the sheer amount of energy produced.&rdquo;

Canadian Lt. Cmdr. Catherine Campbell, a nurse trauma coordinator who served in Afghanistan in 2007, said the bombs are becoming much more powerful.

&ldquo;Initially, you&rsquo;d see a foot gone or below the knee. But now we&rsquo;re seeing [amputations] above the knee and into the groin,&rdquo; she said.

&ldquo;That will be two limbs partially or fully amputated [upon arrival], plus a bad head injury and a bad abdominal injury,&rdquo; he said.

The only comparable injuries in the civilian world would be those a pedestrian who&rsquo;s been hit by a car, said U.S. Navy Cmdr. Dr. Rodd Benfield, chief of trauma. &ldquo;But you still don&rsquo;t see the amount of contamination [in the wounds] that you see with war injuries.&rdquo;

In previous conflicts, polytrauma patients typically died. But they are surviving more often today because of body armor that protects vital organs and because soldiers have been well-trained in how to use tourniquets. Today&rsquo;s soldiers are also &ldquo;extremely fit,&rdquo; Elster said, and trauma techniques have improved.

Wounded soldiers have more than a fighting chance at hospitals like Role 3, which boasts several operating rooms &mdash; the military won&rsquo;t give the exact number &mdash; a diagnostic laboratory, radiology section, pharmacy, optometry center and mental health clinics, plus access to oral and maxillofacial surgery, U.S. Navy makes up about 70 percent of the 200 to 300 personnel assigned to Role 3, with others from Canada, the United Kingdom, Australia, the Netherlands, Denmark and Romania.

Most of the badly injured troops are treated and transported within hours to Bagram Air Base, north of Kabul, and then on to the U.S. military hospital in Landstuhl, Germany.

&ldquo;We typically get these guys out of here within four to eight hours,&rdquo; said U.S. Navy Lt. Chad Walls, a nurse coordinator for medical airlift flights. Less urgent cases are usually transported within 12 hours, he said.

Since blast victims often suffer a tremendous amount of soft tissue damage, necrosis &mdash; a condition in which flesh begins to die &mdash; can quickly set in if the wounds are not properly treated, said U.S. Navy Dr. (Lt. Cmdr.) Christiaan Mamczak, chief of orthopedics.

Severely injured U.S. troops undergo as many as 10 to 12 surgeries and &ldquo;washouts&rdquo; to clean their wounds between the Role 3 hospital, the Bagram facility, Landstuhl and Walter Reed or Bethesda military hospitals outside Washington, Elster said, before their wounds are finally closed.

But they&rsquo;ve made it. The medevac crews and the staff at the Kandahar Role 3 have done their job.