As Mattis takes helm of CENTCOM, Gates praises his leadership 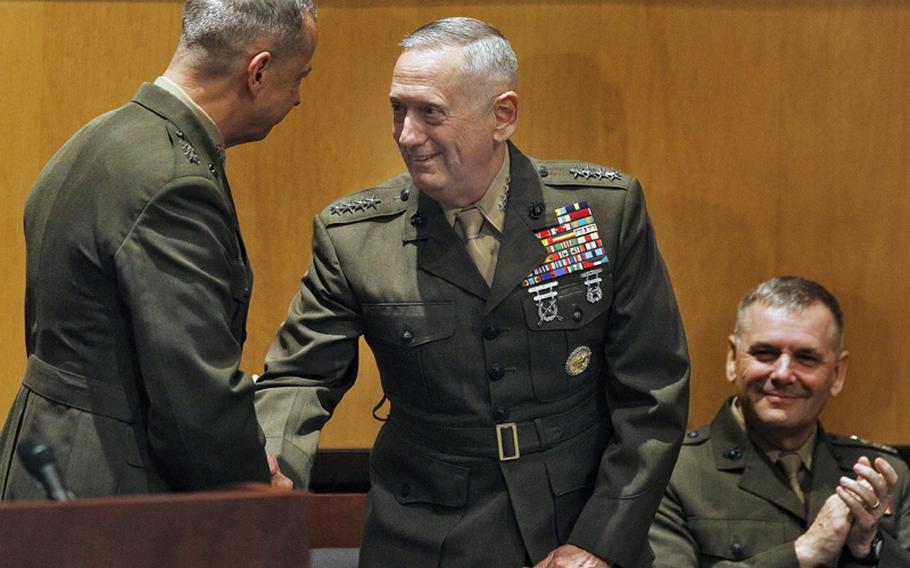 MacDILL AIR FORCE BASE, Fla. &mdash; Marine Corps Gen. James Mattis took the reins of U.S. Central Command on Wednesday evening, capping a major shakeup in military leadership that began with the publication of a sensational Rolling Stone article in June and the ensuing resignation of the Afghanistan war&rsquo;s top commander.

Mattis succeeds Gen. David Petraeus, perhaps the nation&rsquo;s most popular man in uniform, who after helping turn around the war in Iraq spent two years building a reputation as a military-diplomat, crisscrossing the Middle East and glad-handing national leaders in an effort to expand the U.S. military footprint and build up a regional strategic partnership.

President Barack Obama handpicked Petraeus to take over in Kabul for Gen. Stanley McChrystal, who was fired after the Rolling Stone article quoted him and his staff making disparaging remarks about their civilian superiors, including Obama and Vice President Joe Biden.

"Instead, he has answered his country&rsquo;s call once more.&rdquo;

Mattis has both the combat and academic experience, Gates noted, from commanding a battalion in Kuwait during the first Gulf War to inserting the first conventional troops into Afghanistan after 9/11 and commanding the 1st Marine Division in Iraq. He later led I Marine Expeditionary Force and Marine Forces Central Command, then was NATO supreme allied commander for transformation before taking the helm at another combatant command, U.S. Joint Forces Command.

At the twilight of his career, this summer Mattis was passed over as the next Marine Corps commandant and was headed toward retirement before the call for CENTCOM came.

Gates has now presided over the CENTCOM commander ceremonies for a sailor, Navy Adm. William Fallon; a soldier, Petraeus; and a Marine.

Marine Corps Gen. James Cartwright, vice chairman of the Joint Chiefs of Staff, and Marine Corps Lt. Gen. John Allen, deputy CENTCOM commander who served as acting chief, also lauded Mattis&rsquo; 40-year career from the stage. Allen shared his faith in Mattis&rsquo; leadership over the coming end of Operation Iraqi Freedom and the ensuing Operation New Dawn to close the Iraq war, among a list of other challenges ahead.

&ldquo;After that many good things said about me I was starting to think it was a eulogy,&rdquo; Mattis said.

Gates actually spent more time praising the command&rsquo;s accomplishments under Petraeus, who did not return to Tampa for the ceremony.

&ldquo;We have seen dramatic improvements in the U.S. military relationship with Pakistan, overcoming more than a decade of distrust and estrangement (during that time),&rdquo; Gates said.

Petraeus steered the Iraq drawdown and improved U.S. relations with other countries, he noted.

&ldquo;We also saw a robust effort to build the counterterrorism capabilities of the Yemeni government, in order to prevent that country from becoming a safe haven and base of operations for al-Qaida,&rdquo; Gates said.

Mattis will carry on that preventive mission to build regional trust, he said.

Speaking to the troops who serve in CENTCOM, Mattis said, &ldquo;No one has a crystal ball. I know you will be ready &mdash; operationally, intellectually and morally &mdash; and able to take the shocks in stride when the test comes.&rdquo;