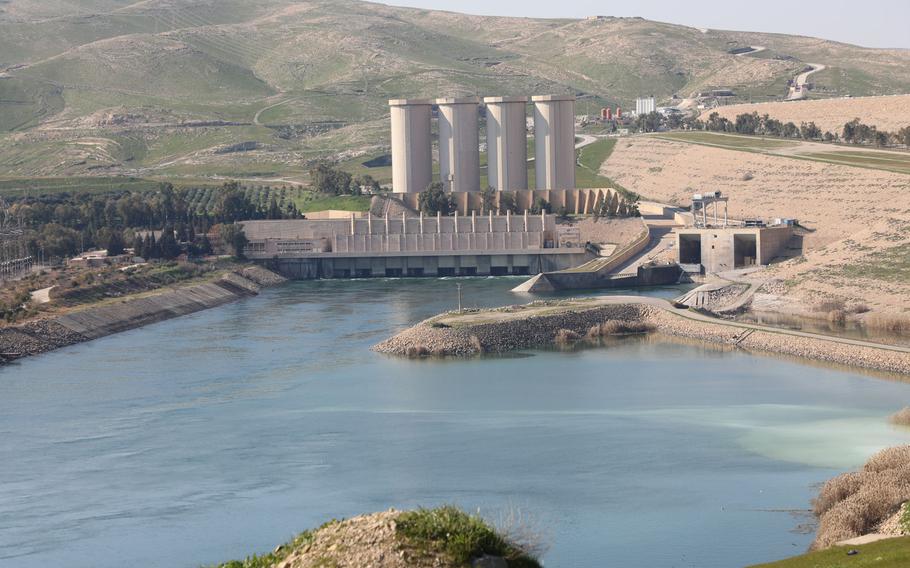 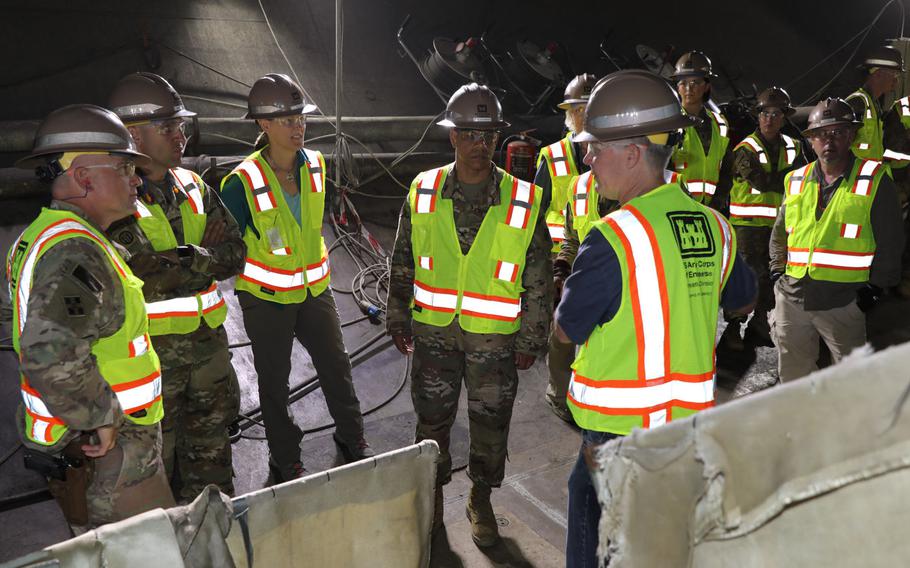 Members of the U.S. Corps of Engineers Transatlantic Division leadership team and members of the Mosul Dam Task Force take a tour inside the outlet tunnels at Mosul Dam, outside the City of Mosul in Iraq, on June 14, 2019. There are two bottom outlet tunnels at the dam, each measuring approximately 33 feet in diameter, which is large enough to build a three-story house inside. (U.S. Army Corps of Engineers)

The Islamic State group’s occupation of Iraq’s largest dam lasted just two weeks in 2014, but it prompted warnings that the structure was at risk of a collapse that could lead to death and destruction throughout the region.

Last week, officials said Mosul Dam was “standing strong” despite record rainfalls, as Iraqi, U.S. and Italian officials celebrated the completion of a $530-million project to shore-up the 2.2-mile-long structure. The dam holds back some 32 billion gallons of water about 25 miles north of one of the country’s largest cities.

“Mosul Dam will forever stand as an example of what nations working together for a common cause can accomplish,” said Matthew H. Tueller, the new U.S. ambassador to Iraq, at a ceremony last Friday.

Washington paid nearly $125 million for the U.S. Army Corps of Engineers to provide engineering work and technical advice, alongside the Italian firm Trevi S.p.A., which the Iraqi government paid nearly $410 million for rehabilitation work, the U.S. Embassy said in a statement.

But while the work has stabilized the dam, construction flaws that have posed a threat since its completion in 1984 have yet to be permanently fixed, a research paper published in April said.

Originally known as Saddam Dam, the facility provides flood protection, hydropower, irrigation and water supply to Iraqis downstream. But it was built over beds of a water-soluble mineral called gypsum, which could be washed away without a continuous injection of a cement and clay mixture deep into the ground below — a process known as “grouting.”

Since 2016, about 40,000 cubic meters of cement — nearly enough to fill the U.S. Capitol rotunda — has been pumped into the dam’s foundation to slow its erosion. The Iraqis have poured about three times that amount of cement into the dam since 1991.

When ISIS briefly overran the site in August 2014, the militants damaged equipment, looted supplies and forced a halt to grouting operations for months.

Less than a year later, Mosul Dam was at “extreme and unprecedentedly high” risk of failure, said the April research paper, published in the Journal of Civil Engineering and Architecture. The precarious conditions led to it being dubbed “the most dangerous dam in the world,” said the paper, whose lead author Nasrat Adamo served for decades as a senior official in the Iraqi ministry that oversaw the country’s dams.

“It was my concern since we started the first shovel,” Adamo told Stars and Stripes Friday by phone, speaking of the dam’s ground-breaking ceremony in 1981. Over the years, he’s written 17 research papers and a 400-page book about the dam and its flaws.

If erosion were to undermine the 371-foot-tall dam, its collapse could send an 80-foot-high torrent of water down the Tigris River Valley. It would engulf parts of Mosul, about 25 miles away, within a few hours, and Baghdad, which is around 210 miles further south, would be flooded in a matter of days.

The U.S. warned that 1.5 million Iraqis could be killed in the floodwaters, and a 2016 study estimated that more than 6 million people across some 2,700 square miles of territory could be affected.

Fearing a disaster, and pressured by America, Baghdad sought international assistance in 2016, as U.S.-backed Iraqi and Kurdish forces prepared to retake Mosul from the militants.

The USACE mission began in September of that year, and more than 85 civilians and military personnel have deployed to support the stabilization effort. Last week, several of the soldiers involved were awarded Army Commendation Medals for their contributions.

A contingent of about 500 Italian troops provided security for the site and training for Iraqi security forces. The last of the USACE team is set to leave Iraq in a matter of weeks, the corps said, and the Italian firm, Trevi, is expected to depart next month.

Hundreds of sensors now monitor the dam and inform officials of vulnerabilities. The international project has built three grout-mixing plants, installed sophisticated technology including a computerized grouting system, bought modern drilling and grouting equipment, and stocked the warehouse with spare parts and materials. More than 250 Iraqi workers were trained on the new equipment and processes.

“The United States [Army] Corps of Engineers has done an excellent job,” Adamo said. “Really, they saved Iraq, as far as the dam is concerned.”

Mosul Dam is safe for the moment, but even with grouting “from now till eternity,” it will continue to pose a threat, he said, calling for Iraq to come up with disaster plans and an early warning system to prevent mass casualties if the dam with the “stupid [expletive] foundation” fails.