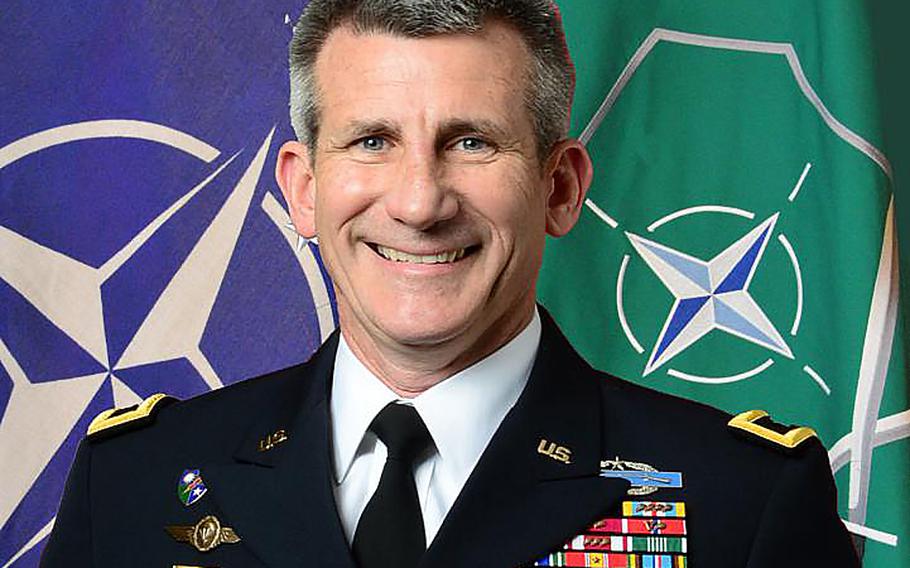 WASHINGTON — President Barack Obama’s pick to lead American war efforts in Afghanistan is a battle-hardened leader from a long line of military servicemembers.

Army Lt. Gen. John W. “Mick” Nicholson Jr. has spent more time focusing on the nearly 15-year-old conflict in Afghanistan than any other U.S. military general. It is an important advantage as American leaders consider the posture of the future force in that country amid mounting concerns about whether Afghan National Security Forces can thwart a resurgent Taliban and other terror threats.

If confirmed by the Senate, Nicholson would replace Army Gen. John F. Campbell as the top U.S. commander in Afghanistan, Pentagon Press Secretary Peter Cook said Wednesday. Nicholson, who has served about 3 1/2 years in Afghanistan, would receive a fourth star and likely take command of U.S. Forces Afghanistan and NATO’s Resolute Support mission in March.

“Since 9/11, the U.S. campaign in Afghanistan has largely defined my service,” Nicholson told members of the Senate Armed Services Committee on Thursday during his nomination hearing. “I’ve either been deployed to Afghanistan or supported the effort from various duty positions in the United States and Europe.”

Nicholson, 58, is a 1982 West Point graduate who earned a Bronze Star with “V” device for valor as an infantry officer during the invasion of Grenada in 1983. His father and uncle are veterans of the Vietnam War who had prominent careers in public service. His father, retired Army Brig. Gen. John Nicholson, served as undersecretary for memorial affairs in the Veterans Affairs Department. His uncle, retired Army Col. Jim Nicholson, served as VA secretary under President George W. Bush.

Pentagon and Armed Services committee members praised Nicholson’s nomination, including Sen. Mark Kirk, R-Ill., who served under his command as a Naval Reserve officer during tours in Afghanistan.

“There is no officer who has as much experience (in Afghanistan) in the U.S. military than he does,” Kirk said, adding Nicholson received Kirk’s “highest recommendation.”

Nicholson served three tours in Afghanistan between 2006 and 2012. Most recently, he served from December 2010 through January 2012 as the chief deputy to the commander of U.S. and NATO forces. Earlier, he served as a one-star general in the country’s southern region and a 16-month tour commanding a brigade in Afghanistan’s volatile eastern region. Additionally, Nicholson spent 14 months as the director of the Joint Chiefs of Staff’s Pakistan-Afghanistan Coordination Cell at the Pentagon.

Cook, reading a statement from Defense Secretary Ash Carter, called Nicholson “an accomplished soldier with extensive command experience both in Afghanistan and around the world.”

Nicholson now serves as the commander of NATO's Allied Land Command in Izmir, Turkey, and has served previously in the elite 75th Ranger Regiment and commanded the 82nd Airborne Division

“He knows what it means to lead a responsive and nimble force and how to build the capacity of our partners to respond to immediate and long-term threats and remain adaptable to evolving challenges,” Cook read from Carter’s statement.

Carter’s statement acknowledged Nicholson will face challenges, but it credited Campbell with working closely with the Afghan government and the country’s security forces to increase their abilities.

Campbell, 58, has led U.S. and NATO operations in the country since August 2014. It was not immediately clear whether Campbell would be assigned another post or retire.

“Gen. Campbell has given his all to the mission as our top commander in Afghanistan, and his personal sacrifices on behalf of his troops and the Afghan people will be remembered by us all,” Cook read. “… He has consistently identified ways to increase the capability and capacity of the Afghan forces, forces that have shown the motivation and resiliency required to assure the long-term success of our partnership and the security and the stability of the Afghan people deserve.”

During his nomination hearing Thursday, Nicholson acknowledged the security situation has “deteriorated” in Afghanistan since the United States ended its major combat role there at the end of 2014, putting the Afghan forces in the lead against the Taliban.

Last year, the Taliban did retake some land from Afghan forces, briefly capturing the city of Kunduz in northern Afghanistan in October and more recently parts of the Helmand Province in the country’s south where fighting has continued. But Afghan forces have improved in several areas including aviation. In recent weeks, the country’s first A-29 Super Tucano light attack aircraft arrived to allow pilots to fly close air support missions. Those capabilities would still take “some time” for the Afghans to master, Nicholson said.

Armed Services committee members questioned whether the United States was doing enough to ensure success in Afghanistan where there is a plan to reduce American troops by 40 percent by 2016’s end.

Sen. John McCain, R-Ariz., said 5,500 American troops would not be enough to train and advise the Afghan forces and conduct counterterrorism operations against the remnants of Al-Qaida and the growing threat of the Islamic State group in the country’s east.

“Conditions on the ground in Afghanistan today clearly demand an immediate re-evaluation of scheduled American troop withdrawals,” said McCain, the committee’s chairman. “This administration’s continued adherence to a calendar-based withdrawal, rather than a conditions-based withdrawal, which some of us have been urging for many years … will be adequate for one or the other of these critical tasks, but not both.”

Campbell has called for the United States to maintain its 9,800 troops in Afghanistan at least through the end of the year. Nicholson said he agreed with that assessment, but he reserved judgement on the pace of troop removals until he’d had time in country, likely within 90 days, to make his own assessments.

Cook said Wednesday that there is no plan in place to alter that force reduction scheduled to occur gradually during the next 11 months. However, Obama has shown a willingness in the past to change course.

“We’re going to continue to assess the security situation in Afghanistan, and (Carter) is going to continue to listen very carefully to Gen. Campbell on his assessment of what’s happening in Afghanistan, but, as of now, there’s no change to that plan,” Cook said. “If there needs to be a review or reassessment that will be done with the coordination of commanders on the ground, of course, and with the secretary engaging with the national security team at the White House, as well.”