Army captain died during Skype chat with wife from Afghanistan 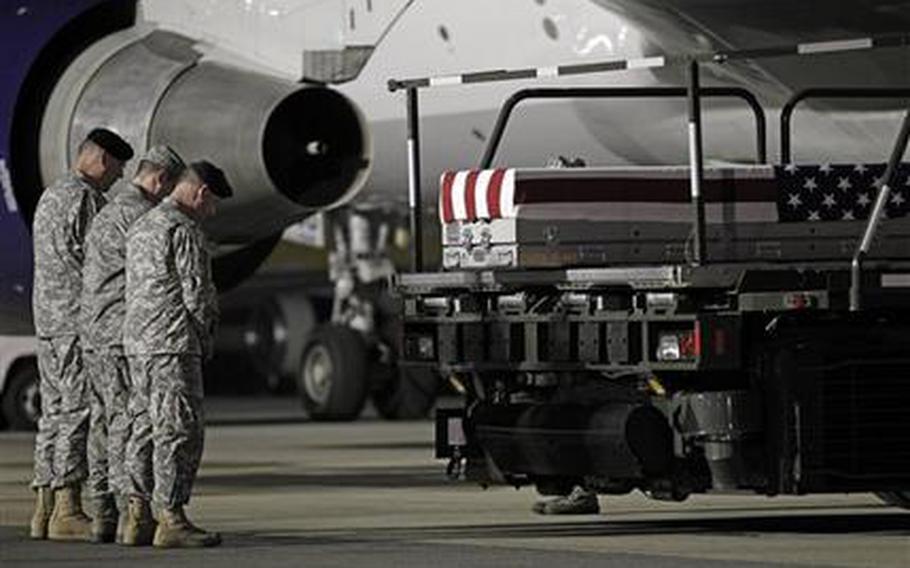 Chaplain Col. Dennis Goodwin, left, directs a prayer over the transfer case containing the remains of Army Capt. Bruce K. Clark of Spencerport, N.Y., upon arrival at Dover Air Force Base, Del. on Thursday May 3, 2012. The Department of Defense announced the death of Clark who was supporting Operation Enduring Freedom in Afghanistan. (AP Photo/Jose Luis Magana)

WASHINGTON &mdash; An Army clinical staff nurse died Monday in Afghanistan as he was video chatting with his wife.

Capt. Bruce Kevin Clark, 43, of Spencerport, N.Y., died of natural causes, according to a spokeswoman at Beaumont Army Medical Center in Texas, where Clark was based.

Army officials are waiting for the results of an autopsy to determine the cause of death, but it was not combat related, the spokeswoman said.

&ldquo;Bruce&rsquo;s wife tragically witnessed her husband&rsquo;s death during one of their regular Skype video chats on Monday,&rdquo; Clark&rsquo;s brother-in-law, Bradley Taber-Thomas, said in a statement on Friday. &ldquo;At the time of the incident, the family was hoping for a rescue and miracle, but later learned that it was not to be.&rdquo;

Clark is survived by his wife and two daughters.

He deployed with the 566th Air Support Medical Company in March, according to an Army news release. He joined the Army in September 2006 and was previously stationed at Tripler Army Medical Center in Hawaii.

Taber-Thomas said that Clark&rsquo;s body was returned Thursday to Dover Air Force Base in Delaware.

&ldquo;Although the circumstances were unimaginable, Bruce&rsquo;s wife and extended family will be forever thankful that he and his wife were together in his last moments,&rdquo; Taber-Thomas said.