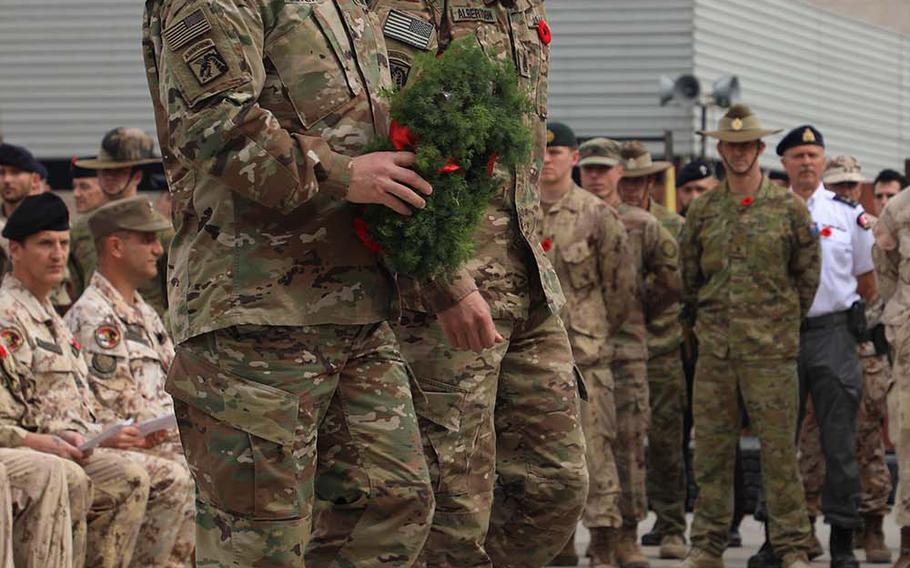 U.S. Army Lt. Gen. Paul LaCamera, left, commander of the 18th Airborne Corps and Combined Joint Task Force - Operation Inherent Resolve (CJTF-OIR), and Command Sgt. Maj. Charles Albertson walk towards the center of the ceremony with a wreath to be placed on a centerpiece at the Armistice Ceremony at Union III, Baghdad on Nov. 11, 2018. ( Phillip McTaggart/U.S. Army)

Coalition troops in Baghdad paused for a two-minute silence Sunday morning to mark the centenary of the end of World War I in Europe, which coincides with the U.S. Veterans Day and the British Remembrance Day holidays.

The hostilities of the war, which also was fought in what is modern-day Iraq and redrew the borders in the Middle East, ended in 1918 at the 11th hour of the 11th day of the 11th month, according to an armistice signed that day.

“Being in Baghdad on (the anniversary) is something rather special because we are in a city which was a theater of war (100 years ago) … and we are on operational duty ourselves,” said British Maj. Gen. Christopher Ghika, deputy commander of Operation Inherent Resolve, in a phone interview ahead of the ceremony. “It’s unlikely to happen to any of us again.”

The WWI campaign in what was called Mesopotamia, fought mainly between forces of the British and Ottoman empires, ended on Nov. 14, 1918, but its ramifications are still evident today, especially in the Middle East.

A century on, dozens of nations that had been on opposite sides in that war are united in the region as a coalition in the anti-Islamic State campaign. The international alliance is made up of 74 nations and five international organizations.

“Whatever side they were on in the First World War, they’re members of the coalition,” Ghika said. “We are all united under one imperative, which is to see the lasting defeat of ISIS.”

Veterans Day honors all who have served in the armed forces, whereas Remembrance Day, like Memorial Day in the U.S., honors all servicemembers who have died in the line of duty. Both holidays originated to mark the WWI armistice. The war officially ended with the signing of the Treaty of Versailles in June 1919.

During Sunday’s ceremony, the coalition’s senior leaders laid wreaths to honor all fallen troops, including 39 coalition servicemembers who have died fighting ISIS.

“Their willingness to put themselves in harm’s way, while serving on the frontiers of freedom and for the benefit of all mankind, is not forgotten,” said Lt. Gen. Paul J. LaCamera, the coalition’s commanding general. “Looking across the audience today, I see the many uniforms and patches that make up our coalition – and it is astounding to me.”

Ghika called on the gathering to remember not just those who have died, but to “draw into sharp focus the cost of war, the impact on nations, the cost to nations, that evil must be confronted and the opportunity that every generation has to improve on what has gone before.”

Called “the war to end all wars,” WWI was an especially traumatizing conflict, but its end did not bring about the lasting peace many had hoped for in the century since. The war saw the advent of increasingly deadly weapons and its aftermath led to the parceling of swaths of Middle Eastern territory that for many remains contentious.

Modern-day Syria and Iraq, where forces are embattled today, are among the Great War’s legacies, created as the victors carved up the Ottoman Empire’s territory in the years afterward. Lebanon and Syria came under French rule, while Cyprus, Egypt and Sudan became colonies of the British Empire and Iraq and Palestine were declared British Mandates.

The postwar process of redrawing the region’s borders has fueled continuing conflicts.

ISIS has claimed it seeks to reverse the effects of the Sykes-Picot Agreement, a secret pact between Britain and France during the war to divide their spheres of influence in the Middle East upon the defeat of the Ottoman Empire.

That an independent Kurdistan was not created after the war remains a source of tension in the region, most notably in Turkey and Iraq, where sizable Kurdish populations have sought secession — sometimes distracting from the anti-ISIS fight in recent years.

Last year in Iraq, Kurdish fighters and federal troops clashed after the northern Kurds voted to break away from Baghdad, leading to months of negotiations to tamp down tensions. In Syria, the largely Kurdish forces partnered with the U.S.-led coalition have left the battlefield in recent months to fight Turkish forces who view them as terrorists.

Coalition forces continue to train Iraqi forces while building up the country’s defensive capabilities, but the Pentagon’s Inspector General said earlier this month that defense officials believe Iraqi forces are “years, if not decades” from being able to operate without coalition support.

Meanwhile, ISIS has lost all of the territory it once held in Iraq and controls only an estimated 1 percent of what it once held in Syria. The terrorist group operates both as a conventional force and as an insurgency, and in Iraq has continued to attack security forces and to assassinate local political and tribal leaders, intimidating the population and undermining confidence in security forces, the IG reported.

Also on Sunday, the coalition announced a series of operations targeting ISIS militants in Iraq in recent weeks.

The leaders had been responsible for overseeing operations in Salah al Din, Kirkuk, Nineveh and northern Anbar provinces.

Their followers helped coordinate attacks that injured civilians in Shirqat and Qayyarah, and others that targeted security forces, civilians and infrastructure in Salah ah Din and Kirkuk provinces.

On Oct. 31, an combined Iraqi-and-coalition operation made up of airstrikes and ground attacks killed about 20 ISIS fighters in the Makmuhr Mountains in northern Iraq.

Sunday’s ceremony was an opportunity to pause and to reflect on those that have died, and to commemorate their sacrifice, Ghika said, “and then we go back to the fight.”