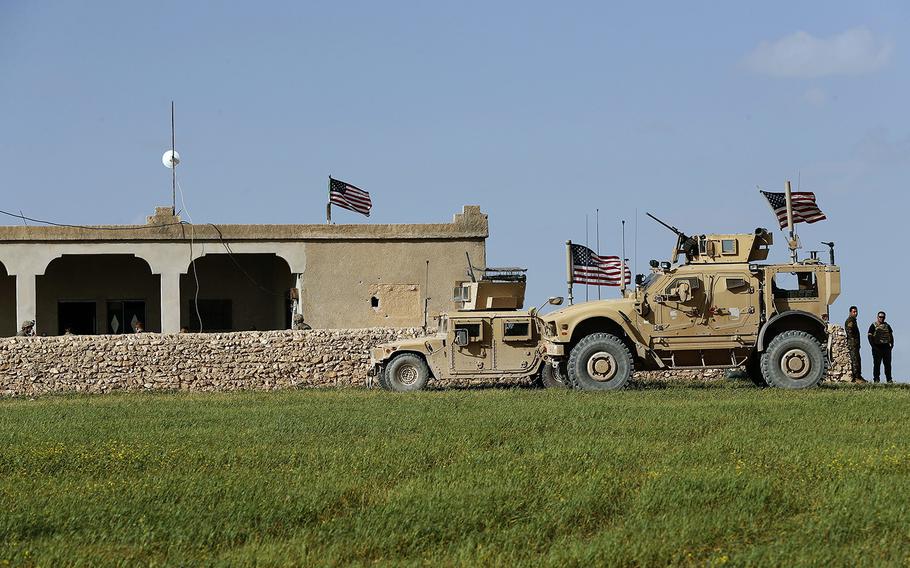 U.S. soldiers sit inside a house-turned-into-outpost at left on a road leading to a front line between U.S-backed Syrian Manbij Military Council fighters and Turkish-backed fighters, at Halawanji village, north of Manbij town, Syria, on Thursday March 29, 2018. (Hussein Malla/AP)

An improvised explosive device blast in Syria killed one American servicemember and one U.K. servicemember with the U.S.-led anti-Islamic State coalition and wounded five others late Thursday, according to military officials.

The wounded were immediately treated and were being evacuated for further medical care, according to an Operation Inherent Resolve statement Friday. The condition of the wounded troops was not immediately clear.

A U.S. defense official confirmed Friday that a U.S. servicemember was killed in the blast, however the official would not confirm the nationality of the other individual killed in the explosion. The official spoke on the condition of anonymity to disclose information not authorized for public release.

In an emailed statement, the U.K. Defense Ministry said one of its servicemembers, embedded with U.S. forces in a counter-ISIS mission, was also killed in the blast. It’s the U.K.’s first combat death in the anti-ISIS fight.

“The family has been notified and our thoughts are with them at this difficult time,” the statement said. “We cannot confirm any further details at this stage.”

Additional details of the incident were being withheld pending an investigation, according to the coalition. The Pentagon typically withholds the names of servicemembers killed in action for 24 hours after family notification.

Neither the two statements nor the official identified where the incident occurred. But it came hours after The Associated Press reported a local Syrian official had said a roadside bomb went off in Manbij, an Arab-Kurdish town not far from the border with Turkey, where U.S. troops patrol alongside their allies and are based nearby.

Mohammed Abu Adel, leader of the Manbij Military Council, a US.-backed Arab-Kurdish group in Manbij, told the AP that the bomb went off just before midnight on Thursday, hundreds of meters from a security headquarters that houses the council.

After defeating Kurdish fighters and taking control of Afrin, a Syrian town 60 miles west, Turkey has threatened to march on Manbij and take it from the Kurds. Ankara views the Kurdish YPG militia — the U.S. ally in the anti-ISIS fight — as terrorists and part of an insurgent group that operates inside Turkey.

The mixed Arab and Kurdish town of about 400,000 people was liberated from ISIS in the summer of 2016 with the help of coalition airstrikes and has been controlled by the U.S.-backed military council since then. In recent weeks, it has also been the site of several small blasts, protests and an assassination attempt on a military council member.

Local officials blame Turkey and other adversaries for seeking to sow chaos there.

The United States has maintained a small element of troops in and around Manbij since the city's liberation. It has been the site of small-scale skirmishes between YPG forces and Syrian militia supporting Turkey since then.

The coalition to defeat ISIS is made up of more than 75 members, but only about two dozen have committed troops to the mission, including about 2,000 U.S. forces in Syria and 5,200 in Iraq, according to Department of Defense figures released in December. Since then, some troops and equipment have been shifted to support operations in Afghanistan, as the battle against ISIS has been winding down and shifting to stabilization efforts.

However, the terrorist group continues to carry out deadly attacks in the region, including recent incidents in Iraq, where insurgents set up checkpoints disguised as security forces, allowing them to ambush Iraqi troops.

In Syria, with the fight against ISIS waning, America’s Kurdish and Turkish allies are fighting each other, while the Kurds and the coalition forces backing them are in a deadlock with the Syrian government and its backers — Russia and Iran — in the country’s seven-year civil war.

It’s not yet clear who is responsible for the fatal bombing this week, which caused the first deaths from hostile action for the coalition, including the United States, in Iraq or Syria this year. The American killed was at least the fourth in Syria since the anti-ISIS campaign began in late 2014.

It came as President Donald Trump, speaking Thursday at an event in Ohio, said the United States would be “coming out of Syria like very soon.”

State Department and Pentagon officials on Friday declined to confirm the president’s assertion, directing questions to the White House.

Pentagon spokeswoman Dana White said Thursday that the U.S. and coalition’s mission in Syria “has not changed.

“The coalition remains committed to the lasting defeat of ISIS,” White told reporters, warning Turkey’s actions against the Kurds in northern Iraq were impacting that fight.

U.S. officials have said operations against ISIS in southeastern Syria have stalled and the terrorist group retains a small amount of land along the Euphrates River.

Twelve coalition servicemembers had died in noncombat incidents while supporting the anti-ISIS fight in Iraq and Syria this year, before the bomb blast Thursday. That included seven Air Force personnel killed earlier this month in a helicopter crash in western Iraq, near the Syrian border. A Scottish soldier was killed in an accident in Iraq in January.