American defense contractor killed, troops wounded in rocket attack on base in Kirkuk 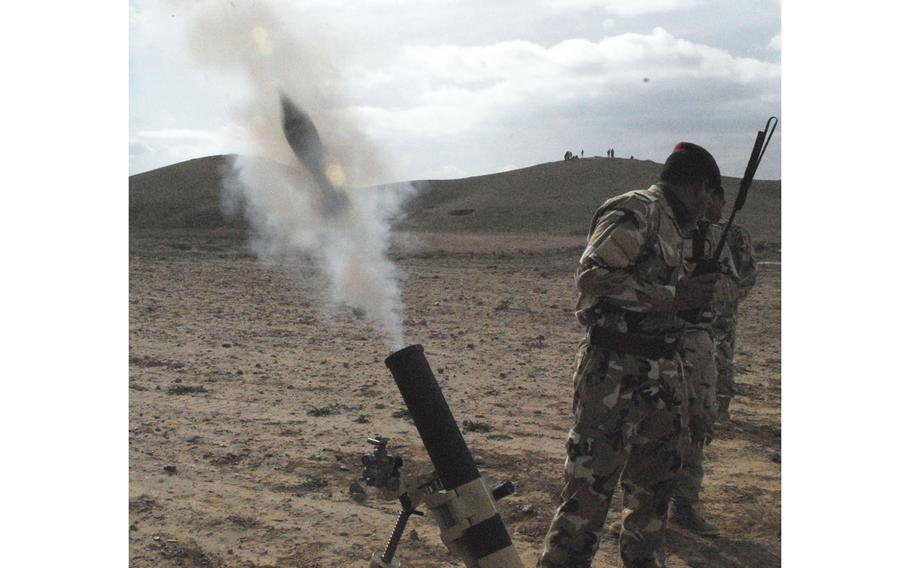 Iraqi army soldiers fire mortars during a live-fire exercise on Jan. 25, 2010, at K1 Base outside of Kirkuk, Iraq. A U.S. contractor was killed and other American and Iraqi service members were wounded Friday evening in a rocket attack at K1. (Jessica Luhrs-Stabile/U.S. Army)

IRBIL, Iraq — A U.S. contractor was killed and American and Iraqi service members were wounded Friday evening in a rocket attack that struck a coalition base in northern Iraq, the U.S. military said.

The rocket strike on the K1 base in Kirkuk occurred about 7:20 p.m., the U.S.-led coalition to defeat the Islamic State group said in an emailed statement that contained few other details.

Information about the service members wounded in the attack or the severity of their injuries was not included.

At least 30 107mm rockets are believed to have hit the base, said one official who was not authorized to speak officially on the matter and declined to be named. Some struck an area where munitions were stored, apparently setting off secondary explosions, the official said, citing early reports from the base.

The rockets struck as a major Iraqi mission was preparing to get underway, the official said.

The Iraqi government’s security information cell, in a statement posted to Facebook, confirmed “a number of missiles” fell inside the base and said more details would be provided later.

The death and injuries appear to be the first U.S. casualties from the sporadic rocket strikes on bases housing U.S. troops that began earlier this year and which U.S. officials have blamed on Iran-backed groups amid mounting tensions between Washington and Tehran.

The latest strike comes a little more than a week after Defense Secretary Mark Esper called on Iraqi Prime Minister Adel Abdul Mahdi to help stop rocket attacks targeting bases where U.S. troops are housed, amid an uptick in such attacks.

No group had publicly claimed responsibility for the latest attack, but it resembles a spate of similar rocket strikes that officials have blamed on Shiite militias linked to Iran. Officials have repeatedly warned that those groups are a threat to U.S. forces.

The U.S. was looking into whether Kataib Hezbollah, one of the Iran-backed Shiite militia groups, was possibly involved in Friday’s attack, an unnamed official told Reuters.

Any attacks by Iran or their proxies that harm American troops, allies or interests “will be answered with a decisive U.S. response,” Pompeo warned.

In light of the threat from those groups, some of which fought American forces after the 2003 invasion, U.S. troops have curtailed some operations in Iraq in recent months, officials have said.

ISIS, which remains active near Kirkuk, has also reportedly targeted security forces in the area in recent weeks. The group claimed responsibility for a roadside bomb blast in Kirkuk last month that wounded two Kurdish military members, known as peshmerga, and five coalition troops from Italy.

The group has turned to insurgent tactics since they were routed from their last stronghold in Iraq in 2017, and often hides in the Hamrin mountains, a rugged range that extends across part of Kirkuk province, said U.S. military officials who assist Iraqi anti-ISIS missions with intelligence and other support.

They also exploit a security gap along the disputed border between the Kurdistan region in the north and the federal government of Iraq to the south, which spans the Qara Chokh mountains, a forbidding range northwest of Kirkuk near the town of Makhmour, making operations to hunt them down very challenging, officials said.

While Iraqi forces routinely conduct small-scale operations against ISIS throughout the country, they launch increasingly complex and larger operations as part of the “Will of Victory” campaign about monthly, U.S. officials told Stars and Stripes this week. The strike at K1 appears have come as forces prepared for the latest phase of that campaign.

The base houses U.S. forces, as well as Iraqi Federal Police and Counter-Terrorism Service troops.

Attacks on Iraqi bases housing U.S. troops have reportedly increased since a Nov. 8 attack that hit Qayara Airfield West, a base south of Mosul, with a barrage of more than 30 rockets. No one was wounded in that strike, but several Iraqis were wounded in subsequent incidents at other bases where U.S. troops are housed.

The rise in rocket attacks comes amid escalating tensions over hard-hitting sanctions imposed by the Trump administration after it backed out of a nuclear deal with Iran negotiated under President Barack Obama’s tenure.

As U.S. officials warned of increased threat indicators from Iran in May, the U.S. drew down much of its diplomatic staff in Baghdad, just days before a rocket impacted inside the diplomatic area of the city but left no one injured.

Outside Iraq, meanwhile, the U.S. has blamed Iran or its agents for a number of attacks on shipping vessels in the Persian Gulf and on a Saudi oil field, as well as shoot-downs or attempted downing of U.S. drones.

The Pentagon responded by deploying thousands more troops to the region.

During about the same time, several mysterious airstrikes struck bases used by Iran-backed militias in Iraq. The U.S. also downed an Iranian drone in the Gulf this summer after it reportedly flew too close to a Navy warship.

Initial reports suggest some similarities between the K1 attack and the strike on the Qayara airfield, known as Q-West, last month.

In the Q-West attack, the rockets were fired from a “sophisticated system” on a truck parked about two-thirds of a mile from a camp used by a Shiite militia group, a military official at the base told Stars and Stripes this week. It was previously reported to be a Katyusha also.

Iran-backed groups, however, are not likely the only ones with access to such weapons, and the Iraqi defense ministry had blamed the Q-West attack on “terrorist elements.”

In response to that attack, U.S. Army Howitzers at Q-West returned fire on the rocket truck, officials said.

In Friday’s incident, Iraqi security forces were leading the response and investigation, the U.S.-led coalition said in a statement.