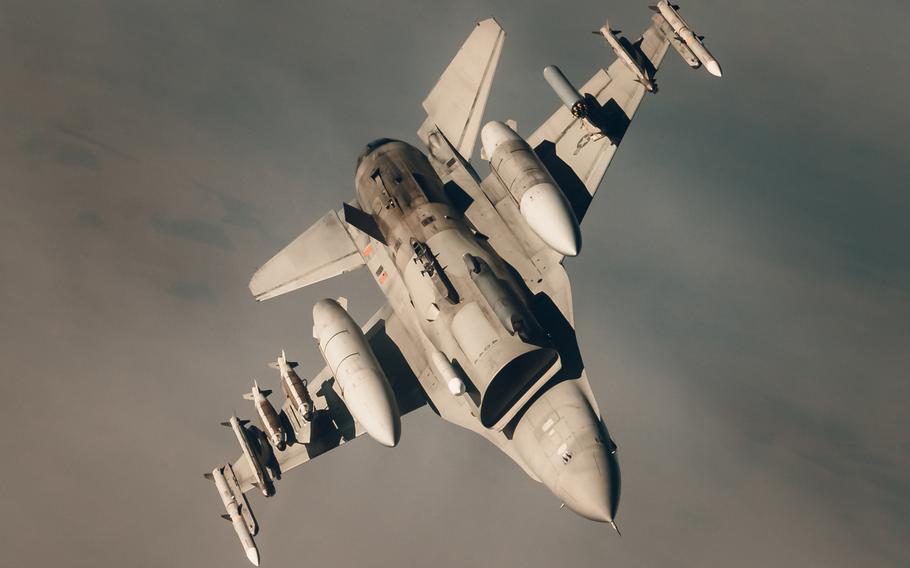 The U.S.-led coalition against the Islamic State has conducted more airstrikes in Iraq this month than it did all of last year, destroying scores of enemy positions and killing dozens of terrorists.

Coalition jets carried out over 150 strikes against ISIS fighters in the mountains south of Mosul this month, U.S. and Iraqi military officials said earlier this week. An analysis of previous coalition strike data shows fewer than 120 airstrikes were carried out against ISIS in Iraq all of last year.

Including Iraqi air force and army aviation operations, a total of 312 airstrikes have destroyed 120 enemy positions and killed 27 terrorists, Col. Wayne Marotto, a spokesman for the military coalition, said in a tweet Wednesday.

“The mission was to destroy Daesh hiding out in some tough terrain of caves and tunnels, ostensibly the last redoubt of the so-called caliphate,” Marotto said in an email, using an Arabic term for ISIS.

The new data were released ahead of the latest round of talks between Baghdad and Washington about continued cooperation.

“The meetings will further clarify that coalition forces are in Iraq at the invitation of the Iraqi government and solely for the purpose of training and advising Iraqi forces to ensure that ISIS cannot reconstitute,” White House press secretary Jen Psaki said at a briefing Wednesday. “We are committed, first and foremost, to Iraqi sovereignty.”

A first round of the “strategic dialogue” was held last year amid high tensions after a series of attacks between Washington and Tehran since late 2019 that have played out largely on Iraqi soil, including a drone strike outside the Baghdad airport that killed Maj. Gen. Qassem Soleimani, head of Iran’s elite Quds Force, a U.S.-designated a terrorist organization.

In the wake of the assassination, Iraqi lawmakers called for U.S. and coalition forces to leave the country. The Pentagon roughly halved its troop strength in the ensuing months, closing several bases and consolidating forces onto a few larger installations.

Rocket attacks, which the Pentagon has blamed on Iran-backed Shiite militias, continue to target diplomatic areas and military bases housing U.S. forces and other American personnel.

But since the group was ousted from the last of its territorial holdings, coalition and Iraqi forces have been sweeping the deserts and mountains where insurgents are holding out.

The coalition strikes this month were part of Operation Ready Lion, which began March 9 in a rugged mountain range near an internal border between areas controlled by the Iraqi federal government and others in the Kurdish region. During the “first of its kind” operation, Iraqi counterterrorism snipers have been watching caves in hard-to-reach, high-elevation areas, where ISIS fighters have been hiding out, Iraqi Defense Ministry spokesman Yehia Rasool said in a series of translated tweets Wednesday.

The strikes “caused their killing and fleeing,” Rasool wrote. “They received the fire of truth from the anti-terror snipers, which prompted ISIS members to announce their surrender to our brave men.”

On Tuesday, Marotto shared one of Rasool’s tweets that said coalition jets had carried out 133 strikes in the first 10 days of the operation. On Tuesday, coalition jets conducted “another 18 precision airstrikes pummeling 39 Daesh dwellings,” Marotto said.