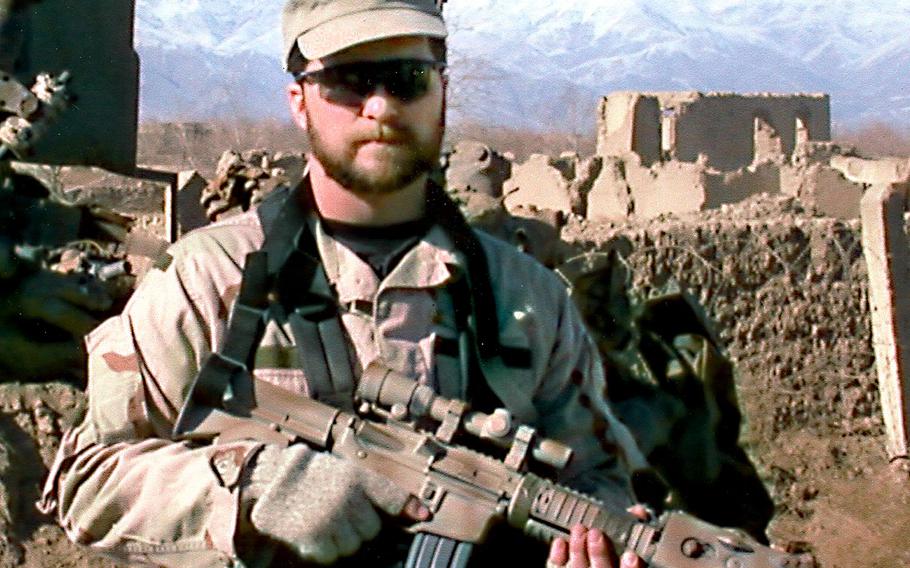 Air Force Tech. Sgt. John A. Chapman, a combat controller, was killed during a fierce battle against al Qaida fighters in Takur Ghar, Afghanistan, March 4, 2002. He will be posthumously awarded the Medal of Honor (U.S. Air Force)

Newly released overhead surveillance footage shows the final moments of Tech Sgt. John Chapman, an Air Force combat controller, who will receive the Medal of Honor this month for his bravery during one of the Afghanistan War’s early battles.

Chapman received the Air Force Cross posthumously for his actions on Roberts Ridge in March 2002, as part of an elite special operations team charged with locating and targeting al-Qaida fighters entrenched on Takur Ghar mountain in eastern Afghanistan along the Pakistan border. President Donald Trump will present the upgraded award – the nation’s highest military honor -- to Chapman’s spouse, Valerie Nessel, on Aug. 22. The award is at least partially the result of new drone footage, officials said.

Chapman will become the first airman to receive the Medal of Honor since the Vietnam War, and just the 19th in the service’s history.

In the newly released 1.5-minute Air Force video, a figure identified as Chapman can be seen charging up a steep slope toward enemy positions atop the 10,000-foot peak, after a Chinook helicopter inserts him and six Navy SEAL team members to recover their teammate, Petty Officer 1st Class Neil Roberts, who had fallen from the back of the aircraft after the team came under heavy enemy fire from al-Qaida.

Chapman and SEAL team leader Britt Slabinski teamed up to attack enemy positions. After assaulting the first of two positions, identified as bunkers in the footage, Chapman abandons cover to attack a second position where an enemy machine gun was firing on his team, when he is wounded.

Air Force analysis of the drone footage conducted more than a decade after Chapman’s death indicated the he was unconscious when the SEALs left the battlefield.

The SEALs have long insisted Chapman was dead when they left him, but Slabinski has endorsed Chapman’s nomination for the Medal of Honor. Slabinski, now retired, received the Medal of Honor in May for his actions in the same battle. He told officials that Chapman’s actions ensured the survival of his comrades.

“Despite his wounds, (Tech. Sgt.) Chapman regains his faculties and continues to fight relentlessly,” a caption on the Air Force video says, a time code indicates it’s been more than an hour since he had been wounded.

The caption’s language closely resembles the words used to describe Chapman’s actions in his Medal of Honor citation, according to an Air Force statement last month.

He’s then shown firing on enemy positions until minutes later, when he is shot twice in the chest, as enemy rocket propelled grenades hit an incoming helicopter carrying a quick reaction force.

“Chapman is killed in action,” the video says at this point.