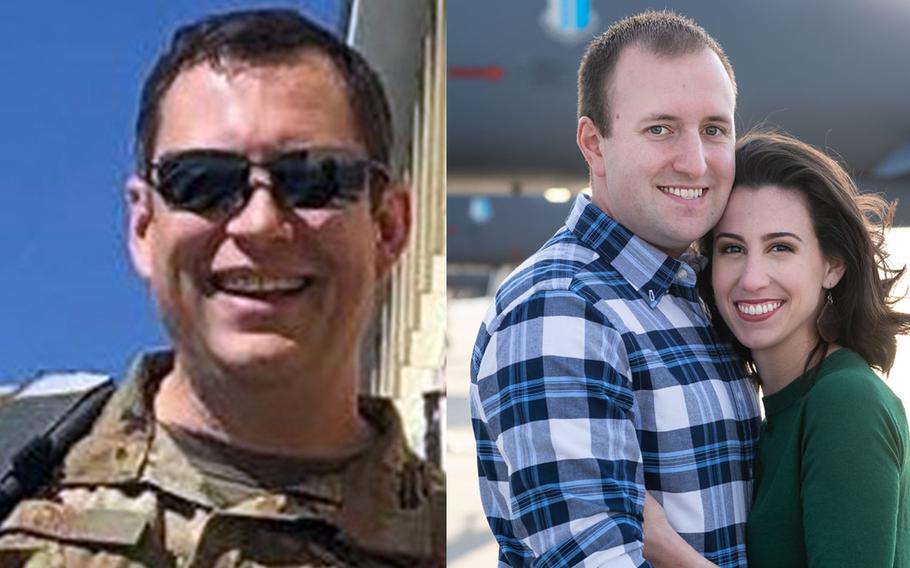 One of two aviators killed Monday when their Bombardier E-11A crashed in Afghanistan was a grass-to-brass lieutenant colonel in his 25th year of Air Force service. The captain he flew beside was an experienced B-1 bomber pilot.

The Pentagon on Wednesday identified the pair as Lt. Col. Paul K. Voss, 46, of Yigo, Guam, and Capt. Ryan S. Phaneuf, 30, of Hudson, N.H. Voss was assigned to Headquarters Air Combat Command at Joint Base Langley-Eustis, Va., and Phaneuf was with the 37th Bomb Squadron at Ellsworth Air Force Base, S.D.

The cause of the crash, which happened in Ghazni province, about 80 miles southwest of Kabul in a Taliban-controlled area of Afghanistan, is under investigation, the Pentagon said in a statement.

Voss and Phaneuf, who were flying in support of Operation Freedom's Sentinel, were the only people aboard the plane, a U.S. defense official said Tuesday on condition of anonymity.

Voss had served 25 years in active duty with the Air Force and was stationed at Joint Base Langley-Eustis for about the past four years, the Air Combat Command said in a statement Wednesday.

Voss began his career as an enlisted airman and was commissioned in 2001 through attendance at the USAF Officer Training School.

He was the chief of the exercises within combat command’s directorate of operations.

“Lt. Col. Paul Voss was our brother and teammate,” Gen Mike Holmes, commander of Air Combat Command, said in the statement. “The men and women of our Air Force knowingly put themselves in harm's way, and I'm thankful for great Americans like them.

“It's really hard to describe how sad we are at the loss of two great Airmen.”

Phaneuf was a B-1 heavy bomber pilot, the 28th Bomb Wing said in a statement Wednesday.

He dreamed of becoming an Air Force pilot and wrote about that goal in his high school yearbook, according to a Wednesday report by ABC affiliate WMUR in Manchester, N.H.

A Hudson police procession carrying Phaneuf’s body will pause in front of Alvirne High School, where he was a member of JROTC before graduating in 2007, at 1 p.m. Thursday.

“This is a tragic loss to the Air Force and our Ellsworth Family,” Col. David Doss, 28th Bomb Wing commander, said in the statement.

U.S. forces arrived at the crash site overnight Monday and no insurgents were then present, Arif Noori, a spokesman for the provincial governor, said Tuesday.

U.S. officials said the plane’s flight recorder was recovered from the crash scene.

The Taliban claimed responsibility for bringing down the aircraft, which is used as a communications platform. However, the Pentagon said there are no indications that the crash was caused by enemy fire.