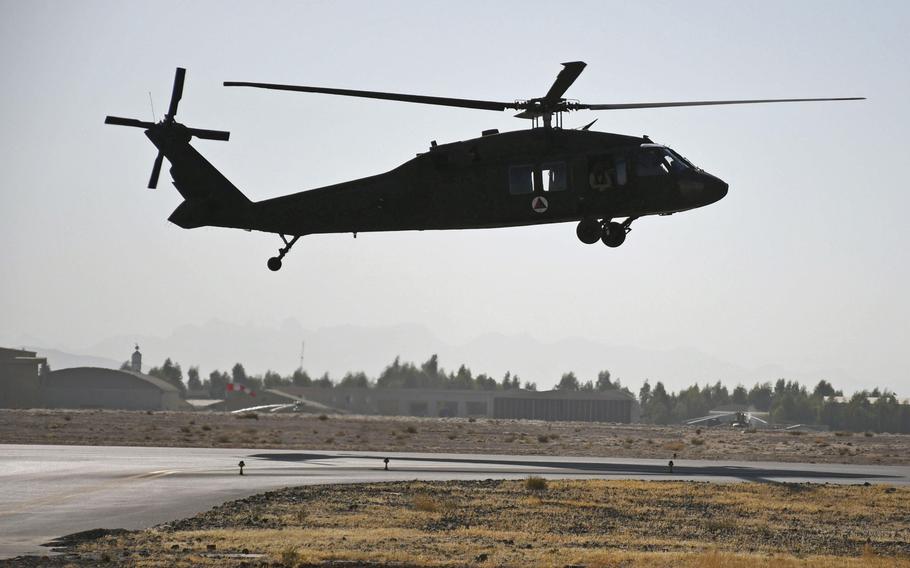 KABUL, Afghanistan — Plans to replace Afghanistan’s aging fleet of Russian helicopters with American-made UH-60 Black Hawks may be unsustainable because of a lack of qualified pilots and engineers, a government watchdog has warned.

The integration of the Black Hawks, a program that is estimated to cost up to $7 billion, is part of an effort to modernize the Afghan air force, which officials say is necessary for the government to be able to fend off enemies without international support. The plan calls for the Afghan air force to receive 159 Black Hawks by 2023. These will replace about 80 aging Russian-built Mi-17 ‘Hip’ helicopters currently in the air force’s inventory.

Less than two years after the Black Hawk program began, it is at least 16 pilots short of plans, the Special Inspector General for Afghanistan Reconstruction said in a report released Tuesday. However, it doesn’t appear the Defense Department has changed the number of aircraft being delivered to the country, which risks wasting U.S. taxpayer dollars, it added.

“Despite the fact that pilot development is not keeping pace, DOD has yet to establish benchmarks it can use to determine whether it should pause deliveries or reduce the number of UH-60s it will deliver to the Afghans, running the risk that the aircraft it delivers will sit idle in Afghanistan without enough pilots to fly them,” SIGAR said.

The watchdog said “unrealistic” English proficiency levels and false assumptions about attrition were partly to blame for the pilot shortage.

There is also a lack of qualified engineers needed to maintain the new aircraft and no training course to teach them, the report said.

“Having insufficient Afghan maintenance personnel limits the locations at which UH-60s can operate because DOD policy bars U.S. contractors from working where there is no U.S. or coalition control due to security concerns,” the report said.

Russian Mi-17s have long formed the backbone of Afghanistan’s air force. Afghan airmen and engineers are familiar with the aircraft and need very little advice from international partners on how to fly and maintain them.

However, as the U.S. primarily bankrolls the Afghan military, sanctions against Russian arms manufacturers have made servicing the Mi-17 fleet increasingly difficult.

Congress agreed to replace the Mi-17 fleet with U.S.-made helicopters, following a Pentagon assessment in 2017 that the Russian helicopters would soon become unsustainable.

When it was first announced, it sparked grumbling among some Afghan pilots who said the Russian helicopters are simpler to maintain and have better “hot-and-high” performance — meaning they can carry more cargo, more troops and operate at higher altitudes — a key consideration in a mountainous country like Afghanistan.

The initial difficulties of transitioning to the Black Hawks documented by SIGAR come amid increasing speculation about a possible pullout of U.S. and coalition forces, and ongoing concerns that the Afghan military would struggle to cope on its own.

The watchdog has called for the improvement of pilot training timetables and English skills, in addition to a program to train Afghan maintenance crews, which would eventually replace foreign contractors.

In a response, the Defense Department said it had “developed a proposed training plan that includes establishing a maintenance development center outside of Afghanistan that will focus specifically on training entry-level UH-60 maintenance personnel.”