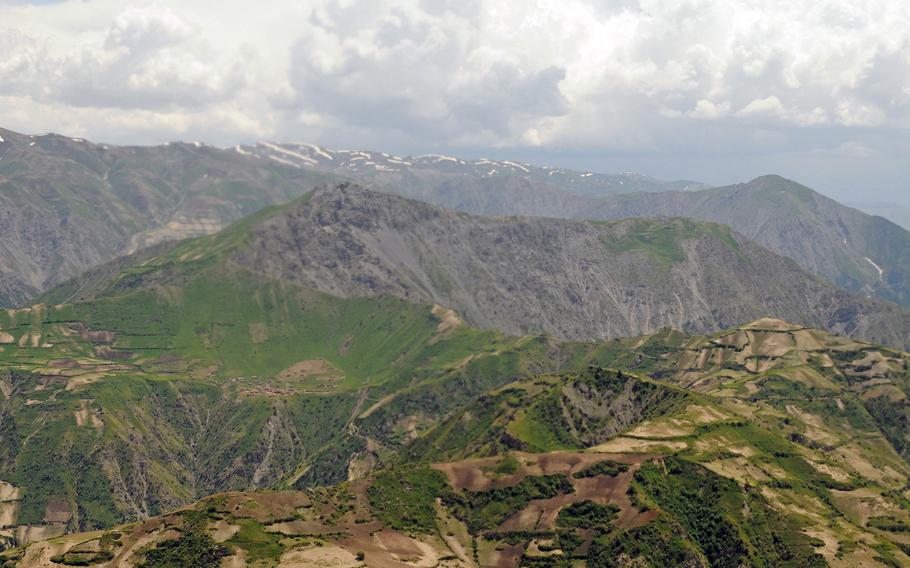 An aerial view June 3, 2012, shows the mountains between Faizabad and Khwahan in Badakhshan province, Afghanistan, an area where Taliban fighters launched a surprise attack on Saturday, June 6, 2015. (Kimberly Bratic/U.S. Army)

KABUL, Afghanistan — Taliban fighters pushed deeper into a remote district in northeastern Afghanistan, as security forces launched a counteroffensive on Sunday to wrest control of the area from the insurgents.

Several hundred Taliban guerrillas seized control of a large part of Yamgan district in Badakhshan province in a lightning strike beginning late Friday, Shah Waliullah Adeeb, the provincial governor said in a telephone interview. Insurgent forces have since taken control of the district center and government compound in Yamgan amid heavy fighting, killing six soldiers during the attack, Adeeb said.

An Interior Ministry statement on Sunday said army and police units were in the midst of a counteroffensive against the insurgents in Yamgan – located about 150 miles from Kabul. "These operations will be intensively continued (until) the district is cleared of the Taliban," it said.

Government troops have killed six insurgents since the beginning of the operation, the statement said.

Army reinforcements from the provincial capital of Faizabad – about 70 miles north of the stricken district -- were called in for the counterattack, Lal Mohammad Ahmadzai, a spokesman for the provincial police chief, said on Saturday.

This is the third major operation carried out by Afghan troops in the north of the country in as many months. Government forces successfully took back Taliban-held territory in Badakhshan and nearby Kunduz provinces in large-scale counterterrorism operations in April.

The level of violence in northern Afghanistan has surged during this spring's fighting season. The region, which is rich in natural resources, has been one of the most secure in the country throughout the 14-year war.

Afghan and NATO officials have said Taliban fighters have been forced to flee northward after a government offensive in March and April cleared them from their traditional strongholds in southern Helmand province.