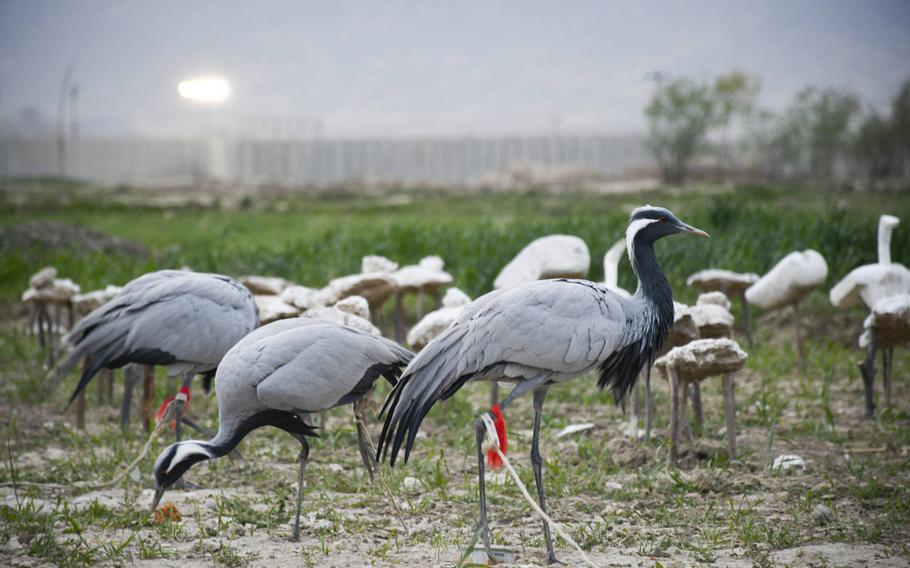 A crane with its leg tied up to prevent escape stands as bait for other birds during a morning hunt, yards away from the outer walls of Bagram Airfield, the largest U.S. base in Afghanistan. Locals hunt ducks and cranes in the wetlands outside the base, and sell them either as pets or meat. (J.P. Lawrence/Stars and Stripes)

A crane with its leg tied up to prevent escape stands as bait for other birds during a morning hunt, yards away from the outer walls of Bagram Airfield, the largest U.S. base in Afghanistan. Locals hunt ducks and cranes in the wetlands outside the base, and sell them either as pets or meat. (J.P. Lawrence/Stars and Stripes) 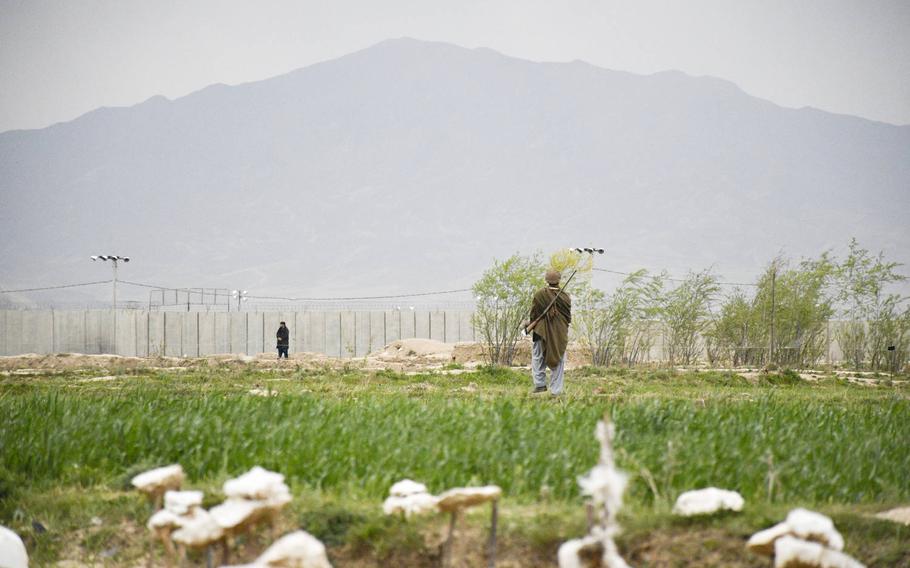 A hunter stalks birds near the outer walls of Bagram Airfield, the largest U.S. base in Afghanistan. The area outside the base has grown over the last 20 years, as workers from all over the country arrived to find jobs. (J.P. Lawrence/Stars and Stripes) 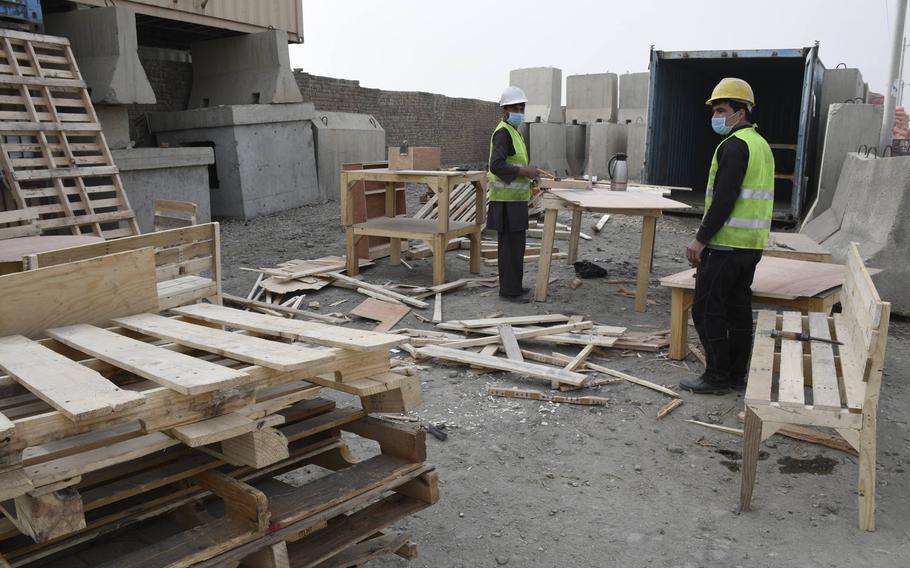 Carpenters in the village outside of Bagram Airfield pick through discarded wood pallets from the base to find the ones most suited to build tables, chairs and birdhouses. The area developed an economy over the last 20 years built on serving the needs of Americans and NATO allies. (J.P. Lawrence/Stars and Stripes) 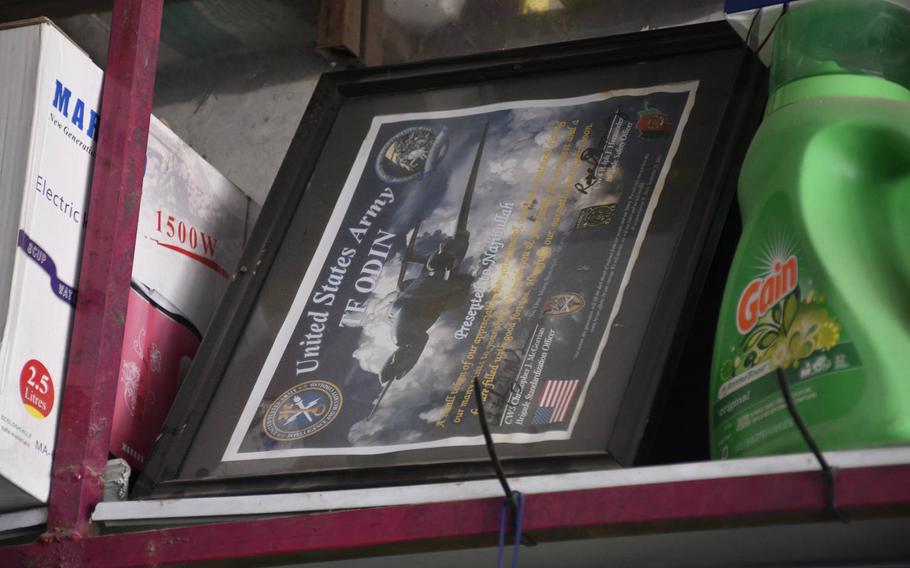 A certificate from U.S. troops to an Afghan shopkeeper is available for sale in the town outside Bagram Airfield, Afghanistan. The soldiers thank a shopkeeper for his courtesy during ''our many visits to your shop,'' underscoring the deep connection between the base and the local economy. (J.P. Lawrence/Stars and Stripes) 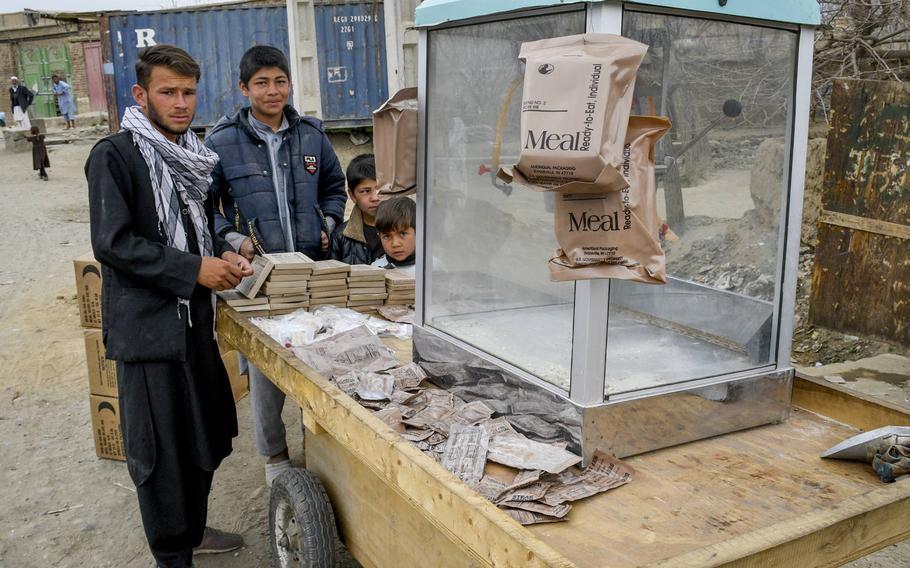 Children at a cart outside Bagram Airfield, Afghanistan sell items from Meals, Ready to Eat, the food rations issued to U.S. troops, in March 2021. Much of the economy nearby is dependent on what the base discards. (J.P. Lawrence/Stars and Stripes)

KABUL, Afghanistan — Over the last 20 years, Bagram and other towns in Afghanistan became dependent on the sprawling U.S. military bases nearby for their economy and their security.

In a few months, they may not have much of either.

The flow of discarded goods from Bagram Airfield slowed to a trickle last year when U.S. troop levels in the country went from 12,000 down to about 2,500. What’s left of that commerce is expected to run out by Sept. 11, the date set for all U.S. and NATO troops to have left the country.

“People are becoming jobless,” said Abdul Shokoor Qudoosi, governor of the district around Bagram Airfield, and “they fear if the Taliban comes again, there will be problems for the people who worked with the Americans.”

People in the towns so readily identified with coalition troops could fall victim to a new wave of violence, said Qudoosi, who recalled the viciousness of battles the Taliban fought around Bagram as they took over the country in the 1990s.

But while the U.S. presence endures, shops outside the base continue selling their dwindling supplies of energy drinks, shampoos, protein bars and other items. Children at a cart hawk items from Meals, Ready to Eat, the food rations issued to U.S. troops. A stick of American beef jerky sells for about 13 cents.

Thousands of Afghan workers once worked on America’s largest base, pumping money into the economy and indirectly affecting nearly every person in the district, Qudoosi said.

But the boom times are over. Business crashed about eight months ago, said Shaiq Ghafouri, a 16-year-old shopkeeper outside the base. His customers cannot afford to buy much and his sales are one-fifth of what they were before.

“If business keeps decreasing, I’ll have to close my store,” Ghafouri said.

Last year’s drawdown was a smaller version of the “retrograde” of 2014 that closed hundreds of bases across the country. That drawdown was disastrous for the Afghan economy, and a repeat could destabilize the country, said Jonathan Schroden, special operations program director at the Center for Naval Analyses.

“The departure of large numbers of U.S. forces — as we saw in 2014 — leads to uncertainty about the future of the country, which reduces people’s willingness to start businesses, invest in new infrastructure and spend money in Afghanistan,” Schroden said.

If the economy gets worse, people may take up weapons again to feed their families, said Thomas Ruttig, co-director of Afghanistan Analysts Network.

“Afghanistan might become worse off (economically) than during the Soviet era,” Ruttig said.

In other provinces, some places become poorer and more dangerous when U.S. troops left last year.

In Lashkar Gah in Helmand province, which has seen heavy fighting, hundreds of people lost jobs when the bases closed, said Haji Awal Gul, a tribal elder. Former workers are worried about their safety.

“Everyone knows who has worked with the Americans,” Gul said.

In Tirin Kot, a base in southern Uruzgan province that the U.S. left last year, the security bubble maintained by the coalition troops evaporated, said Haleem Khan, a local doctor.

Khan’s cousin worked as a cleaner for American troops for many years.

“He is mostly in hiding now,” Khan said of his cousin, who fears Taliban retribution.

Afghans who worked on the bases remain in the memories of some former service members. Adam Weinstein, a Marine veteran who served in Tirin Kot in 2012, recalled how the helicopters leaving Tirin Kot would test fire their machine guns, and how children would run under the helicopters to grab the spent brass to resell.

Those children, running under the machine guns, underscored how closely the economy was connected to the war, said Weinstein, now a research fellow for the Middle East at the Washington D.C.-based Quincy Institute for Responsible Statecraft.

Weinstein, speaking after the announcement of the end of the U.S. involvement in Afghanistan, a decision he supports, wondered about what is next for the Afghans he knew.

“For the majority of veterans, the war was a small but significant portion of their lives. But for them — the war never stopped for them,” he said.