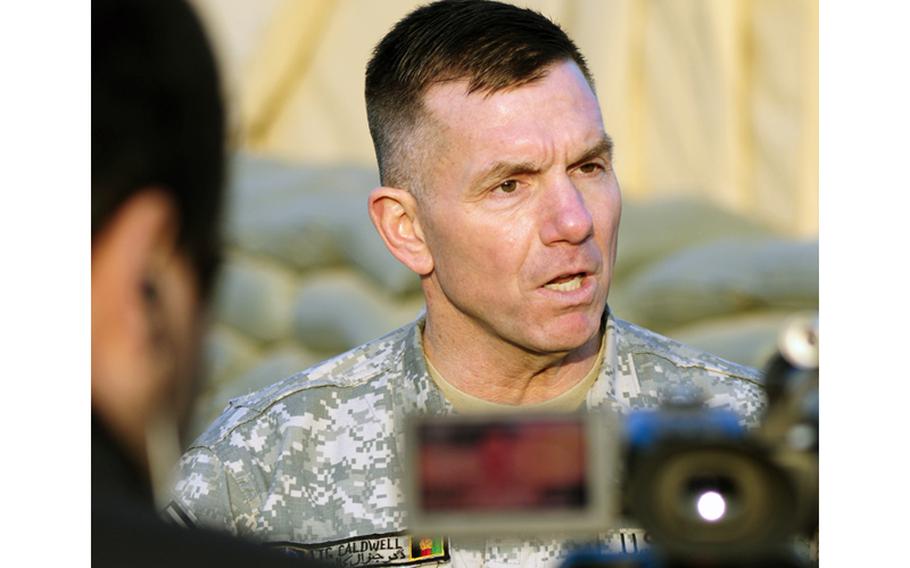 ARLINGTON, Va. &mdash; The top NATO training commander in Afghanistan said the mission to grow the Afghan National Security Force at an ambitious pace is pressing ahead, but still struggling to overcome illiteracy rates as high as 85 percent and attrition rates at nearly 50 percent in some units.

NATO needs an additional 56,000 Afghan security forces to meet its October 2011 goal of 305,000 personnel. But the number of recruits who do not finish their service due to desertion, injury or dropouts is so high that Caldwell estimates NATO will have to recruit and train 141,000 people in 15 months.

Still, Caldwell is optimistic the training mission will meet deadlines.

&ldquo;We have made significant progress,&rdquo; he said, speaking to Pentagon reporters via satellite.

NATO has increased its training capacity significantly since last fall, he said. The ANSF met its recruiting goal for this year already, passing through 58,000 people. Caldwell said he expects the year-end total to reach 70,000.

To do so, NATO has increased wages, added hazard and longevity pay, and instituted force-wide literacy training. Currently 27,000 security forces are enrolled in reading classes, and NATO hopes to increase enrollment to 50,000 by December and 100,000 by next June. Afghans are taught third-grade reading skills, just enough to give a soldier some accountability for their military responsibilities.

But at what cost?

&ldquo;I&rsquo;ve never actually been asked that question before,&rdquo; Caldwell said. &ldquo;How much does it actually cost to train a soldier or policeman? I&rsquo;ve not ever technically stopped to figure out &mdash; because there&rsquo;d be all sorts of costs associated with it, so I don&rsquo;t really have an answer for you on that one.&rdquo; Caldwell said when he first arrived in the job last fall, he dismissed literacy training as something for Afghans to do on their own time. But he quickly realized soldiers could not read the serial numbers on their own weapons or even their own bank account statements to know they were getting paid.

One year later, problems persist. Last week, 90 out of 100 Afghan troop surveyed by coalition troops said they weren&rsquo;t being paid. It turned out the money was in their bank accounts. The soldiers simply could not read.

When asked how the October 2011 schedule played against the White House&rsquo;s July 2011 date to begin transferring power, Caldwell cautioned observers on how far Afghans had to go before they could transition to independent operations.

&ldquo;We have not even finished building the Afghan National Army or the police force or the air force, at this point,&rdquo; he said.

And Afghans cannot take the lead, he said, until they field all of the &ldquo;key enablers,&rdquo; such as logistics, maintenance, transportation, and intelligence, currently being provided by the international coalition. &ldquo;None of those organizations have been built and brought online.&rdquo;

The biggest challenge, Caldwell said, will be meeting the required size of the Afghan National Civil Order Police, a subset of the national police. With just 5,700 officers today, NATO will have to more than triple that force size by October 2011 to reach its 18,500 requirement.