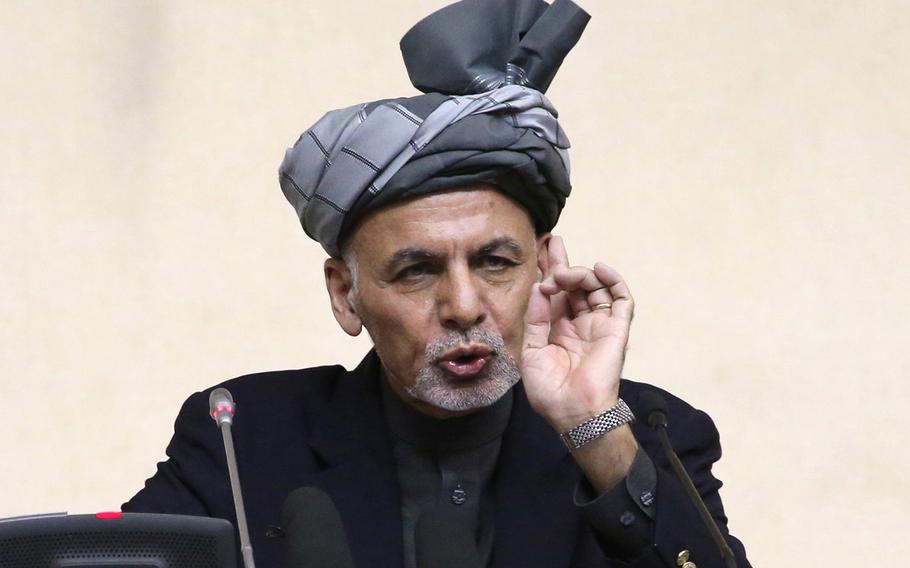 In this photo released by Afghanistan's Presidential Palace, President Ashraf Ghani speaks during a joint meeting of the National Assembly in Kabul, Afghanistan, Monday, April 25, 2016.Afghanistan's leaders will head to Brussels this week, seeking billions of dollars in aid as the country confronts an increasingly powerful Taliban insurgency and pervasive corruption. ()

KABUL, Afghanistan — President Ashraf Ghani vowed Monday that the Afghan government would take a harder line with the Taliban after a suicide bomb attack here last week that killed nearly 70 people and left about 350 wounded.

Speaking before a joint session of the two houses of parliament, he promised to execute those involved in terrorism. The “time for unjustified amnesty is over,” he said.

The president’s harsh tone appeared aimed at capitalizing on public opinion against the Taliban and building support for the country’s beleaguered unity government, which has struggled to wipe out the insurgency and improve living conditions in the economically troubled country.

On April 19, insurgents pulled off a complex attack on the Afghan intelligence agency office in the crowded Puli Mahmood Khan neighborhood, first detonating a massive truck bomb during the morning rush hour and then opening fire on security personnel. The Taliban claimed responsibility for the assault.

The Afghan government “has ended its efforts in calling for peace and will now use all its resources to defend the country,” he said.

But he stopped short of abandoning the peace process.

The door will remain open for negotiations with Taliban members who are ready to stop the bloodshed, he said, but that opening will not last forever.

Martine van Bijlert, co-director of the Kabul-based Afghanistan Analysts Network, said the speech was meant to project strength to the Afghan people who were shaken and angered by the attack.

Last week, Afghans took to Twitter with the refrain “Kabul is bleeding,” along with prayers and expressions of sadness and anger.

The blast outside the main intelligence agency not far from the presidential palace rattled windows throughout the capital and underscored criticism that the government was not doing enough to improve security.

Ghani’s address to parliament was an attempt to portray an Afghan government that’s strong and unified, van Bijlert said, rather than besieged and internally dysfunctional. But it’s too soon to tell whether that’s the case, she said.

Officials face a number of challenges in the coming months, analysts said, including a September deadline to hold local elections and convene a gathering of Afghan leaders to amend the country’s constitution. Failure to do so could further undermine the government’s legitimacy in the eyes of some Afghans.

How the government handles the appointments of a defense minister and the new head of national security may also be a good indicator of whether it has turned a corner, van Bijlert said. Ghani has promised that candidates for these long-standing vacancies will be announced soon.

Michael Kugelman, a South Asia specialist at the Washington-based Woodrow Wilson International Center for Scholars, said the speech was intended for an international as well as a domestic audience: the NATO members on which Afghanistan relies for funding and support.

“I think (Ghani) wanted to convey to NATO countries that Afghanistan is ready to keep fighting this war,” Kugelman said. He added that it raised the question of how this would be accomplished without foreign assistance.

Ghani promised to present a five-year war strategy to be finalized at NATO’s Warsaw Summit in early July.

“There seems to be a sense of purpose and a sense of urgency in this government,” Kugelman said, but given the political realities in Afghanistan, “it wouldn’t take much for this newfound sense of unity to be shattered.”

While the backlash against the Taliban seems to be hardening Afghan resolve, it has also strained the already frayed relations between Kabul and Islamabad — some Afghan officials suggest the attack was planned in Pakistan, where they say the Taliban are given sanctuary.

In a significant shift, Ghani said Afghanistan would no longer seek Pakistan’s help to bring the Taliban to the table, as it had in the past. He called on Islamabad to crack down on terrorist groups such as the Haqqani network, which some Afghan officials have charged was involved in last week’s attack.