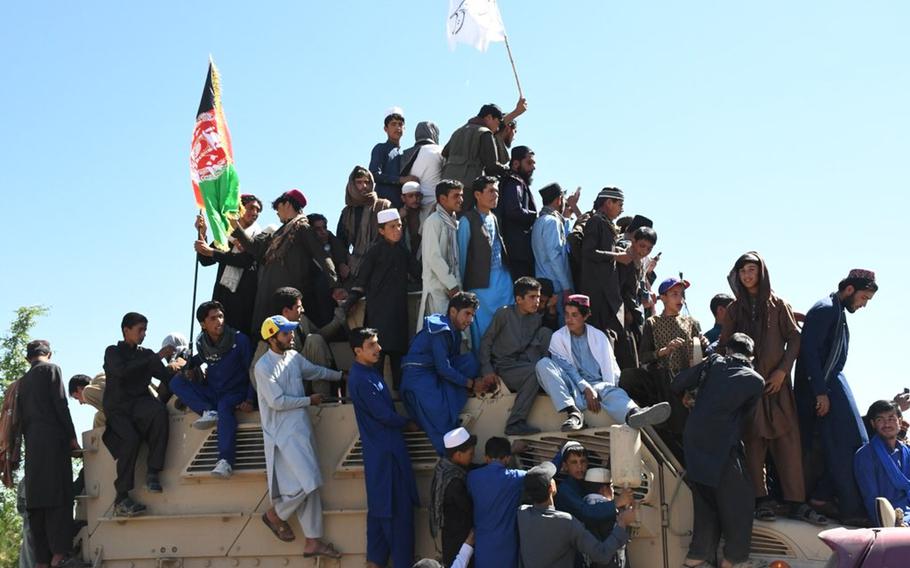 Men crowd atop an Afghan army mine-resistant ambush protected vehicle waving the Afghan and Taliban flags on Saturday, June 16, 2018, in Logar province's capital of Pul-e-Alam on the second day of jubilant gatherings to celebrate cease-fires. Later in the day, a suicide bomber blew himself up in eastern Afghanistan killing 21 people and wounding another 41, said the Nangarhar provincial Police Chief. Most of the dead and wounded were believed to be Taliban. (J.P. Lawrence/Stars and Stripes)

Men crowd atop an Afghan army mine-resistant ambush protected vehicle waving the Afghan and Taliban flags on Saturday, June 16, 2018, in Logar province's capital of Pul-e-Alam on the second day of jubilant gatherings to celebrate cease-fires. Later in the day, a suicide bomber blew himself up in eastern Afghanistan killing 21 people and wounding another 41, said the Nangarhar provincial Police Chief. Most of the dead and wounded were believed to be Taliban. (J.P. Lawrence/Stars and Stripes) 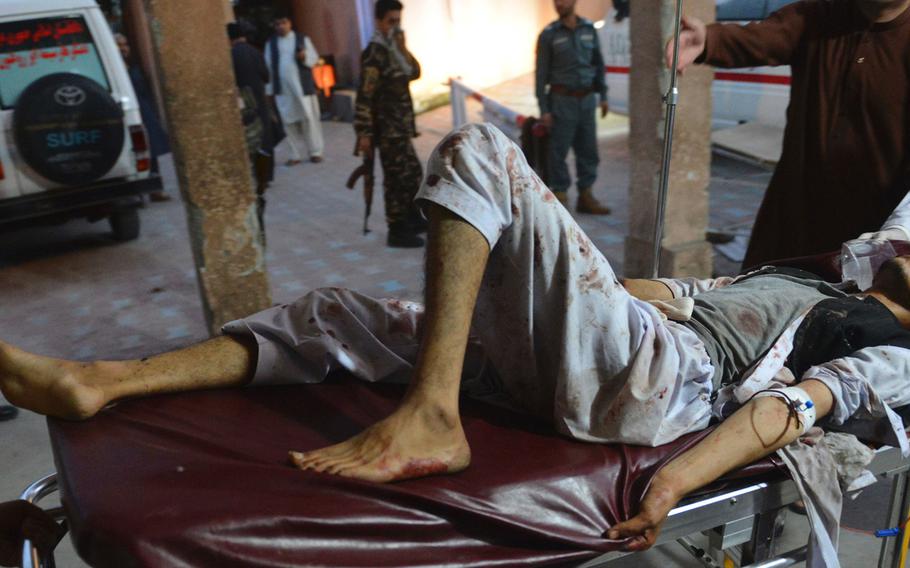 A wounded man is brought by stretcher into a hospital in Jalalabad city, capital of Nangarhar province, east of Kabul, Afghanistan, Saturday, June 16, 2018. (Mohammad Anwar Danishya/AP) 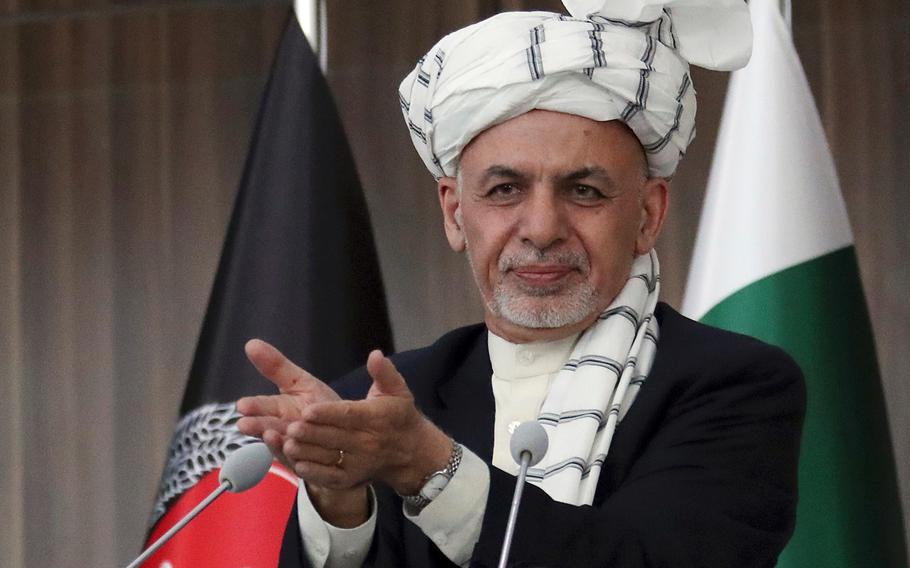 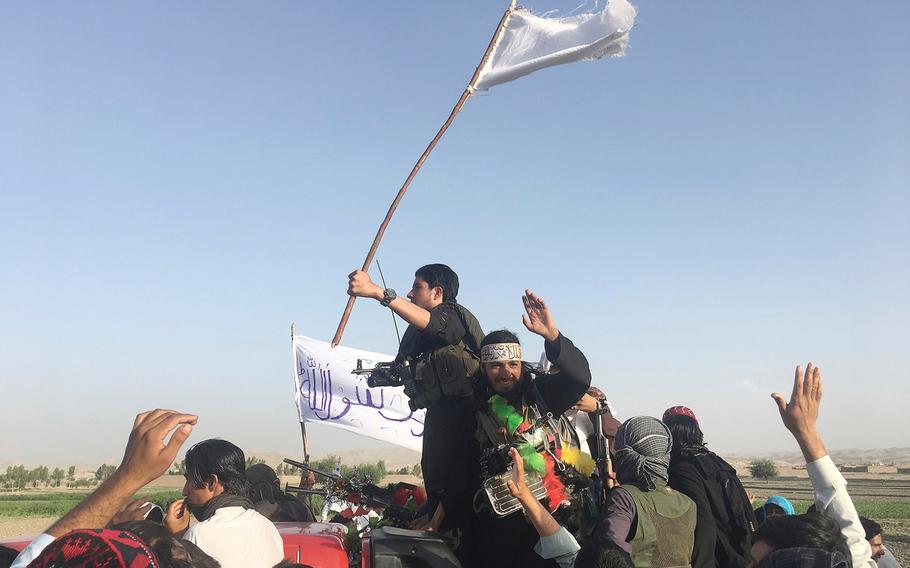 PUL-E-ALAM, Afghanistan — Afghan President Ashraf Ghani ordered an indefinite extension to a government cease-fire with the Taliban late Saturday, even as a blast in eastern Afghanistan cast a pall over a countrywide celebration of the Eid al-Fitr holiday and historic dual cease-fires.

Ghani last week announced an eight-day cessation of offensive operations against the Taliban surrounding the end of the Muslim holy month of fasting. U.S. and other foreign forces said they would honor the temporary truce, part of a gambit to induce the Taliban to lay down their weapons and enter peace talks to end the 17-year Afghan War.

Days later, the Taliban said they would observe an unprecedented three-day cease-fire with government forces during the Eid holiday, which began Friday.

Secretary of State Mike Pompeo said in a statement Saturday that the United States supports Ghani’s cease-fire extension and call to begin peace talks, which would include looking at the role of international forces. The Taliban have long called for the withdrawal of the Kabul government’s foreign backers.

“Peace talks by necessity would include a discussion of the role of international actors and forces,” Pompeo said. “The United States is prepared to support, facilitate, and participate in these discussions.”

Celebrations hit by attackGhani’s announcement came via televised address and followed more than 24 hours of celebrations that had seen Afghan soldiers hugging and greeting Taliban militants in city centers to mark the cease-fires and the end of the Muslim holy month of fasting.

The first day of celebrations brought a strange sight — presumed Taliban fighters walking up to Afghan soldiers at checkpoints and taking selfies with them. Friday dozens of armed men believed to be Taliban walked freely through the bazaar in the capital of Logar province.

But by Saturday evening, shortly before Ghani’s address, more familiar news of violence broke the spell when a deadly blast rocked a stadium in Nangarhar province where civilians, Taliban and Afghan government officials were celebrating the cease-fires. Attaullah Khogyani, the provincial governor’s spokesman, said at least 26 people were killed and 16 wounded in the blast. The local Islamic State affiliate claimed responsibility for the attack.

U.S. forces are focusing on fighting the local ISIS franchise and other militant groups not covered by the Kabul government’s cease-fire. Afghans and others had feared the terrorist group might use the lull in fighting to strike.

Kicking off the cease-fire

Earlier Saturday, jihadists across Afghanistan appeared to be enjoying the dual cease-fires declared last week by the Afghan government and Taliban leadership. Social media users across posted photos and videos of men on both sides of the conflict embracing or participating in impromptu parades. In Logar province, young men piled atop an Afghan Mine Resistant Ambush Protected vehicle waving both the Afghan and Taliban flags.

After hearing reports of the Taliban in the bazaar on Friday, Brig. Gen. Abdul Raziq Safi, commander of the 203rd Corps’ 4th Brigade, went to check it out.

“They’re 100 percent Taliban,” he said, after getting out of his SUV among a crowd of militants and hugging them.

The crowd, some of whom were more fervent than others, began to chant.

Despite the revelry, the 203rd Corps planned to continue patrolling its area of responsibility in seven provinces south and east of Kabul during the holiday, said corps commander Gen. Showr Gul.

In a call with brigade commanders, Ghani said via webcast Friday evening that the government is hoping for the best — that there will be peace — but is staying vigilant in preparation for the worst.

Ghani also said he was directing his intelligence service to ensure that the Taliban does not use the cease-fire as an opportunity to amass weapons and stage future attacks.

Calls for peaceMany Afghans have already called for the cessation of hostilities to be extended. The ebb in violence comes as many war-weary Afghans throughout the country have grown increasingly vocal in calls for peace and as religious leaders have denounced the Taliban’s jihad.

U.S. officials, who are working to bring the insurgents into peace talks with the Kabul government, said before the temporary holiday cease-fire that they’d seen signs some Taliban, too, have grown tired of fighting.

Local media reported Afghan troops and Taliban militants came together peacefully for the first time in several provinces, including for Eid prayers at a mosque in Kandahar. The southern province is the Taliban’s spiritual homeland, where it was founded in the 1990s.

In eastern Laghman province, resident Matiullah Atiqi told Stars and Stripes by phone it was like a “double Eid” to see such scenes in towns there and many locals hoped it would lead to lasting peace.

Some Afghans remained wary of the Taliban, even amid the outward joy in places like Logar, after so much fighting. It was unclear how long the truce might last.

The 4th Brigade commander’s driver, Sgt. Maida Gul, throwing up his hands in befuddlement when asked what he thought of the spectacle.

“Yes, we have to come together and be peaceful, but this is the first time anything like this has happened,” he said.

Safi, the brigade commander, later admitted he was also uneasy about the Taliban crowd, but got out for selfies so as not to look weak or fearful.

Back at his base outside Pul-e-Alam on Friday evening, a group of Taliban elders came to plead with military and village elders for the release of four young men arrested two days earlier for planting a bomb on the very street where Afghan and Taliban men were hugging and taking selfies.

The brigadier general, who had lost a battalion commander two months earlier to an improvised explosive device blast, was reluctant to free the young men, but would later write to his commander recommending they be released for goodwill’s sake.

Franz J. Marty and Zubair Babakarkhail contributed to this report.