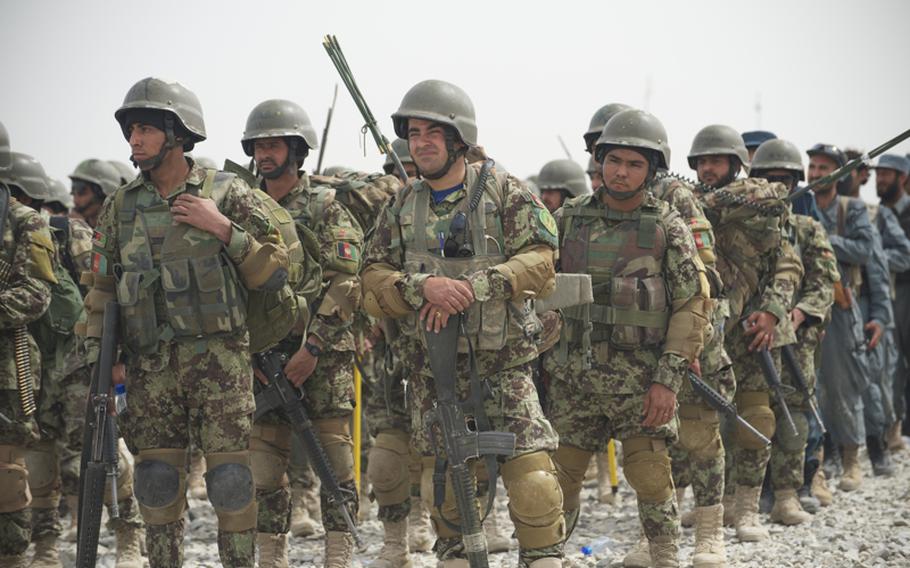 KABUL &mdash; Despite a major setback to the country&rsquo;s air force and escalating casualties among its troops, the Afghan military will begin taking control of security in more than 50 additional districts across the country, officials announced Monday.

The next phase of the planned transition to full Afghan control of the country by the end of 2014, called &ldquo;Tranche Four,&rdquo; is to start within two months, and will include 52 districts in 12 provinces, though in nearly 20 percent of the districts mentioned, NATO&rsquo;s International Security Assistance Force has already withdrawn all troops.

The announcement comes at an awkward time, just three days after a report saying the U.S. was scrapping the Afghan air force&rsquo;s entire fleet of large cargo planes, due to lack of spare parts. Logistics problems have plagued the Afghan military, and with the loss of their C-27A cargo planes, they must rely on much smaller Cessna 208&rsquo;s and a fleet of Russian helicopters for transport.

Afghan forces have also been taking staggering casualties, losing more than 300 soldiers a month this year, as NATO forces withdraw and Afghan troops are thrust out front without the sophisticated technology or armored vehicles that help protect international soldiers from roadside bombs.

A press conference to announce the decision included Afghanistan&rsquo;s top security officials, who spoke of a turning tide in the 11-year-old war.

&ldquo;In all the provinces where the transition took place, the enemies of Afghanistan tried to attack but the Afghan security forces not only defended the areas, but defeated the enemy,&rdquo; Afghan Minister of Defense Bismillah Mohammadi said.

The ministers faced a skeptical Afghan media, though, and when pressed on the loss of the cargo planes, Mohammadi, admitted that the loss of the aircraft, which had barely flown in the past year, was a big blow to the military.

&ldquo;The main problem we have is the Afghan air force and there are a lot of problems there,&rdquo; he said. &ldquo;The 16 C-27s we were provided were useless and increased our problems.&rdquo;

The decision to move ahead with the next phase of transition was made by Afghan President Hamid Karzai at a meeting of the Afghan National Security Council Sunday, according to Ashraf Ghani Ahmadzai, chairman of the Afghan government&rsquo;s Transition Coordination Commission. The deadline for all foreign combat troops to leave Afghanistan is the end of 2014 and, despite deep skepticism among many experts, ISAF officials have consistently expressed confidence the Afghan Security Forces will be ready to defend the country by that deadline.

&ldquo;President Karzai&rsquo;s announcement of the fourth group of provinces to enter Transition is another historic step for Afghanistan as it gets closer to taking full responsibility for security of the entire country,&rdquo; ISAF commander Gen. John R. Allen said in a released statement Monday.

&ldquo;This step demonstrates the success of our strategy and the progress that the men and women of ISAF, working closely with our Afghan partners, are achieving every day in Afghanistan,&rdquo; Panetta said. &ldquo;Going forward, our efforts in Afghanistan will continue to ensure that the Afghan people can secure and govern themselves, and to deny safe haven to al-Qaeda.&rdquo;

While many of the provinces slated for transition are in the relatively peaceful northern provinces, there are also many on the list in violence-plagued areas, such as Helmand, Wardak and Ghazni provinces. In Ghazni alone, some 13 districts are to be handed over, including Andar, where an ongoing uprising has pitted armed villagers against Taliban fighters.

Nine of the 52 districts mentioned are in provinces where NATO has already pulled out troops, so it&rsquo;s unclear what further transition would take place.

While touting the improvement of the Afghan security forces and the estimate that this phase will bring 87 percent of Afghans under Afghan-led security, Ghani admitted that the country&rsquo;s troops are incurring a heavy toll.

&ldquo;Our police are overburdened and our army has been stretched,&rdquo; Ghani said.