Afghan forces take over responsibility for security from NATO 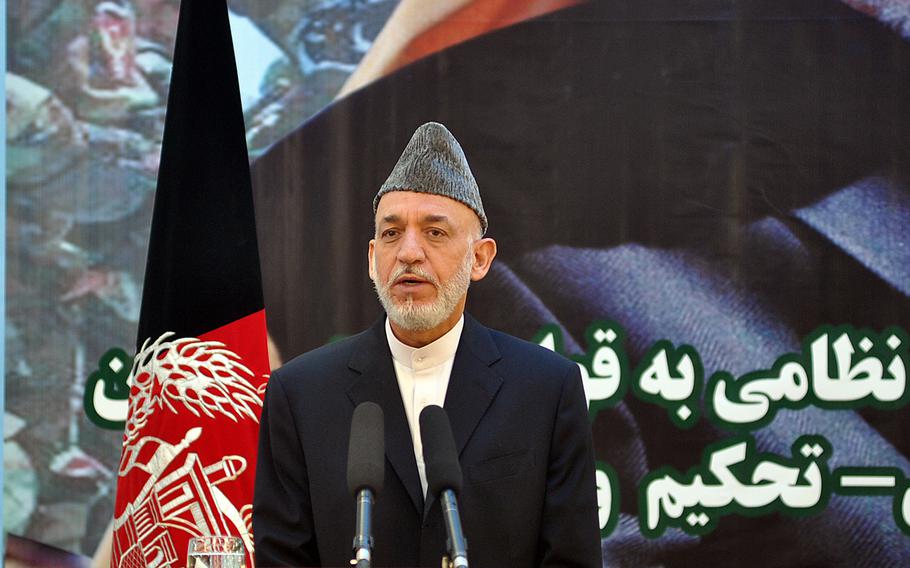 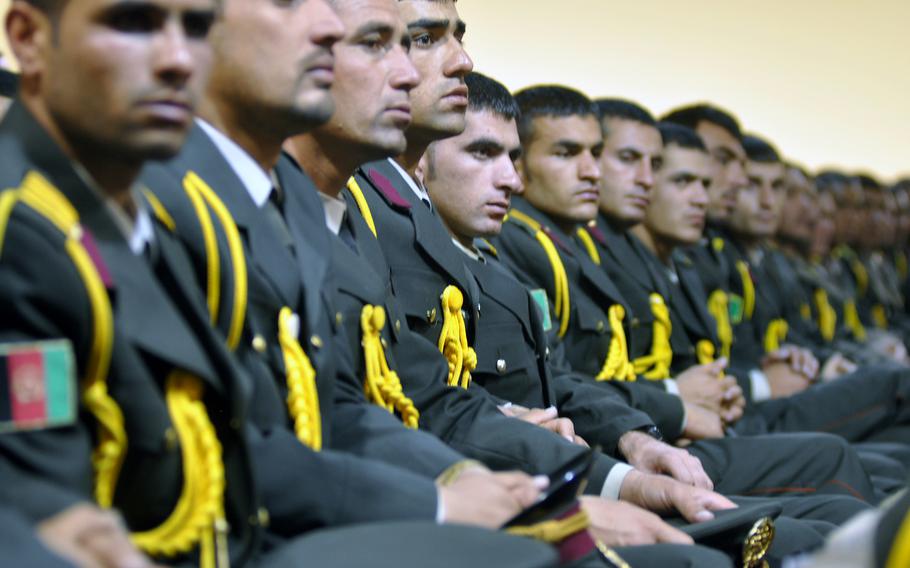 KABUL — Afghan President Hamid Karzai announced Tuesday that Afghan troops will begin the final step toward taking full responsibility for security in all of Afghanistan, amid continued fighting in much of the country and stepped up attacks in the capital, including an explosion shortly before Karzai’s speech.

But what the so-called “tranche 5” transition actually will mean on the ground remains murky. Coalition officials have said for months that Afghans were already in the lead and struggled to quantify what had changed with Tuesday’s announcement. Neither Karzai nor coalition officials gave a firm timeline for when this phase would be complete.

Surrounded by dignitaries, including the head of NATO-led forces and the alliance’s secretary-general at Afghanistan’s National Defense University, Karzai said security for all of Afghanistan will be led by Afghan forces “in a few months.”

The announcement comes a year and a half before all foreign combat troops are scheduled to leave Afghanistan. They already have turned over much of the security responsibility to Afghan forces, who have been suffering heavy casualties as they do more of the fighting on their own.

Gen. Joseph Dunford, commander of the NATO-led International Security Assistance Force (ISAF), said there will be more international combat support available in the most violent areas, but added that even in those spots, Afghan forces would lead all operations.

Dunford said he is concerned about the number of Afghan troops being killed and wounded in combat, but added: “I don’t think at this point it reflects on their ability to secure the country.”

There are still roughly 100,000 international troops in the country, including more than 60,000 Americans, and ISAF troops still regularly patrol with their Afghan counterparts in some of the more violent parts of the country. Afghan forces also still rely heavily on ISAF for air support and logistics, as the fledgling Afghan Air Force lacks ground support jets and cargo planes.

ISAF is banking on rapid improvement of the Afghan National Security Forces, still beset by logistical problems, lack of equipment and high turnover.

“Ten years ago, there were no Afghan national security forces,” he said. “Five years ago, Afghan forces were a fraction of what they are today. Now you have 350,000 Afghan troops and police, a formidable force.”

Tuesday’s announcement underscored that more than 11 1/2 years after the U.S. invaded Afghanistan and ousted the Taliban regime following the Sept. 11, 2001, attacks, the NATO-led force is asking the Afghan military to do what NATO has been unable to: defeat the Taliban.

But for many, hopes for an end to the war hinge on potential peace talks with the insurgents, which Karzai said he hoped would begin soon. These hopes were bolstered Tuesday, with the Taliban announcing they had finally opened an office in Qatar, a long-expected step seen as crucial to beginning peace talks.

The Associated Press and The Washington Post reported Tuesday that U.S. representatives would begin formal meetings with the Taliban in a few days at the group’s new office.

The AP cited senior Obama administration officials, who spoke on condition of anonymity because they were not authorized to speak on the record, describing the Taliban’s move to open a political office in Doha as a stepping stone to the movement’s full renouncement of al-Qaida.

During his speech, Karzai encouraged the Taliban to participate in next year’s elections, an idea he has floated in the past.

“I would, by all means, support Taliban representation in the elections next year,” he said at a news conference after his announcement.

But the challenges of fighting the insurgency were underscored by an attack just before Karzai’s announcement. A bomb targeting a member of parliament killed three people in the capital, the third attack in the capital in two weeks, including a massive blast last week that killed 17 people, mostly employees of Afghanistan’s supreme court.

Some experts both in Afghanistan and the United States were skeptical of the ability of Afghan forces to defend the country.

If the transition happens gradually, the Afghan forces should be able to stand on their own, but if ISAF tries to transition too quickly to Afghan control of security, some of the hardest fought areas could backslide, said Ahmad Majidyar, a research fellow at the American Enterprise Institute and a frequent adviser to the U.S. Army.

“I don’t think this will be a full transition, in a way that the ANSF will continue to be supported, and it will continue to need the support of the coalition forces,” he said. “Without them the ANSF can’t function. It will be very dangerous if this transition is seen as a one-time event, and not as a process.”

“I personally thinks it’s going to be hard for the Afghan security forces to take this huge responsibility in defending the country against insurgents and keeping an eye on the long, open border.”

“Our security forces are not yet very united,” he said. “Some of them are still working for their own internal group, language or tribe. But today’s announcement gives them morale and courage to work for the national interest.”

Ordinary Afghans also expressed mixed feelings about the ability of their forces to take over security for the country.

“I am excited because I feel Afghanistan is in full control of the country now,” said Mohammed Nasim, 36, a tailor in Kabul.

But Akbar Khan, a taxi driver in the eastern city of Jalalabad, said corruption is still a problem for the military and that meddling neighbors still threaten Afghanistan’s peace.

“Nothing will improve if our neighbors, like Pakistan, don’t stop intervening in Afghanistan’s affairs,” he said.