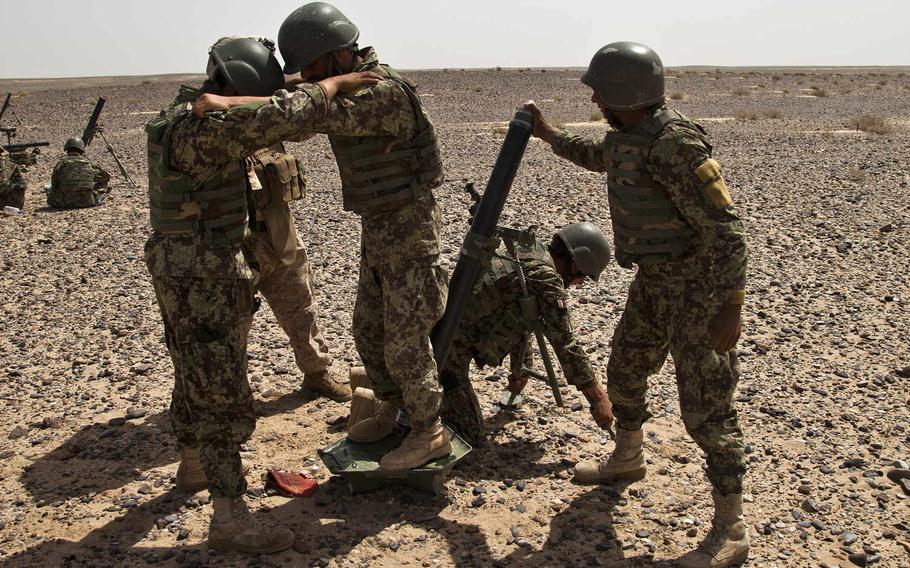 An Afghan National Army soldier prepares to fire an 82mm light mortar outside Camp Dwyer, Helmand province, Afghanistan, in 2012. The United Nations said Tuesday, June 30, 2020, that the Afghan army was responsible for an attack that left dozens, including children, killed or injured in Helmand province on Monday. Soldiers missed their targets while fighting the Taliban and the mortars landed in a cattle market, the U.N. said. (Cpl. Ammon W. Carter/U.S. Marine Corps)

KABUL, Afghanistan — The Afghan military was responsible for errant mortar attacks that killed or injured dozens at a cattle market in southern Helmand province this week, the United Nations said Tuesday.

Afghan soldiers fired the mortars at Taliban fighters Monday morning but missed and struck the market, leaving 23 dead, including children, the provincial governor’s office said following the attack. The U.N. was unable to verify the death toll Tuesday.

The Taliban and the Afghan government each blamed each other for the deaths.

U.S. Embassy in Afghanistan Charge d’Affaires Ross Wilson called the attack a “mass murder of innocent civilians” and offered condolences to the victims and their families in a statement Tuesday.

The U.N. called for a thorough investigation.

“Both parties must stop fighting in civilian-populated areas,” a U.N. Twitter post said Tuesday. “Such indirect fire incidents in ground engagements cause 1000s of civilian casualties each year.”