Afghan elders meet to consider post-2014 pact with US 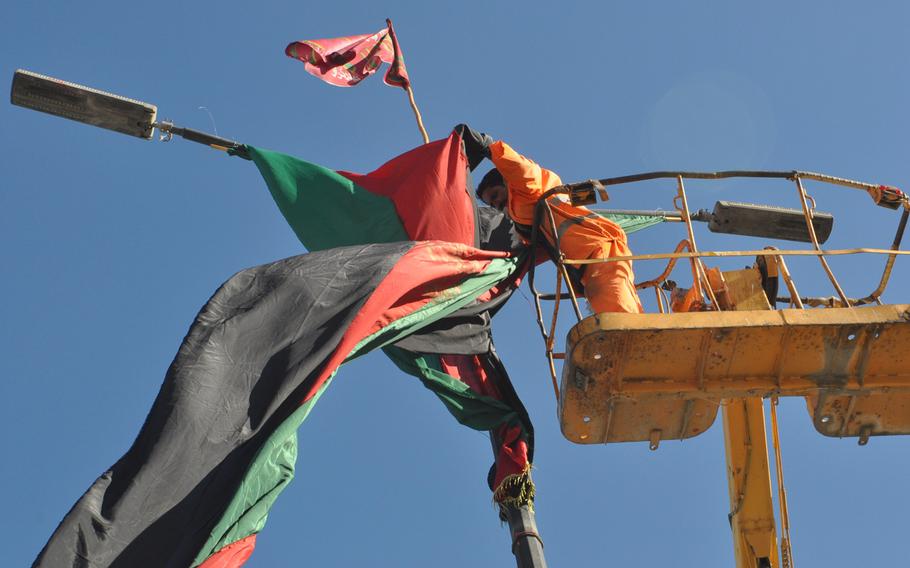 KABUL — After weeks of building up the importance of a grand council’s decision on a crucial U.S.-Afghan security accord, President Hamid Karzai opened the conference Thursday with a speech in which he made only scant mention of the one issue likely to decide whether U.S. forces remain in Afghanistan after 2014.

At issue is a stipulation in the proposed bilateral security agreement between the U.S. and Afghanistan that would ensure the U.S. retains legal jurisdiction over its troops in Afghanistan.

In his hour-long speech to the council, or Loya Jirga, Karzai threw a few characteristic barbs at the international military coalition, but also underscored that Afghanistan needs the continued support.

“I’m asking for tanks, they’re giving us pickup trucks,” he said of NATO, but added that cutting ties with the alliance now would be a mistake.

“Right now, trust between me and America is not good — they do not trust me and I do not trust them [American Leaders]” he said. “Because I kept fighting them the past 10 years for the respect and life of Afghans, and they also issued a lot of propaganda against me.”

But in his only mention of the jurisdiction issue, he deferred entirely to the Loya Jirga.

“The only issue I was telling [the U.S.] is out of my authority, is giving immunity to foreign soldiers in Afghanistan — I was telling them that our Loya Jirga can decide it.”

Without such a guarantee, the U.S. — and the rest of the NATO-led international military coalition — will almost certainly pull all troops from the country at the end of 2014. Many experts fear such an outcome would leave vulnerable the fledgling Afghan security forces, who still rely heavily on the international military coalition for intelligence, technology and air support.

Karzai could have approved the security agreement outright, but instead convened the Loya Jirga, whose decisions are non-binding, but carry weight in Afghan society. Parliament will have the final say on the agreement which was finalized following several phone calls between Karzai and U.S. Secretary of State John Kerry just a day before the 2,500 delegates to the Jirga convened.

Though some see the Jirga meeting as simply political cover for Karzai to approve an extended foreign troop presence in the country, it seemed the content of his speech mattered to delegates, many of whom professed to be undecided about the security pact going into the conference.

Before the speech, delegate Bilqees Hadi, a Balkh province provincial council member, said she still needed convincing before accepting the bilateral security agreement, which she said must continue to uphold gains in women’s rights.

“We want the president to convince us that the bilateral security agreement is in favor of Afghanistan,” she said.

After the speech, some, like Haji Latif, a jirga delegate from Nangarahar province, said Karzai sounded the right tone.

“It was full of information, full of contexts, and that was what we wanted to hear from Karzai” he said.

The issue of legal jurisdiction over foreign troops is touchy — last week 3,000 people gathered to speak against protecting international troops from prosecution in Afghan courts — and it’s likely there will be intense negotiations during the four-day meeting as Jirga members break up into 50 discussion committees.

While the U.S. and other nations in the NATO-led International Security Assistance Force have been steadily reducing troop numbers in Afghanistan over the past two years ahead of the Dec. 31, 2014, deadline for all foreign combat troops to leave the country, American military leaders are pushing to keep a residual training and assistance force in the country for some years to come. The United States and its allies have discussed keeping 8,000 to 12,000 NATO troops in the country, though a final number has not been announced.

The bilateral security agreement being considered by the Loya Jirga is key to keeping troops in the country. Failure to agree similar terms in Iraq led to the complete U.S. withdrawal from there two years ago.

The draft of the agreement says Afghanistan “agrees that the United States shall have the exclusive right to exercise jurisdiction over such persons in respect of any criminal or civil offenses committed in the territory of Afghanistan.”

Whether U.S. troops can continue to carry out “night raids” has also been a contentious issue. Afghan culture views Americans’ uninvited entry into peoples’ homes in the middle of the night as particularly galling.

The draft says that Americans are not permitted to target Afghan civilians, “including in their homes, consistent with Afghan law and United States forces’ rules of engagement.”

Karzai also read a letter from President Barack Obama, in which Obama hailed agreement on the bilateral accord and emphasized that America’s role would be “one of a supporting partner.”

Acknowledging Afghan concerns about “the sensitive issue of the safety and privacy of people in their homes,” Obama wrote: “U.S. forces shall not enter Afghan homes for the purposes of military operations, except under extraordinary circumstances involving urgent risk to life and limb of U.S. nationals.”

The opening day of the jirga had a slightly chaotic feel to it: due to last-minute wrangling between Washington and Kabul over the wording of the security agreement, delegates didn’t even receive a copy of the proposed document until they arrived for the Jirga. During Karzai’s speech, he was interrupted at length by a senator from western Afghanistan, who harangued him about civilian casualties caused by military raids conducted by foreign troops, another sticking point in the agreement. She was eventually escorted out, but he was interrupted again a short time later, this time by several delegates shouting messages of encouragement.