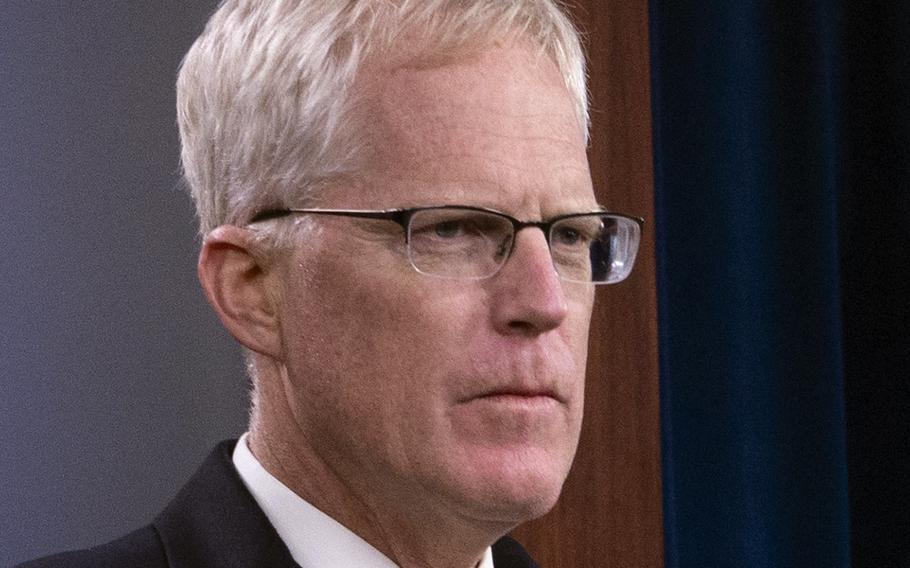 His mission, he said, was to make certain that Afghan President Ashraf Ghani understands “we are still behind him” despite the U.S. troop drawdown there.

The acting defense secretary’s visit to the country follows a car bomb explosion Sunday in Kabul that killed nine people and wounded 20 others. On Saturday, militants fired five rockets onto Bagram Airfield in Parwan province, the largest U.S. base in Afghanistan, from a small truck parked in a nearby village.

Afghanistan continues to see violence against government forces and civilians by the Taliban and other terrorist groups such as the Islamic State. A peace agreement in February between the United States and the Taliban laid out conditions for the Taliban to meet, including reducing violence and stopping attacks on U.S. and NATO troops. The United States in return agreed to reduce the number of troops in the country.

On Nov. 17, Christopher Miller announced plans to reduce U.S. forces in Afghanistan and Iraq by Jan. 15, five days before President-elect Joe Biden is sworn into office. The new administration would have 2,500 troops in Afghanistan and 2,500 in Iraq, while the situation in both countries remains precarious.

The United States, as well its NATO allies, have tried to get the Taliban to do more to reduce the violence, according to a senior defense official who spoke on condition of anonymity.

“As to the levels of violence against the [Afghan National Security Forces] and civilians, no, the Taliban have not made those commitments. And [the violence] has not been reduced,” he said.

Army Gen. Mark Milley, the chairman of the Joint Chiefs of Staff, met last week with Taliban representatives in Doha, Qatar, where they are holding negotiations with the Afghan government. For two hours, he discussed the need for a reduction in violence in Afghanistan, The Associated Press reported. Milley has said he talks did not lead to any breakthroughs.

Not only are attacks by the Taliban a concern for the Pentagon but so are al-Qaida and ISIS activities in the country.

Zalmay Khalilzad, the American special envoy for Afghan reconciliation, has warned the violence is “distressingly high” and could threaten the peace agreement, according to a recent Defense Department inspector general report on Afghanistan.

Miller said he told Ghani that he was sorry for the attacks in the country and the Afghan people were paying the price for the violence.

The peace negotiations between the Afghanistan government and Taliban representatives started in September after several months of delay.

“It’s so much easier to start a war than it is to end one,” Miller said soon after he landed in Kabul. “I just think this is the real critical time in the peace process. And [Ghani] is going to be the one to lead and have the courage to move forward on it.”

This is not Miller’s first time in Afghanistan. He was among the first soldiers on the ground after the 9/11 terrorist attacks.

“I feel like the circle is complete. This was the first time I was in combat, I think I was at 14 years in the service, and now to be here to see the contours and outlines of the war winding down and ending. ... It’s pretty significant for me,” he said.