‘A cornucopia of goodwill’: Troops in Syria get stockings stuffed with goodies delivered by helicopter 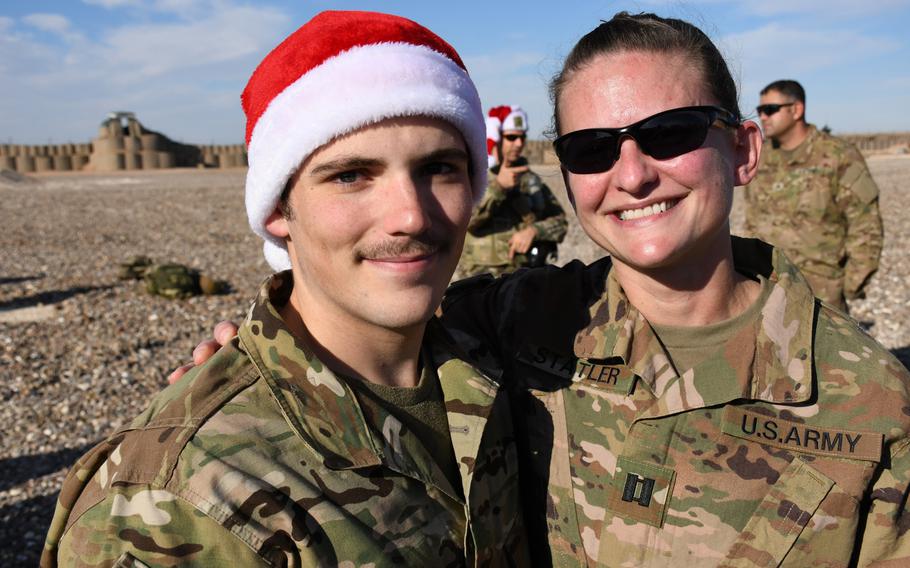 Sgt. Teaghen Goida and Capt. Chelsea Statler pose for a photo during a Christmas celebration at a remote base where they were deployed in Syria's Deir El-Zour province on Monday, Dec. 23, 2019. (Chad Garland/Stars and Stripes)

Sgt. Teaghen Goida and Capt. Chelsea Statler pose for a photo during a Christmas celebration at a remote base where they were deployed in Syria's Deir El-Zour province on Monday, Dec. 23, 2019. (Chad Garland/Stars and Stripes) 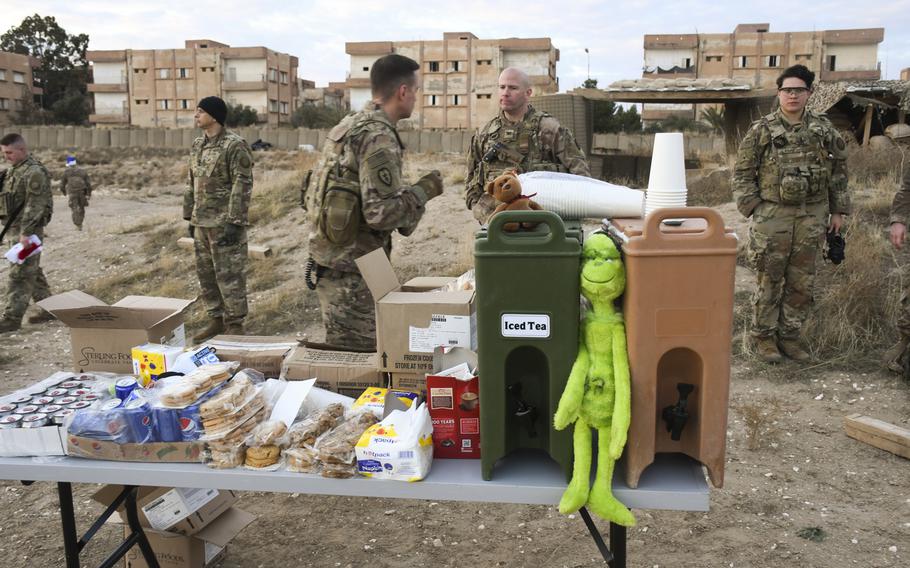 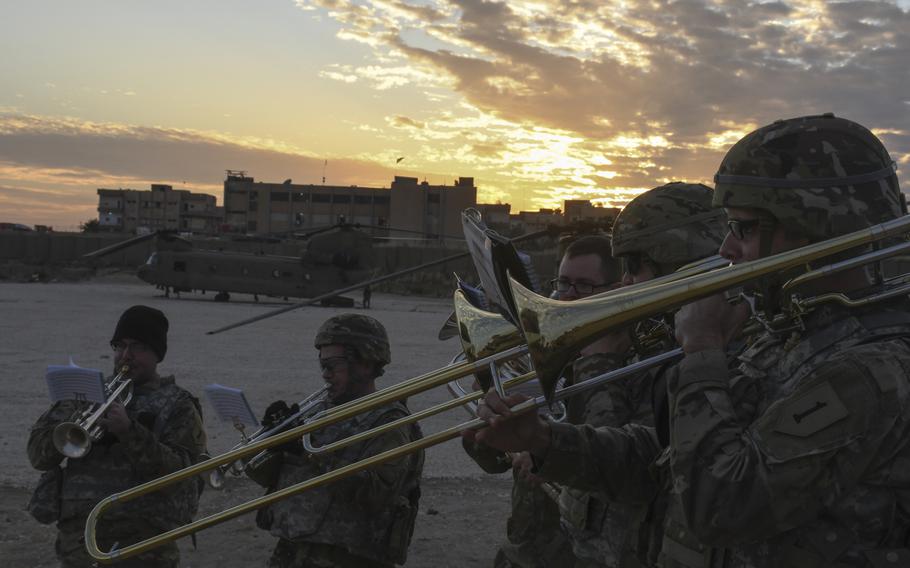 Troops unload goodies for special operations troops deployed to a small camp in Hassekeh province during a mission to spread holiday cheer on Monday, Dec. 23, 2019. (Chad Garland/Stars and Stripes) 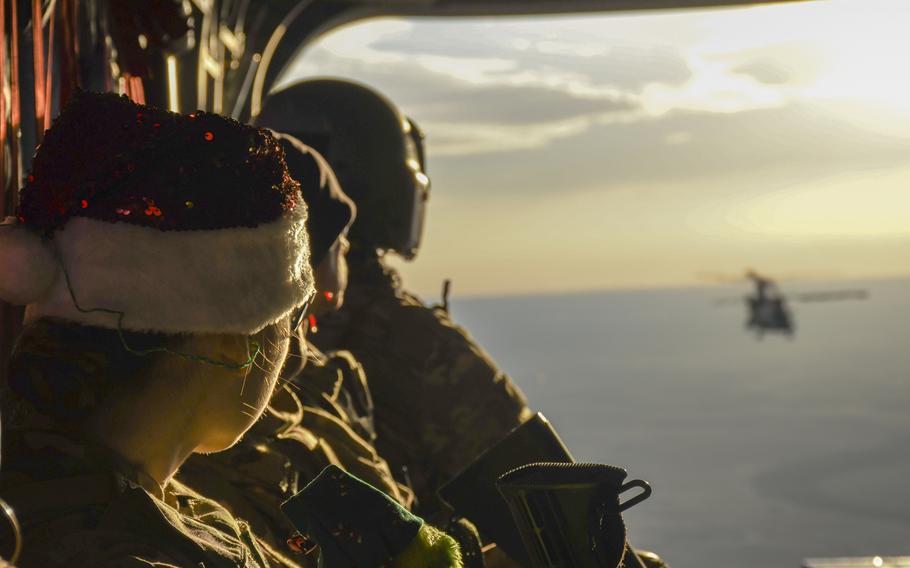 Troops on a holiday tour to bring cheer to U.S. service members forward deployed throughout eastern Syria watch the sunset from the back of a CH-47 Chinook helicopter in the skies over the wartorn country on Monday, Dec. 23, 2019. (Chad Garland/Stars and Stripes) Sgt. Brittany Rockwell carries a stuffed Grinch toy back to a CH-46 Chinook during a special holiday mission to spread cheer to troops deployed to austere camps in Syria's Deir el-Zour province on Monday, Dec. 23, 2019. (Chad Garland/Stars and Stripes) A service member decorated his boots with bells and beads for Christmas on a whirlwind holiday tour to spread cheer to American troops forward deployed to austere bases in Syria on Monday, Dec. 23, 2019. (Chad Garland/Stars and Stripes) Smoke from burning oil at a Syrian oil field rises in the background as American troops deployed to an austere base in Deir el-Zour province gather for a brief holiday celebration on Monday, Dec. 23, 2019. (Chad Garland/Stars and Stripes) 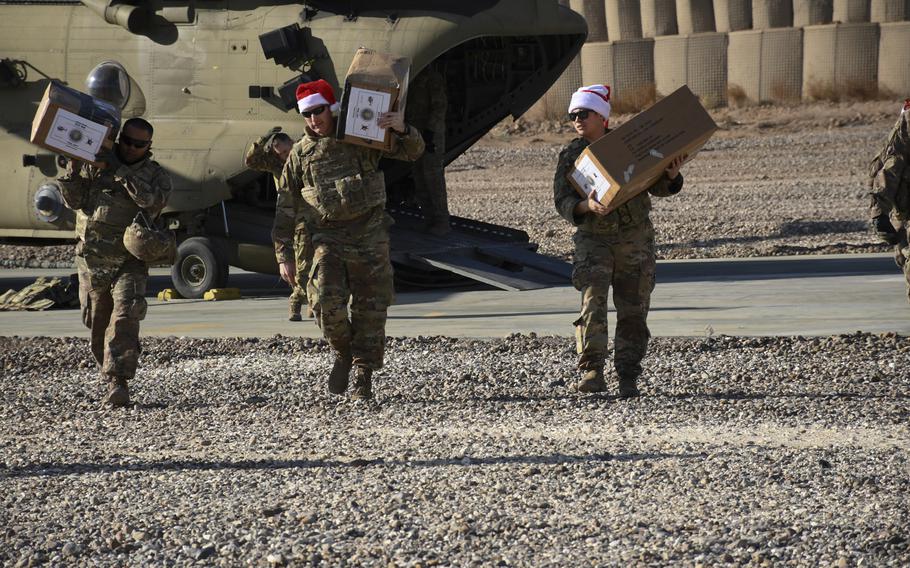 Brig. Gen. Stephen Jost, chief of staff for the U.S.-led coalition to defeat the Islamic State group in Iraq and Syria, is pictured here (center) carrying a box of treats from a CH-47 Chinook in Syria's Deir el-Zour province during a holiday mission to spread cheer to forward deployed troops at an austere camp on Monday, Dec. 23, 2019. (Chad Garland/Stars and Stripes) Sgt. Brittany Rockwell carries a case of Rip-Its off a CH-47 Chinook helicopter during a special holiday mission to spread cheer to troops deployed to austere camps in Syria's Deir el-Zour province on Monday, Dec. 23, 2019. (Chad Garland/Stars and Stripes)

DEIR EL-ZOUR PROVINCE, Syria — Donning Santa hats and riding in Chinooks instead of sleighs, a combined military mission delivered holiday cheer to U.S. troops at several austere camps on what one general called the “outside edge” of America’s military footprint in eastern Syria on Monday.

Several high-ranking officers and NCOs in the U.S.-led coalition to defeat the Islamic State brought gifts and goodies, as well as surprise recorded video messages from home for men and women deployed to Deir el-Zour and Hassakeh provinces, where last month U.S. troops resumed large-scale operations with Kurdish-led partner forces against ISIS, after a brief pause earlier this year.

But the helicopter rotors may have kicked up a little too much dust, as some of the service members watching the videos appeared to get watery eyes during the brief celebrations.

One of the first to view a message from home, a bearded man whom Pentagon officials asked not be photographed or named, quickly flipped his sunglasses down over his eyes as the message from his young children ended.

“Eyeball sweat,” someone teased from the crowd of a few dozen troops, who applauded and said “aww” behind him.

The videos were part of what unclassified labels on boxes of stockings called Operation Holiday Express, though an official asked that one of the destinations handwritten on the box not be photographed, due to its sensitive nature. At some sites, which officials said had not before been visited by media, they asked that identifying features not be photographed, and at one site, Stars and Stripes was not allowed to take photos at all — though it was too dark anyway.

At several sites, a loose formation of soldiers, some bearded and anonymous, others clean-shaven and bearing unit combat patches, awaited the arrival of their visitors, who included Lt. Gen. Pat White, commander of the U.S.-led coalition, and his staff — several of them wearing Santa hats.

“Just a little bit of merriment today, then you’ve got to get back to work,” White told one of the groups after thanking them for all that they do. “All right, get back to work. No, just kidding. God bless you guys.”

The troops throughout Syria are a mix of conventional forces who serve on tower guard duty and conduct presence patrols, for example, while special operations units train, advise and assist their local partners — “and occasionally … combat-enable a strike or raid” — said Col. Myles Caggins, a spokesman for Combined Joint Task Force – Operation Inherent Resolve.

At a couple of sites, Command Sgt. Maj. Daniel Hendrex, the senior noncommissioned officer for Inherent Resolve, grabbed razors from care package boxes brought along on the visit and handed them out to long-whiskered special operations troops, joking that he’d be a bad sergeant major if he didn’t ask them to shave.

U.S. troops at these outposts get limited access to “creature comforts” of more built-up bases in the region, such as post exchanges, Caggins said.

The holiday tour was meant to bring them niceties they’d otherwise do without, made possible by “a cornucopia of goodwill” from the U.S., he said, including donations from the USO of Fort Hood, Texas; McLean Bible Church of Vienna, Va.; and a group called Montana Supporting Military.

“A little touch of home goes a long way toward morale,” he added.

A brass quintet from the 1st Infantry Division band, flown into the region recently from Fort Riley, Kan., played holiday tunes, while stockings stuffed with donated snacks, hygiene gear and letters from children were distributed at each camp. Cookies were handed out, and hot chocolate was served.

“They knew I wanted snacks — I got snacks,” said Pvt. Rance Ramsey, who deployed as part of the 25th Infantry Division’s 3rd Battalion, 21st Infantry Regiment, upon inspecting his stocking.

Pfc. Damion Fortmeyer of Independence, Mo., also with 3-21, was pulled off guard duty early to take part in the celebration and watch a video his family recorded for him.

Fortmeyer spends about eight hours a day on watch, he said. Other than the sounds of occasional gunfire and explosions, not much seems to happen, he said.

Fortmeyer and Ramsey have moved around a lot in recent months, they said, and postal deliveries haven’t quite caught up to them yet. At each place, it seems like the mail arrives just after they’ve left, Ramsey said, so the stockings would tide them over to the next care package.

In October, President Donald Trump ordered American forces pulled back from near the border with Turkey ahead of that country’s incursion into northern Syria. Some of those troops were pulled back into Iraq but are now returning to Syria, Caggins said.

U.S. partner forces had previously occupied all of the camps and desert outstations visited on Monday, but the Americans had moved into some of them only recently, after shifting from northern and western parts of the country to “operating strictly in the eastern parts,” Caggins said.

The Pentagon now plans to keep about 600 troops in Syria indefinitely, defense officials have said, though Caggins declined to discuss numbers. They’re staying to guard the oil, Trump has said, though the Pentagon says they’re there to ensure ISIS is defeated to the point that local forces can contain the terrorist threat.

Cpl. Calvin Kenno is deployed to a site in the country’s eastern Deir el-Zour province with a company from an attack helicopter battalion of 1st Cavalry Division’s 1st Air Cavalry Brigade — his second Christmas away from home in three years.

The first, he was a newlywed on a 9-month rotation to Europe, he said, and now he’s missing a chance to make holiday memories with his two young children.

Kenno stood in front of a music stand holding a tablet computer that played a video of his family, with the audio piped through a portable loudspeaker. Apache attack helicopters stood not far behind him, black smoke from an oil fire rising in the distance.

When his wife asked how many presents Santa would bring daddy, Kenno’s son counted: “One, two, wee, fow, five.”

As in all the messages, the family expressed pride, best wishes and sadness about their loved one’s absence.

“That was a tear-jerker,” Kenno said after the clip ended and a buddy clapped him on the back. Moments later, he added: “It just makes me happy.”