3 US contractors killed in shooting at Kabul airport 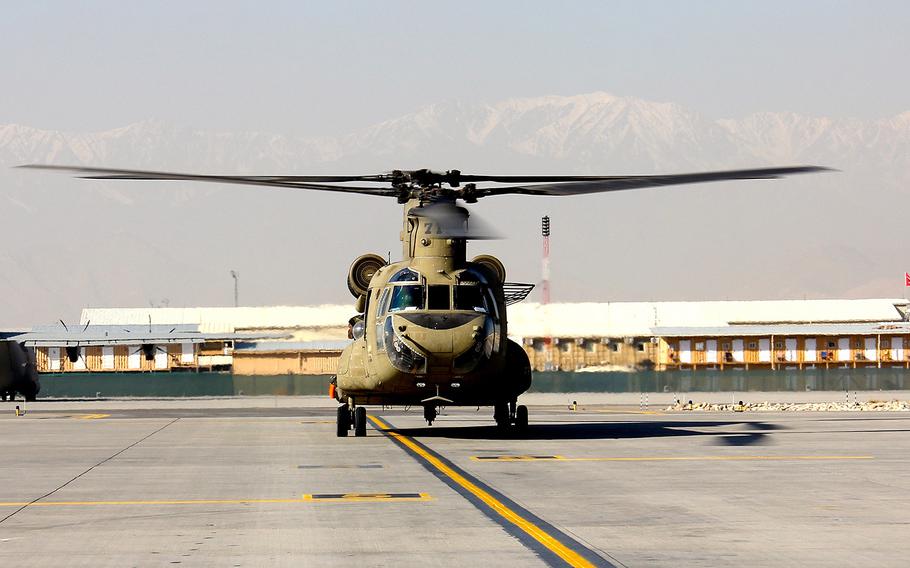 A CH-47 Chinook helicopter sits on the tarmac at Kabul International Airport on Dec. 8, 2014. Three contractors working with the international military coalition in Afghanistan were shot and killed Thursday, Jan. 29, 2015, on the military side of the airport. (Jarrod Morris/U.S. Army)

KABUL, Afghanistan — Three U.S. contractors were killed and a fourth wounded Thursday in a shooting in Kabul, a U.S. defense official said.

Two media outlets reported that the shooter was an Afghan in an Army uniform.

U.S. Army Col. Brian Tribus, a spokesman for the NATO-led Resolute Support mission, said the shooting occurred at about 6:40 p.m. at the military side of Kabul’s international airport.

The shooting is under investigation, he said.

Tribus said an Afghan national also was killed but would not confirm whether the Afghan was a member of the security forces or whether he was the shooter. Afghan military officials reached late Thursday night could not provide any more details.

The military base at the airport hosts Afghan military units as well as advisers from a variety of NATO and allied countries. In 2011, the airport was the scene of the deadliest insider attack of the war when eight U.S. airmen and a contractor were killed by an Afghan officer.

Green-on-blue, or insider attacks, peaked in 2012 as the NATO forces were ramping up training of the ANA.

The U.S. and NATO then began a major review of the vetting process for Afghan recruits for the police and the army to include checking on the identities and loyalties of village elders and Afghan officials who are required to vouch for the trainees, the officials said.

Maj. Gen. Harold J. Greene, a 34-year veteran, who was the deputy commanding general of Combined Security Transition Command-Afghanistan, is the highest ranking victim of such attacks. He was killed in Kabul on Aug. 5, 2014, when an Afghan soldier fired into a group of Americans from a bathroom window.