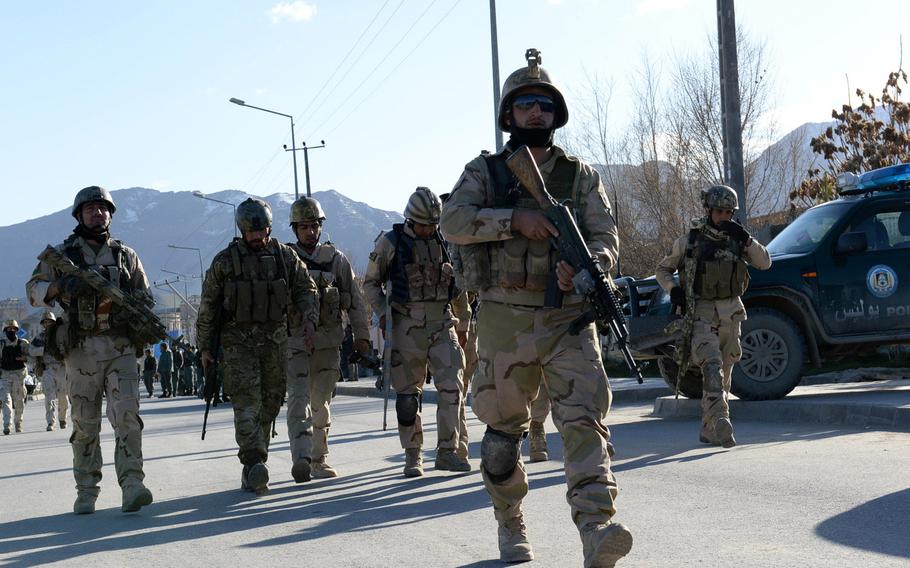 In this file photo from March 2014, Afghan national security forces leave the scene of an attack on an election office in Kabul. (Josh Smith/Stars and Stripes)

Near-daily bombings in Kabul have coincided with the inauguration of new Afghan President Ashraf Ghani. The attacks appear intended to demonstrate the Taliban’s capability to strike at will even in the heavily guarded capital.

A Defense Ministry statement said three of its staff were killed and eight injured in the blast, which occurred when a man walked to a minibus that was picking up passengers and detonated the explosives he was carrying. The attack was carried out near the old royal Darulaman palace in western Kabul.

Taliban spokesman Zabiullah Mujahid said the group was responsible for the attack.

On Wednesday, seven soldiers died and 19 people were wounded in two Taliban suicide attacks on an Afghan military bus and a security vehicle in different parts of Kabul.

A bomb exploded near Kabul airport without causing casualties Monday, when Ghani was inaugurated during a massive security clampdown in the capital.

On Tuesday, Washington and Kabul signed a bilateral security pact that will allow nearly 10,000 U.S. troops to remain in Afghanistan after the withdrawal of NATO combat forces at the end of this year.

The Taliban have vowed to continue fighting until all foreign troops leave the country.

But in a possible indication that the insurgents may consider the new administration more flexible than the previous one, Taliban leader Mullah Omar said in a statement that the group would also pursue “political means” to achieve its objectives.

“In addition to the military efforts, the Islamic Emirate is striving to reach its goals through establishing positive relations with trusted international sides,” he said in a statement received by Stars and Stripes on Thursday. In his inaugural address, Ghani urged the Taliban to rejoin an effort at reconciliation that foundered last year after former President Hamid Karzai objected to the opening of a Taliban representative office in Qatar, where the talks were scheduled to be held.