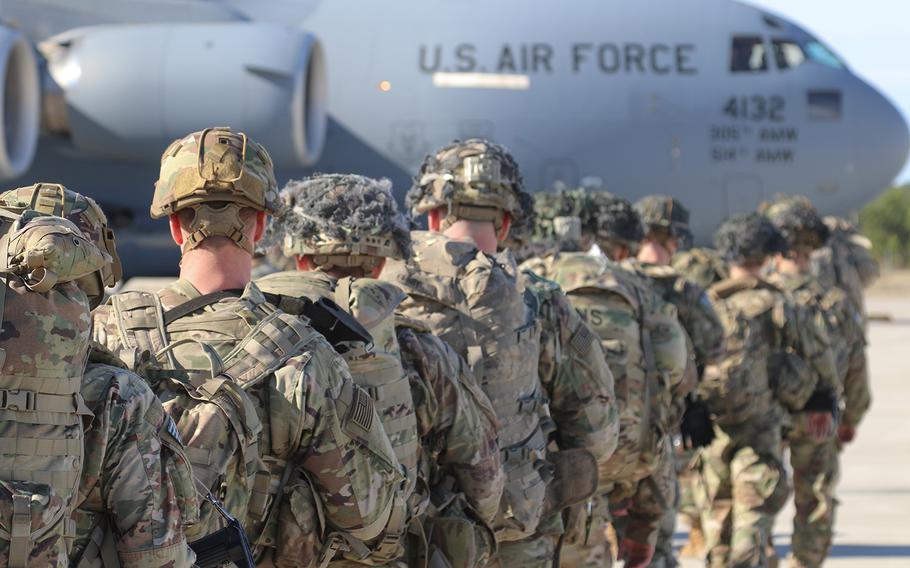 WASHINGTON — The Pentagon is sending thousands of additional troops to the Middle East to bolster security and its ability to respond quickly to expected violence throughout the region after a U.S. airstrike in Baghdad killed Iran’s most powerful general, defense officials said Friday.

The new deployment will include roughly 3,000 82nd Airborne Division soldiers who were placed on prepare-to-deploy orders earlier this week amid growing tensions in Iraq between the United States and Iran, two officials said. At least several dozen special operations troops were also deployed to the region, one of the officials said. The officials spoke on the condition of anonymity because the deployments had not been announced publicly early Friday afternoon.

The 82nd soldiers — members of the division’s 1st Brigade Combat Team — were expected to deploy to several locations throughout the Middle East, the officials said. An element of that brigade — some 750 soldiers from its 2nd Battalion, 504th Parachute Infantry Regiment — arrived in recent days in Kuwait after they were rapidly deployed there in response to an attack on the U.S. Embassy in Baghdad on Tuesday.

Iran promised retaliation Friday after confirming the death of Gen. Qassem Soleimani in a U.S. drone strike as he arrived Thursday night at Baghdad International Airport. Soleimani was the leader of that nation’s elite Quds Force, Iran’s military organization that works hand-in-hand with its proxy forces throughout the region, including in Iraq, Syria, Lebanon and Yemen.

The Pentagon had designated Soleimani a terrorist responsible for the deaths of about 500 U.S. troops in Iraq, who were killed by Iran-built explosively formed penetrators — armor-piercing roadside bombs that wreaked havoc on American forces during the height of the war in Iraq.

Soleimani’s “reign of terror is over,” President Donald Trump said Friday afternoon in an address from Mar-a-Lago, his Palm Beach, Fla. resort.

The president warned Iran that the United States has the world’s strongest military and would use it again if threatened. But he said his decision to strike Soleimani was not meant to start a new war in the Middle East.

“We took action last night to stop a war,” Trump said, adding Soleimani should have been killed years earlier. “We did not take action to start a war.”

Secretary of State Mike Pompeo said earlier Friday that Soleimani directed the rocket attack by the Iraqi-Shia militia Kataeb Hezbollah on Dec. 27 against a U.S.-Iraqi base in Kirkuk in northern Iraq that killed an American contractor and wounded four U.S. troops and two Iraqis. Soleimani was also to blame for the attack by Iran-controlled militiamen of the Popular Mobilization Forces on the U.S. Embassy in Baghdad on Tuesday, Pompeo said in an interview on CNN.

The attempted siege on the embassy came as retaliation for a series of U.S. airstrikes Sunday against Kataeb Hezbollah locations in Iraq and Syria, which killed at least 25 militiamen and injured dozens more.

The strike on Soleimani could elicit a much stronger response from Iran and its proxy forces, which looked to the powerful Iranian as a cult leader-like figure, experts on the region and members of Congress warned.

Sen. Jack Reed, D-R.I., said he worried the strike on the general increased the likelihood of war with Iran.

“Killing Soleimani in this manner strengthens the hardliners in Iran and increases the likelihood that Iran’s proxies will be triggered into action," Reed, the top Democrat on the Senate Armed Services Committee, said in a statement. "And if his killing results in America abandoning the U.S. Embassy in Iraq, it will be a coup for the Iranians."

"He was the right fist of the Ayatollah and we took the Ayatollah’s arm off," Graham said in a statement. "This is not an act of revenge for what he’d done in the past. This was a preemptive, defensive strike planned to take out the organizer of attacks yet to come."

Jon B. Alterman, the director of the Middle East program at the Center of Strategic and International Studies think tank in Washington, said Iranian retaliation was unlikely to turn into a full-blown ground war, but attacks on American positions through the region and cyberattacks were likely to come in the coming weeks and months.

“Iran will respond, forcing itself to the forefront of U.S. foreign policy considerations for years to come and drawing the United States into precisely the sort of shadowy battles the Pentagon has been trying to escape for more than a decade,” Alterman said. “As a consequence of this action, the United States will grow more enmeshed militarily in the Middle East despite President [Donald] Trump’s avowed desire to leave the region.”

Trump said Friday that he did not seek a change to the Iranian regime, but he warned that further escalation by Iran or its proxy forces would lead him to respond further.

“I am ready and prepared to take whatever action is necessary,” Trump said. He did not take questions from reporters following his address.

The defense officials did not rule out additional troop deployments in the near future, saying Pentagon leaders were considering their options and would adjust their force posture in the region as necessary.

Last year, the Pentagon added some 14,000 troops to the Middle East, citing Iranian aggression, which included attacks on commercial ships, the downing of an American drone over the Persian Gulf and strikes on critical oil infrastructure in Saudi Arabia. Most of the troops deployed included a Navy carrier strike group, bomber and fighter jet personnel and air and missile defense troops. The deployment of the 82nd Airborne’s 1st Brigade and special operators marks the first increase in front-line combat troops as a response to Iranian actions.

The 82nd troops were alerted they could be deployed on short notice this week following the embassy attacks, which did not result in any American casualties. The troops are assigned as the Army’s Immediate Response Force, a unit charged with being able to deploy anywhere in the world within 18 hours after activation.

The response unit, formally known as the Global Response Force, was activated this week for the first time since 2010, when soldiers were rapidly deployed to Haiti following a devastating earthquake.

It was not clear Friday how long the 82nd troops would remain in the Middle East. Defense Secretary Mark Esper said Thursday morning — before the strike on Soleimani — that the initial 750 soldiers deployed would be there as long as they were needed, and would be sent back to Fort Bragg, N.C., when tensions eased.