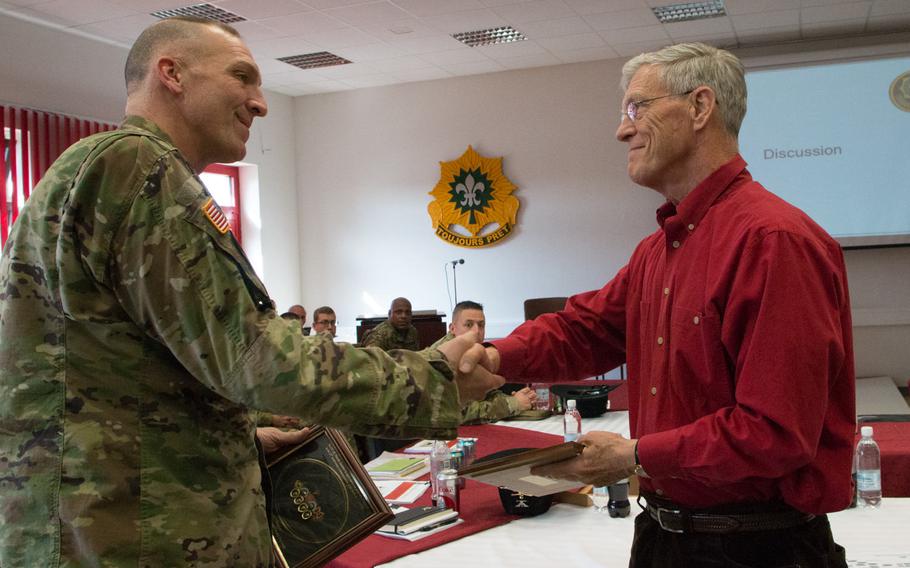 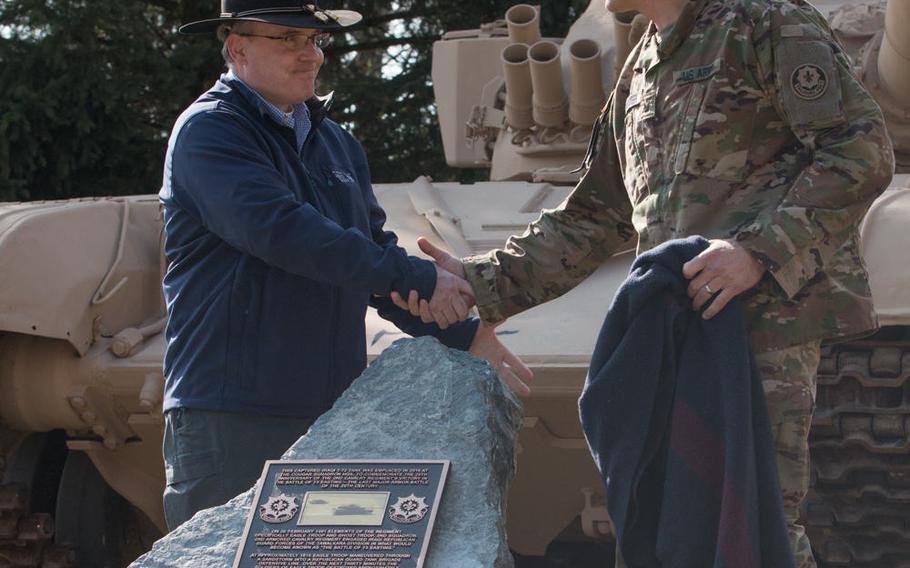 U.S. Army Lt. Col. Steven Gventer, right, and retired Lt. Col. Timothy Gauthier unveil a monument dedicated to the Battle of 73 Easting, on March 10, 2016, in Vilseck, Germany. This battle, in which Gauthier took part, was a decisive victory for the Army during the Gulf War. (Michael S. Darnell/Stars and Stripes) 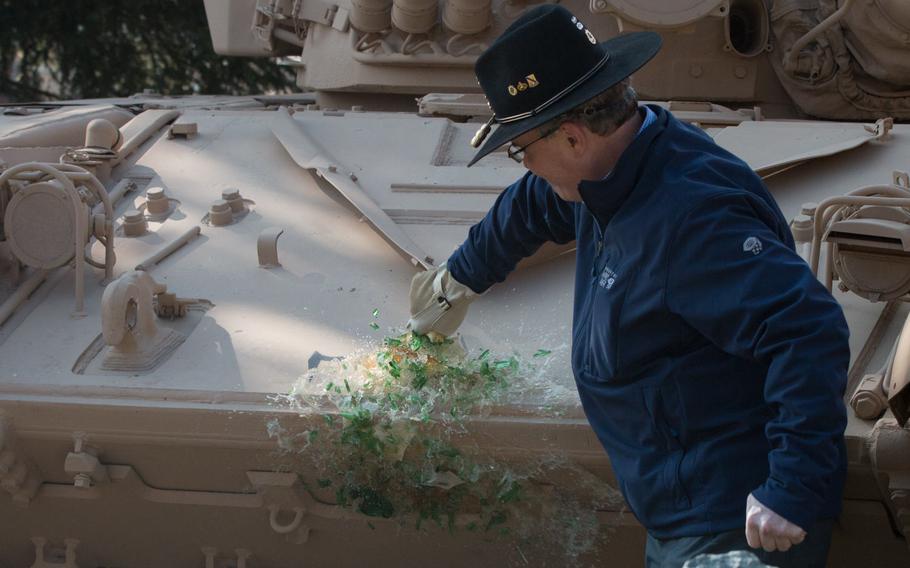 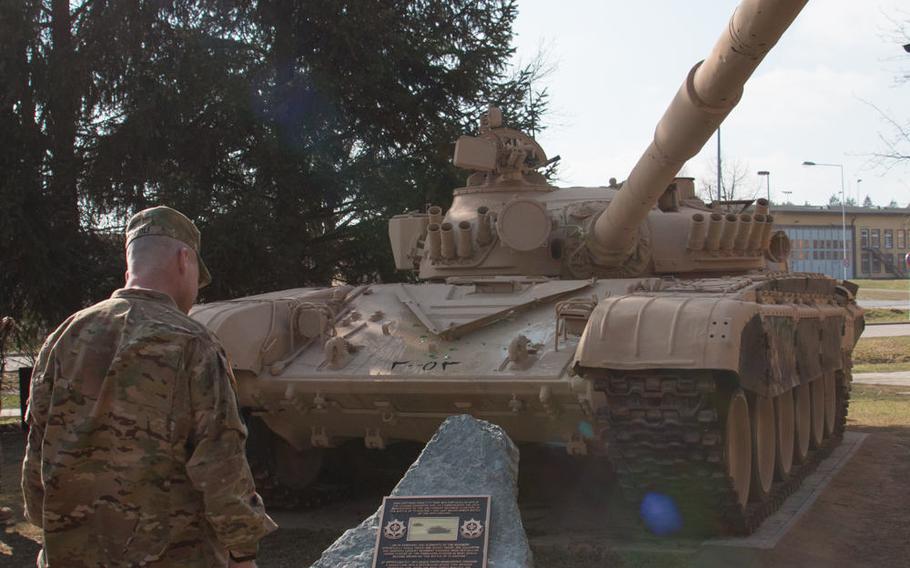 A 2nd Cavalry Regiment soldier stops to read a plaque dedicated to the Battle of 73 Easting in Vilseck, Germany, shortly after a dedication ceremony Thursday, March, 10, 2016. (Michael S. Darnell/Stars and Stripes) 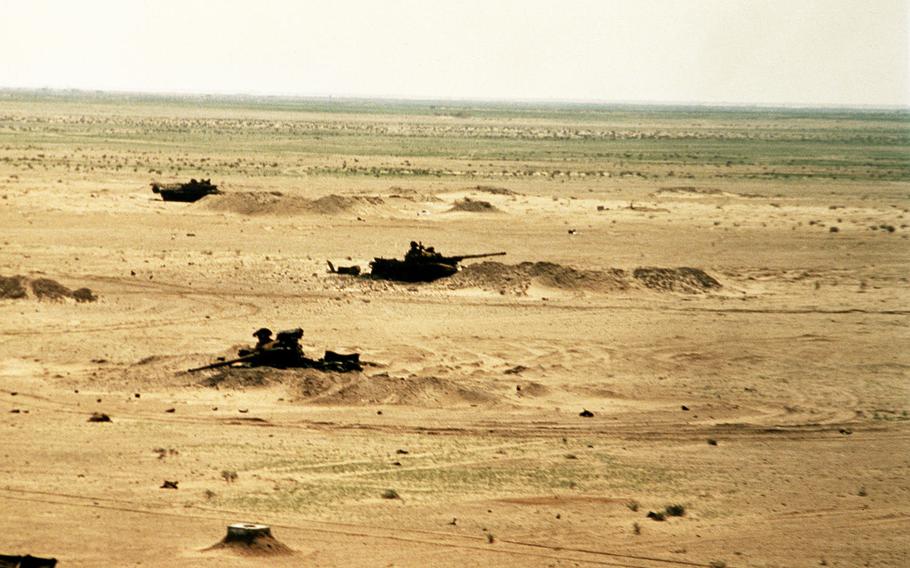 Burned out Iraqi T-72 tanks sit in the desert of southern Iraq during the Gulf War. (Courtesy National Archives) 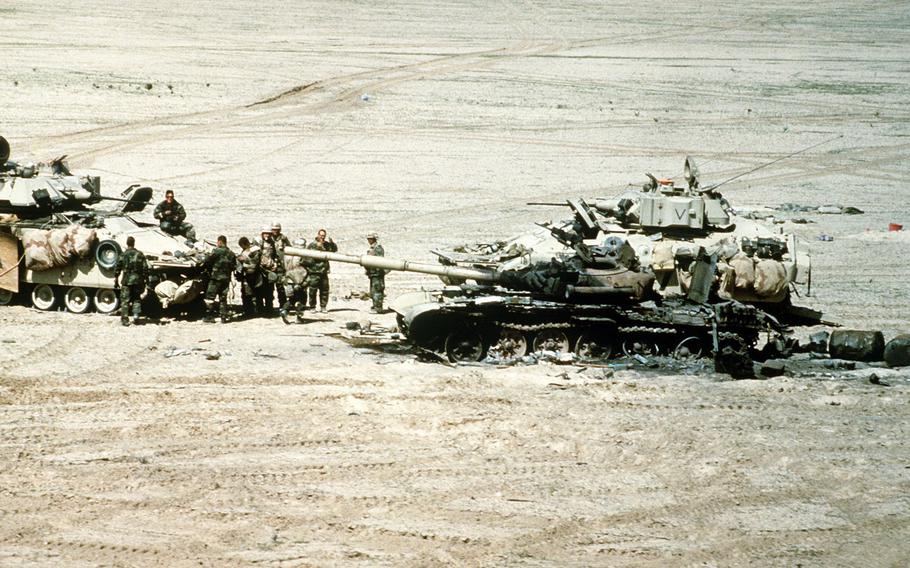 VILSECK, Germany — Of the battles that defined the Gulf War, few encapsulate the sense of outright superiority the U.S. displayed like the Battle of 73 Easting.

This hourslong engagement pit just part of the U.S. Army’s 2nd Armored Cavalry Regiment against Saddam Hussein’s elite Iraqi Republican Guard. When the smoke settled, one American soldier was dead, as were thousands of Iraqi combatants. An entire Iraqi division, the supposed elite Tawakalna, was practically wiped out.

On Thursday, the 2nd Squadron, 2nd Cavalry Regiment, honored that battle by dedicating a captured Iraqi T-72 tank as a memorial to that victory 25 years ago.

To help commemorate the event, the unit’s leaders brought in the former regimental commander of what was then the 2nd Armored Cavalry Regiment, retired Lt. Gen. Don Holder, and a platoon leader of the battle, retired Lt. Col. Tim Gauthier.

“It’s humbling in a way, but it’s also, I think, a part of my responsibility,” Holder said during an interview at the dedication. “I lead the regiment back in 1991 when this battle took place and it’s my part still to speak for the soldiers who were there at the time.”

That victory allowed the troops of the 1st Infantry Division to pass through their lines relatively unscathed. They would continue onward to engage in what would become known as the Battle of Norfolk, which effectively ended the war. The efforts of 2nd Squadron, 2nd Armored Cavalry Regiment, paved the way.

The Gulf War was, in many ways, a model of American military efficiency. While the timeline of most wars is marked off in years, even decades, Desert Storm was — from opening salvo to final shot — over in six weeks.

It was at 73 Easting — a coordinate line on a map — in 1991, that the 2nd Armored Cavalry Regiment served as the spearhead for the U.S. Army VII Corps’ push into Iraq. The primary mission was to scout ahead and clear a path for the larger 1st Infantry Division.

Of that force, 2nd Squadron, Eagle Troop, under the command of then-Capt. H.R. McMaster, was sent forward as the advance element. Alongside Capt. Joe Sartiano’s Ghost Troop, it formed the tip of the spear.

In an written account of the battle, McMaster — now a lieutenant general assigned to the U.S. Army Training and Doctrine Command — wrote he received word on Feb. 26 that Eagle Troop would be pushing toward the 70 Easting line.

“I told the Troop, ‘We attack in five minutes to the 70 Easting. This is the moment we have all awaited,’ ” he wrote in the “Battle of 73 Easting.”

As they moved across the desert, the troop’s 3rd Platoon came under fire from a cluster of buildings to the south. McMaster ordered his nine M1 Abrams tanks to form a firing line.

Within seconds, they obliterated all resistance.

At 4:19 p.m., McMaster’s men crested what he described as an “almost imperceptible rise.” On the other side, eight Republican Guard Tawakalna Division tanks were set in an ambush formation, dug into deep fighting holes.

“One of the critical factors in the success of the attack,” Gauthier said during a town hall meeting in Vilseck, “was the enemy commander … had made assumptions of where you can maneuver in the desert. They were at about a 25-30 degree offset and they were dug in that way. So in order to reorient on the contact, they actually had to back their tanks out of their fighting positions.”

As a result, McMaster destroyed three of the T-72 tanks in just 10 seconds. The rest of the tanks were quickly destroyed by Eagle Troop.

“In most cases, we killed the tanks before they even had a chance to move,” Gauthier said.

Eagle Troop pushed onward through constant fire and across a minefield. The soldiers tore through a cluster of buildings along the 70 Easting that the Iraqis converted to a makeshift stronghold.

McMaster wrote in his account of the battle that they were “cutting a five-kilometer wide swath of destruction through the enemy’s defense.”

At 4:40 p.m., Eagle Troop stopped short of the 74 Easting line, where it encountered and destroyed another tank unit consisting of 18 T-72s. A scout patrol encountered 13 more T-72s, which it promptly destroyed with tube-launched, optically tracked, wire-guided missiles.

“Our major portion of the fight ended in 23 minutes,” Gauthier said. Nobody from Eagle was killed in action.

Ghost Troop fought a longer battle, fending off three company-size attacks in three hours. Sgt. Nels A. Moller was the lone American killed during that battle.

That night, more than 40 Iraqis surrendered to Eagle Troop. They were all that remained of a 900-man battalion that had been outfitted with 39 tanks. Total Iraqi casualties numbered in the thousands, and more than a thousand prisoners of war were captured.

The troop passed most of the night in relative peace, according to Holder, receiving only sporadic gunfire. As dawn the scale of destruction became apparent.

More than 100 Iraqi armored vehicles lay in ruin. American artillery strikes had decimated a fleet of Iraqi trucks and leveled buildings stocked with ammunition, fuel and other supplies.

The dead lay where they had fallen.

The 2nd Squadron alone had destroyed the equivalent of an entire Republican Guard brigade. The Tawakalna was decimated and would later disband entirely because of losses suffered at 73 Easting and other battles.

“The day afterward when we drove back through the path of destruction,” Gauthier told Stars and Stripes, “that’s when that realization hit of the amount of death and destruction we had inflicted on them.”