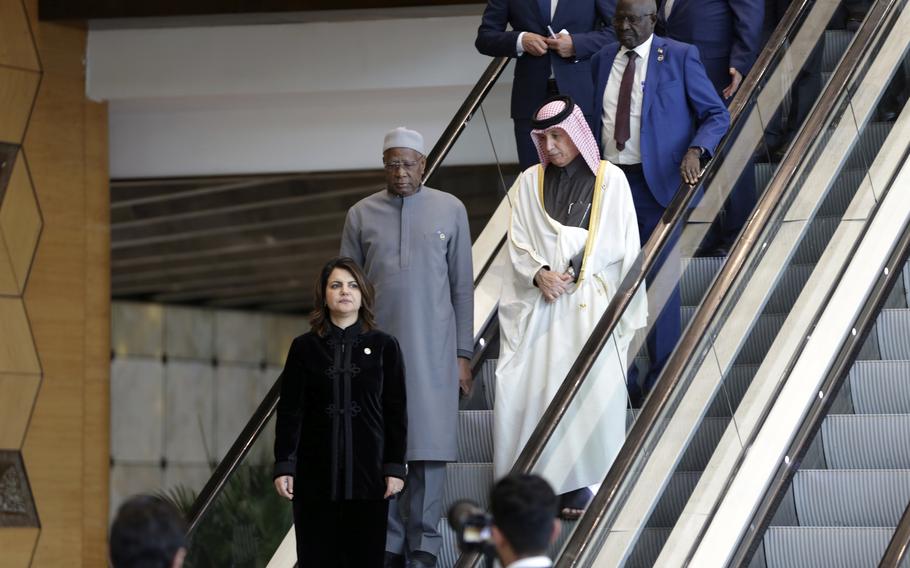 Libya’s Tripoli-based administration Foreign Minister Najla Mangoush descends an escalator during a meeting with other Arab chief diplomats in the capital of Tripoli, Sunday, Jan. 22, 2023. She is followed by Special Representative of the UN Secretary General to Libya Abdoulaye Bathily, and representatives from Qatar and Sudan. The gathering was boycotted by other Foreign Ministers who do not recognize the mandate of the Tripoli-based government. (Yousef Murad/AP)

CAIRO — A handful of top Arab diplomats met Sunday in the Libyan capital in a gathering boycotted by powerful foreign ministers who argued that the mandate of the Tripoli-based government has ended.

Five of the 22 member states of the Arab League sent their foreign ministers to the periodic, consultative meeting. They included the chief diplomats of neighboring Algeria and Tunisia, local media reported. Others sent their envoys to the meeting in Tripoli.

Among those boycotting the gathering was Egypt, which questioned the legitimacy of Prime Minister Abdel Hamid Dbeibah's government after Libya's east-based parliament appointed a rival premier last year. The foreign ministers of Gulf monarchies Saudi Arabia and the United Arab Emirates also did not attend, as well as Arab League Secretary-General Ahmed Aboul-Gheit.

Najla Mangoush, the foreign minister of Libya's Tripoli-based administration, said in televised comments they "insist on full exercise of Libya's rights" in the Arab League, in reference to the rotating leadership of the pan-Arab organization.

Ahead of Sunday's meeting, authorities in the Libyan capital granted a day off for civil servants and closed off major roads around the Mitiga airport, the only functional airport in the capital, and a luxury hotel where the gathering took place.

Prime Minister Fathy Bashagha, who chairs a rival government in the country's east, called the meeting a "farce" orchestrated by Dbeibah's administration to claim that it is the internationally recognized government in Libya. He hailed those who boycotted the meeting and called on Algeria and Tunisia to reconsider their Libya policies.

Libya's current political stalemate grew out of the failure to hold elections in December 2021 and Dbeibah's refusal to step down. In response, the country's east-based parliament appointed Bashagha, who has for months sought to install his government in Tripoli.

The protracted stand-off between the two governments led to bouts of clashes in Tripoli last year, risking the return of civil war to the oil-rich nation after months of relative calm.

Last month, the U.N.'s special envoy for Libya, Abdoulaye Bathily, warned that signs of partition are already evident, and the political crisis in the country "impacts people's wellbeing, compromises their security, and threatens their very existence."

The North African nation has plunged into chaos after a NATO-backed uprising toppled and killed longtime dictator Moammar Gadhafi in 2011. Libya has been virtually ruled by a set of rival militias and armed groups in the east and west.