Biden adviser meets Netanyahu amid unease over his government 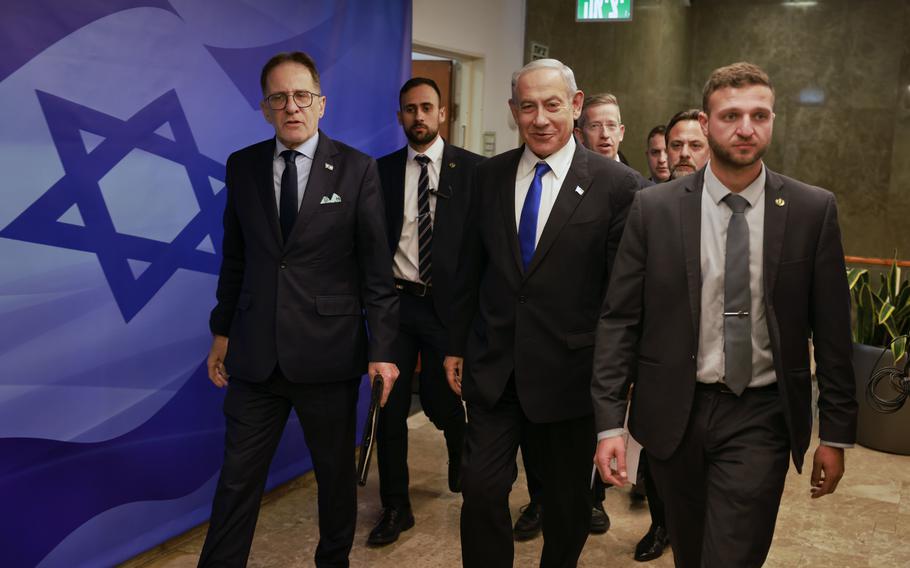 Sullivan's visit comes amid unease in Washington over Netanyahu's policies and over several members of his ultranationalist and ultra-Orthodox governing coalition, which is already taking a hard line against the Palestinians and is expected to ramp up construction in Jewish settlements in the occupied West Bank.

Later Thursday, Sullivan met with Palestinian President Mahmoud Abbas, who appealed to the Biden administration to stop the Israeli government from pressing ahead with escalatory measures against the Palestinians.

The new Israeli coalition's policies "are destroying the remaining chances of achieving peace and stability in the region," Abbas told Sullivan, according to a statement from his office. He urged the United States "to intervene before it is too late to stop these unilateral measures."

In Jerusalem, a statement from Netanyahu's office said the two discussed Iran's nuclear program and ways to broaden normalization agreements reached under the Trump administration with four Arab countries.

"I've known President (Joe) Biden for 40 years as a great friend of Israel," Netanyahu told Sullivan, according to footage released from the meeting. "We see you as a trusted partner in matters of assuring security and, of course, advancing peace."

Sullivan told Netanyahu that Biden's "commitment to the state of Israel is bone deep," a "commitment that's rooted in shared history, shared interests and shared values."

Israel's new government has already proven to be a headache for the Biden administration, with extremist Cabinet minister Itamar Ben-Gvir visiting a flashpoint Jerusalem holy site and the coalition taking combative steps against the Palestinian Authority that run counter to Biden's efforts to boost U.S.-Palestinian relations.

Netanyahu told Sullivan that the measures, including halting Palestinian construction in parts of the West Bank and withholding badly needed tax revenues from the PA that Israel collects on its behalf, represented a necessary response to the Palestinians pushing the U.N.'s highest judicial body to give its opinion on the Israeli occupation.

From Ramallah, the seat of the Palestinian Authority, Abbas stressed to Sullivan the importance of the U.S. exerting pressure on Israel to halt its settlement construction and its "daily killings and incursions into Palestinian cities and towns."

Two Palestinians were killed in an Israeli military arrest raid into Jenin refugee camp in the northern West Bank on Thursday. Last year was the deadliest for Palestinians in the West Bank in 18 years.

Abbas also called on Sullivan to reverse the Trump administration's punitive steps against the Palestinians by restoring the U.S. Consulate in Jerusalem that oversees American ties to Palestinians in the West Bank and reopening the Palestine Liberation Organization's office in Washington.

Israel's new far-right government and a potential escalation in the decades-old conflict is an unwelcome complication for a Biden national security team seeking to shift attention away from the Middle East and toward rivals like China and Russia. It also comes as Republicans take control of the House of Representatives and are eager to cast Biden as unfriendly to Israel ahead of the 2024 presidential election.

U.S. officials have previously expressed concerns about at least two far-right senior Cabinet ministers, Ben-Gvir and Bezalel Smotrich, who have expressed vehement anti-Palestinian views in the past. Nonetheless, Washington has said it will engage with Netanyahu's government based on its policies and not on personalities.

Ben-Gvir, a lawmaker known for anti-Arab vitriol and provocative stunts, is the minister of national security, a powerful position that puts him in charge of Israel's police force. Smotrich, leader of the Religious Zionism party, which shares anti-Palestinian and anti-gay views, oversees the Israeli defense body in charge of Palestinian civil affairs.

Sullivan also met Thursday with senior Israeli security officials, including the head of the Mossad. He and Israeli National Security Advisor Tzachi Hanegbi held virtual discussions with their Bahraini and Emirati counterparts about how to deepen cooperation in "clean energy, emerging technology, regional security, and commercial relations," the White House said. Israel normalized ties with Bahrain and the United Arab Emirates in U.S.-backed agreements in 2020.