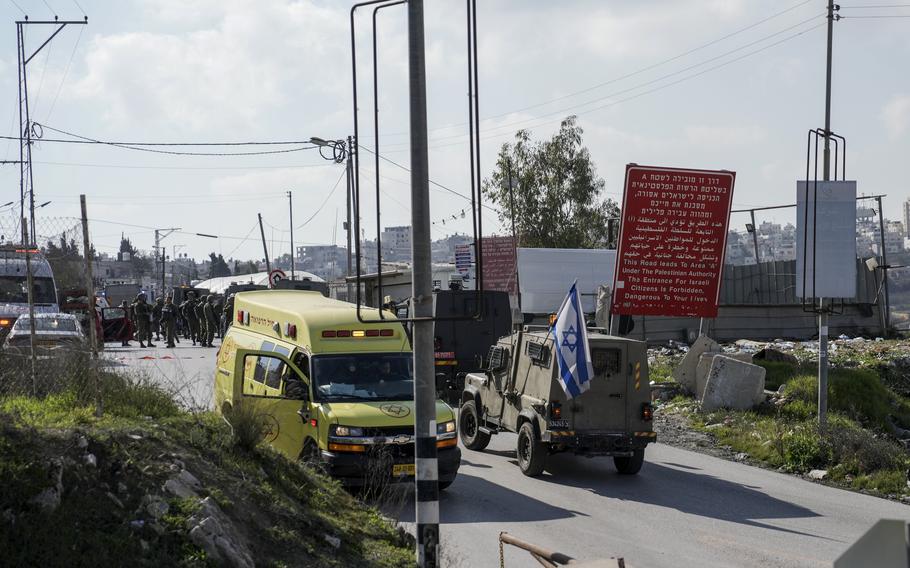 JERUSALEM — Israeli forces shot and killed a Palestinian militant in the occupied West Bank on Tuesday, the latest in a bout of surging violence between Israelis and Palestinians.

The Palestinian Health Ministry said the 40-year-old man, identified as Hamdi Shaker Abdullah Abu Dayyah, was shot and killed by Israeli forces in Halhul, north of the West Bank city of Hebron.

The Al-Aqsa Martyrs' Brigade — an armed militia affiliated with Fatah, the secular political party that controls the Palestinian Authority — claimed the man as a fighter and said he had also been an officer in the Palestinian security forces.

The Israeli military said in a statement that troops in the area were fired upon and returned fire. It added that Israeli forces were investigating reports that the killed Palestinian was connected to an earlier shooting attack on an Israeli bus.

Tensions have soared in the West Bank, where the Israeli military has been conducting near-nightly arrest raids since last spring, after a wave of Palestinian attacks against Israelis that killed 19 people. Another 10 Israelis were killed in a second string of attacks later last year.

Israel says the raids are meant to dismantle militant networks and thwart future attacks. The Palestinians see them as further entrenchment of Israel's open-ended, 55-year occupation of lands they seek for their future state.

On Monday, Israeli security forces shot and killed a 14-year-old Palestinian during an early morning raid in the West Bank, Palestinian health officials said. The Israeli army said forces entered the Dheisha camp and were bombarded by Molotov cocktails and rocks. It said soldiers responded with live fire.

Violence and unrest have raged for months in the West Bank, which Israel captured in the 1967 Mideast war, along with east Jerusalem and the Gaza Strip — territories the Palestinians want for their hoped-for state. Some half-million Israelis now live in about 130 settlements across the West Bank. The Palestinians and much of the international community view the settlements as an obstacle to peace.

Settler attacks in the West Bank have escalated in recent months, with the U.N. reporting last fall that Israeli settlers and civilians perpetrated over a hundred attacks against Palestinians last year, resulting in damage to Palestinian property and dozens of Palestinian injuries.

On Tuesday, the United States condemned an assault against a group of hikers, among them Palestinians and Americans, that happened last Friday at a nature reserve north of the West Bank city of Jericho.

Footage widely shared online shows Israeli settlers, cloaked in hoodies and waving sticks, ambushing the hikers from behind on a dirt path. Women scream and cry as one of the settlers hits them with his club. "I'll break your head!" he shouts at them in Arabic. The Israeli police have not announced any arrests of the suspects.

"Those who incite violence and exacerbate tensions must stop," it said.

Nearly 150 Palestinians were killed by Israeli fire in the West Bank and east Jerusalem in 2022, according to figures by the Israeli rights group B'Tselem, making it the deadliest year since 2004.

Israel says most of the dead were militants. But Palestinian stone-throwers, youths protesting the incursions and others not involved in confrontations also have been killed.