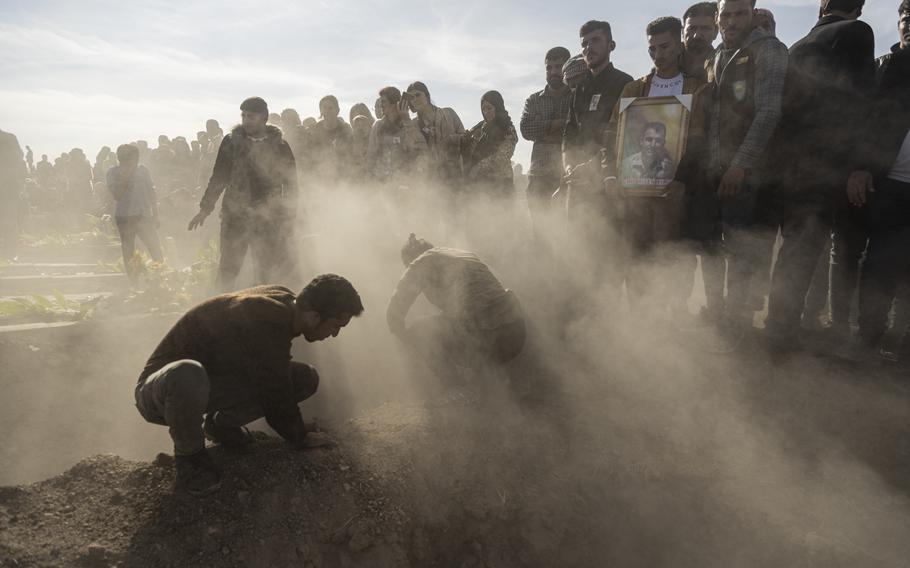 Syrian Kurds attend a funeral of people killed in Turkish airstrikes in the village of Al Malikiyah , northern Syria, Monday, Nov. 21, 2022. The airstrikes, which Turkey said were aimed at Kurdish militants whom Ankara blamed for a deadly Nov. 13 bombing in Istanbul, also struck several Syrian army positions in three different provinces along the border with Turkey. (Baderkhan Ahmad/AP)

Turkey has launched a barrage of airstrikes on suspected militant targets in northern Syria and Iraq in recent days, in retaliation for a deadly Nov. 13 bombing in Istanbul that Ankara blames on the Kurdish groups. The groups have denied involvement in the bombing, and say Turkish strikes have killed civilians and threatened the fight against the Islamic State group.

Ankara's allies, particularly Russia, have attempted to avert a ground incursion, but Erdogan said Wednesday in a speech to his ruling party's legislators in Ankara that the air operations are "just the beginning" and that Turkey is determined to "close down all of our southern borders ... with a security strip that will prevent the possibility of attacks on our country."

Turkey has carried out a series of incursions into Syria since 2016 and already controls parts of northern Syria. Erdogan said the new military offensive, planned to take place "at the most convenient time for us" would target the regions of Tel Rifaat, Manbij and Kobani, which is also known by its Arabic name Ayn Al Arab.

"The day is near when those concrete tunnels which the terrorists use for safety will become their graves," he said.

The commander of the Kurdish-led Syrian Democratic Forces in northeast Syria, meanwhile, said his group is prepared to repel a ground invasion by Turkey.

SDF head Mazloum Abdi told the The Associated Press that his group has been preparing for another such attack since Turkey launched a ground offensive in the area in 2019 and "we believe that we have reached a level where we can foil any new attack. At least the Turks will not be able to occupy more of our areas and there will be a great battle."

He added, "If Turkey attacks any region, the war will spread to all regions ... and everyone will be hurt by that."

Russian presidential envoy in Syria Alexander Lavrentyev said that Turkey should "show a certain restraint" in order to prevent an escalation in Syria and expressed hope that "it will be possible to convince our Turkish partners to refrain from excessive use of force on Syrian territory."

Mazloum called on Moscow and Damascus, as well as on the U.S.-led coalition fighting against the Islamic State group in Syria, with which allied with Kurdish fighters in the area, to take a stronger stance to prevent a Turkish ground invasion, warning that such an action could harm attempts to combat a resurgence of IS.

Late Wednesday, Turkish airstrikes also hit near the al-Hol camp in Hassakeh province where tens of thousands of wives, widows, and children of Islamic State group militants are held. SDF forces and a camp official said the strikes appeared to target security forces in charge of keeping the crime-ridden camp secure.

Sheikhmous Ahmad, a Kurdish official overseeing camps for displaced people in northeast Syria, said that some detainees tried to escape.

"The security forces currently have Al-Hol camp under control, but that could change if these attacks continued and the detainees could disperse in the area," Ahmad told the AP. "This would also threaten international security, not just our own."

A U.S. Central Command spokesperson said that one of the Turkish strikes on Tuesday had hit within 300 meters of US personnel, adding, "These strikes continue to put U.S. forces at risk." He declined to say where the site that had been struck was.

The Turkish airstrikes, which have killed a number of Syrian army soldiers operating in the same area as the SDF forces, have also threatened to upset a nascent rapprochement between Damascus and Ankara. The two have been on opposing sides in Syria's civil war but in recent months have launched low-level talks.

Soner Cagaptay, director of the Turkish Research Program at the Washington Institute for Near East Policy said that the events unfolding "will probably culminate in a Turkish incursion into Syria," but perhaps not immediately.

"I think Ankara is aligning the two stars required for an incursion into Syria, the stars being the American star and the Russian star," Cagaptay said, noting that Washington and its allies need Turkey's support to give NATO membership to Finland and Sweden, while Russia is angling for a deal between Ankara and Damascus that could "wrap up the war" in Syria.